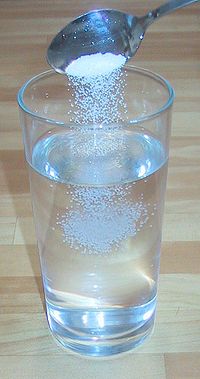 Making a saline water solution by dissolving table salt (NaCl) in water. The salt is the solute and the water the solvent. 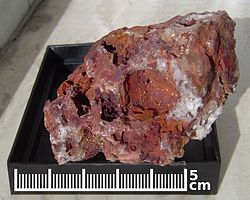 Dissolution is the process by which a solid, liquid or gas forms a solution in a solvent. In solids this can be explained as the breakdown of the crystal lattice into individual ions, atoms or molecules and their transport into the solvent. For liquids and gases, the molecules must be compatible with those of the solvent for a solution to form. The process of dissolution is governed by the thermodynamic energies involved, such as the heat of solution and entropy of solution. Overall the free energy must be negative for dissolution to occur. In turn, those energies are controlled by the way in which different chemical bond types interact with those in the solvent. Solid solutions occur in metal alloys and their formation and decription is governed by the relevant phase diagram.

Dissolution testing is widely used in the pharmaceutical industry for optimization of formulation and quality control.

For ionic compounds, dissolution takes place when the compounds ionize. This most commonly occurs in polar solvents, such as water or ammonia.

In a colloidal dispersed system, ion dissolution arises, where the dispersed particles exist in equilibrium with their saturated counter part, i.e.

The behavior of this system is characterised by the activity coefficients of the components and the solubility product, defined as:

The ability of an ion to preferentially dissolve (as a result of unequal activities) is classified as the Potential Determining Ion. This in turn results in the remaining particle possessing either a net positive/negative surface charge.

Other solid compounds experience dissolution as a breakdown of their crystal lattice, and due to their polarity, or non-polarity, mix with the solvent. The solubility of ionic salts in water is generally determined by the degree of solvation of the ions by water molecules. Such coordination complexes occur by water donating spare electrons on the oxygen atom to the ion.

The solubility of polymers depends on the chemical bonds present in the backbone chain and their compatibility with those of the solvent. The Hildebrand solubility parameter is commonly used to evaluate polymer solubility. The closer the value of the parameters, the more likely dissolution will occur.

Compounds in a fluid state may also dissolve in another liquid depending on the compatibility of the chemical and physical bonds in the substance with those of the solvent. Hydrogen bonds play an important role in aqueous dissolution.

Compounds in the gaseous state will dissolve in liquids dependent on the interaction of their bonds with the liquid solvent.

The rate of dissolution depends on:

The rate of dissolution can be often expressed by the Noyes-Whitney equation of the form:

For dissolution limited by diffusion, Cs is equal to the solubility of the substance.