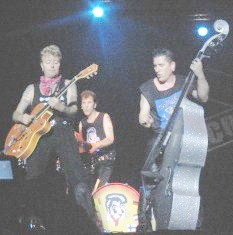 The Stray Cats are a band formed in 1979 by guitarist/vocalist (Bloodless Pharaohs/) with school friends and in the town of . The group had several hit singles in the UK and the US during the early 1980s.

Formation and move to UK

The group, whose style was based upon the sounds of Sun Records artists from the 1950s and heavily influenced by , had little initial success in the New York music scene. When Setzer heard that there was a revival of the 1950s youth subculture in England, the band moved to the UK. The band found themselves in the midst of a nascent rockabilly revival, with youth wearing drape jackets, brothel creepers and updating the 1950s look by using hairspray instead of grease to style their hair and by wearing bright, "loud" colours.

After a gig in London, Stray Cats met producer , well known as a enthusiast for his work with and as a solo artist. Edmunds offered to work with the group, and they entered the studio to record their self-titled debut album, "Stray Cats", released in England in 1981 on . The had three hits that year with "Runaway Boys", "," and "." The UK follow-up to "Stray Cats", "", was not as well-received, providing no hits and receiving some negative reviews.

Return to the US

The band returned to the United States, signed with , and in 1982 released "", a combination of their earlier LPs. "Rock This Town" and "Stray Cat Strut" hit the top of the American charts thanks to MTV airplay. The follow-up, "", was almost as successful. Helped by extensive airplay on the newly-launched , "Rock This Town" and "Stray Cat Strut" both hit the American Top Ten, over a year after their British chart peaks. As a result, "Built for Speed" was a left-field smash, and Stray Cats became icons of retro style. Their second American album, "Rant N' Rave With The Stray Cats", appeared in 1983 and produced another Top Ten hit in the #5 hit song "(She's) Sexy + 17," as well as a minor Top 40 entry in the doo wop-styled ballad "I Won't Stand in Your Way."

Personality conflicts began to emerge in the ways that the individual members handled their new-found success; Phantom married actress , while Setzer made guest appearances with stars like and and became the concert guitarist for 's side project. In late 1984, Setzer broke up the band. Rocker and Phantom formed a trio called Phantom Rocker & Slick (the "Slick" being former guitarist ), while Setzer went on to a solo career, exchanging his rockabilly focus for a more wide-ranging / sound on albums such as 1986's "The Knife Feels Like Justice".

In 1986, the Stray Cats reunited in Los Angeles, and recorded the covers-heavy "Rock Therapy", which sold poorly. In 1989, they reunited once again for the album "", which was accompanied by a tour with US blues guitarist . No longer with , they entered the studio with for the lackluster "Let's Go Faster", issued by in 1990. 1992's Dave Edmunds-produced "Choo Choo Hot Fish" also attracted little attention, and after another covers album, "Original Cool", the group called it quits again.

However, after a dozen years apart, Stray Cats reunited for a month-long tour of Europe in 2004. A live album culled from those concerts, "Rumble In Brixton", included one new studio track, "Mystery Train Kept A Rollin'." In 2007, they reunited once again for a successful and long awaited US tour with and the Pretenders. This was their first North American tour in over 15 years. In the 2000s, the band toured as part of their "Farewell Tour".

Stray Cats have reunited periodically for live performances. Setzer is still part of his 1990s swing-revival band . Rocker and Phantom went on to form Swing Cats as well as releasing some solo material. Slim Jim Phantom also plays the drums in another rockabilly band 13 Cats, as well as the band The Head Cat with () and Danny B. Harvey (13 Cats). The band was inducted into the [http://www.limusichalloffame.org] on , .