Leopold Ritter[1] von Sacher-Masoch (27 January 1836 – 9 March 1895) was an Austrian writer and journalist, who gained renown for his romantic stories of Galician life. The term masochism is derived from his name.

During his lifetime, Sacher-Masoch was well known as a man of letters, a utopian thinker who espoused socialist and humanist ideals in his fiction and non-fiction. Most of his works remain untranslated into English. The novel Venus in Furs is his only book commonly available in English.

Statue of Leopold von Sacher-Masoch in front of his birthplace in Lviv, Ukraine by sculptor Volodymyr Tsisaryk.

Von Sacher-Masoch was born in the city then known as Lemberg, the capital of the Kingdom of Galicia and Lodomeria, at the time a province of the Austrian Empire (now Lviv, Ukraine), into the Roman Catholic family of an Austrian police director of Spanish descent and Charlotte von Masoch, a Ukrainian noblewoman.[2] He began learning German at age 12. He studied law, history and mathematics at Graz University, and after graduating moved back to Lemberg where he became a professor. His early, non-fictional publications dealt mostly with Austrian history. At the same time, Masoch turned to the folklore and culture of his homeland, Galicia. Soon he abandoned lecturing and became a free man of letters. Within a decade his short stories and novels prevailed over his historical non-fiction works, though historical themes continued to imbue his fiction.

The Legacy of Cain

In 1869 Sacher-Masoch conceived a grandiose series of short stories under the collective title Legacy of Cain that would represent the author's aesthetic Weltanschauung. The cycle opened with the manifesto The Wanderer that brought out misogynist themes that became peculiar to Masoch's writings. Of the six planned volumes, only the first two were ever completed. By the middle of the 1880s, Masoch abandoned the Legacy of Cain. Nevertheless, the published volumes of the series included Masoch's best-known stories, and of them, Venus in Furs (1869) is the most famous today. The short novel expressed Sacher-Masoch's fantasies and fetishes (especially for dominant women wearing fur). He did his best to live out his fantasies with his mistresses and wives. 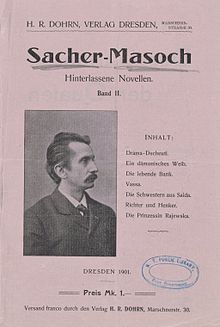 A Sacher-Masoch compilation published in 1901.

Sacher-Masoch edited the Leipzig-based monthly literary magazine Auf der Höhe. Internationale Review (At the Pinnacle. International Review), which was published from October, 1881 to September, 1885. This was a progressive magazine aimed at tolerance and integration for Jews in Saxony, as well as for the emancipation of women with articles on women's education and suffrage.

In his later years, he worked against local antisemitism through an association for adult education called the Oberhessischer Verein für Volksbildung (OVV), founded in 1893 with his second wife, Hulda Meister.[3]

On 8 December 1869, Sacher-Masoch and his mistress Baroness Fanny Pistor signed a contract making him her slave for a period of six months, with the stipulation that the Baroness wear furs as often as possible, especially when she was in a cruel mood. Sacher-Masoch took the alias of "Gregor," a stereotypical male servant's name, and assumed a disguise as the servant of the Baroness. The two traveled by train to Italy. As in Venus in Furs, he traveled in the third-class compartment, while she had a seat in first-class, arriving in Venice (Florence, in the novel), where they were not known, and would not arouse suspicion.[4]

Sacher-Masoch pressured his first wife, Aurora von Rümelin, whom he married in 1873, to live out the experience of the book, against her preferences. Sacher-Masoch found his family life to be unexciting, and eventually got a divorce and married his assistant.

In 1875 Masoch wrote The Ideals of Our Time, an attempt to give a portrait of German society during its Gründerzeit period.

In his late fifties, his mental health began to deteriorate, and he spent the last years of his life under psychiatric care. According to official reports, he died in Lindheim, Germany in 1895. It is also claimed that he died in an asylum in Mannheim in 1905.[5]

Sacher-Masoch is the great-great-uncle to the British singer and actress Marianne Faithfull on her mother's side, the Viennese Baroness Eva Erisso.

The term masochism was invented in 1886 by the Austrian psychiatrist Richard Freiherr von Krafft-Ebing (1840–1902) in his book Psychopathia Sexualis:

...I feel justified in calling this sexual anomaly "Masochism," because the author Sacher-Masoch frequently made this perversion, which up to his time was quite unknown to the scientific world as such, the substratum of his writings. I followed thereby the scientific formation of the term "Daltonism", from Dalton, the discoverer of colour-blindness.

During recent years facts have been advanced which prove that Sacher-Masoch was not only the poet of Masochism, but that he himself was afflicted with the anomaly. Although these proofs were communicated to me without restriction, I refrain from giving them to the public. I refute the accusation that 'I have coupled the name of a revered author with a perversion of the sexual instinct,' which has been made against me by some admirers of the author and by some critics of my book. As a man Sacher-Masoch cannot lose anything in the estimation of his cultured fellow-beings simply because he was afflicted with an anomaly of his sexual feelings. As an author he suffered severe injury so far as the influence and intrinsic merit of his work is concerned, for so long and whenever he eliminated his perversion from his literary efforts he was a gifted writer, and as such would have achieved real greatness had he been actuated by normally sexual feelings. In this respect he is a remarkable example of the powerful influence exercised by the vita sexualis be it in the good or evil sense over the formation and direction of man's mind.[6]

Sacher-Masoch was not pleased with Kraft-Ebing's assertions. Nevertheless, details of Masoch's private life were obscure until Aurora von Rümelin's memoirs, Meine Lebensbeichte (1906), were published in Berlin under the pseudonym Wanda v. Dunajew. The following year a French translation, Confession de Ma Vie (1907), by "Wanda von Sacher-Masoch" was printed in Paris by Mercure de France. An English translation of the French edition was published as The Confessions of Wanda von Sacher-Masoch (1991) by RE/Search Publications.