IEC 60906-1 is an international standard for 230 V AC domestic power plugs and sockets. It was intended to become the common mains plug and socket standard, to be used one day everywhere in Europe and other regions with 230 V mains. The standard was published by the International Electrotechnical Commission in 1986. So far, only Brazil and South Africa introduced a standard based on it. The biggest differences being that in parts of Brazil the mains voltage are 127 V and 220 V and the introduced standard has a pin diameter of 4mm for the 10A plug and 4.8mm for the 20A plug, while the original standard has a single pin diameter of 4.5mm and a maximum current of 16A.[1] Although it looks similar to the Swiss plug, its dimensions are different.

This article is only about part one of this standard. Part two, IEC 60906-2, defines a global standard plug for 115 V mains. It is compatible with the systems used today in North America and Japan. Part three, IEC 60906-3, defines a family of extra low voltage connectors.

The IEC 60906-1 system is rated for AC voltages up to 250 V and currents up to 16 A. It defines both 3-pin connectors for Class I appliances and 2-pin versions for Class II appliances.

The plug has round live and neutral pins 19 mm apart, with insulating sleeves. It is smaller than current European plugs with the same current rating.

The socket has either a 10 mm deep recess or a 12 mm high rim, to exclude incompatible plugs. It ensures that the protective-earth pin establishes contact before the live and neutral pins. The socket can have shutters for the live and nuetral sockets, and is small enough that two can be installed in the space taken by a single Schuko or BS 1363 socket.

For most existing European systems (Schuko, etc.), it would be possible to design sockets that can accept both the traditional plug as well as the IEC 60906-1 Class I and II plugs, thereby enabling a smooth transition to the new system. However, the IEC 60906-1 standard explicitly discourages the use of multi-standard sockets, claiming that such sockets are likely to create safety problems when used with plugs from other countries. 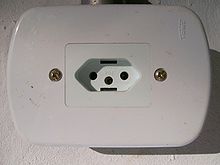 Thanks to modern injection molding technology, robust and safe plugs can have much smaller dimensions today than what was considered feasible when the old Schuko and BS 1363 systems were designed in the early and mid 20th century.

The IEC 60906-1 system features many of the advantages of the BS 1363 plug, but avoids the problem of incompatibility with the Europlug. It is smaller than a BS 1363 plug, and is rated for 16 amps instead of 13. The flat design avoids the risk of stepping on upward-facing pins.

However, IEC 60906 does not mandate a fuse in each plug. It may well be feasible to design IEC 60906-1 plugs with an integrated fuse. Handing over the protection measures to sockets would violate British wiring rules because each plug is hardwired to its power cord and each power cord, depending on wire thickness, requires an appropriate fuse. The socket can not have a universal fuse which would match the power cord's current capacity of each appliance. The other way to meet British wiring rules is to use power cord for 16 Amps (maximum for IEC 60906-1) regardless of device power rating (which would be wasteful of copper and make cords on small appliances unnecessairly bulky and heavy). Also the plug is unlikely to have as low a profile to the wall, making use behind cupboards harder. (It is technically possible to make an IEC 60906-1 plug/socket combination with a similar profile to a BS 1363, but only if the socket has a recess and the cord exit angle exceeds the recommendations of the specification.)

The IEC 60906-1 system also avoids the problems of the Schuko system currently used in most of Europe and large parts of Asia:

Although the IEC 60906-1 plug looks remarkably similar to the Swiss SEV 1011 plug, there are a number of significant differences. The Swiss plug has no insulating sleeves and has smaller pins with different spacing.

The Class I and II plugs' shapes are similar to the Europlug; their front profile is also a flat hexagon, but it is slightly thicker. Both plugs are 35.5 mm wide. The 3-pin Class I plug is 17 mm high, whereas the 2-pin Class II plug is with only 14 mm slightly slimmer (the Europlug is only 0.3 mm smaller). The parallel side faces are 26 mm apart, and the two pairs of side faces are orthogonal to each other. As on the Schuko plug, the live and neutral pin have 19 mm center distance and 19 mm length. However, their diameter is 4.5mm, unlike the Schuko and the Class I-lookalike Brazilian 20-amp NBR 14136 plug, which both have 4.8mm pin diameter, while the 10A Brazilian plug has a diameter of 4mm. A further distinction with the Schuko plug is the insulating sleeve around the base of the live and neutral pin (as on the Europlug). The 3-pin version also has a round protective-earth pin. It has the same length and diameter as the live and neutral pins, but lacks an insulating sleeve. The protective-earth pin's center is offset 3 mm from the center point between the live and neutral pin.

In addition to the hexagonal Class I and Class II plugs and sockets, Appendix A of the standard also defines a 2-pin plug and socket with oval profile, for countries that still permit the use of Class 0 appliances, which are considered unsafe in most industrialised countries today. The Class II plug fits also into Class 0 sockets; it is up to national regulations of countries using the Class 0 socket, whether they permit an additional dummy hole in it, such that even Class I plugs will fit. However, none of the Class 0 plugs fit into a Class I or Class II socket. This way, the system prevents that Class 0 equipment can be operated easily in regions that do not permit such devices. The full mateability matrix of all plugs and sockets defined in IEC 60906-1 looks like this:

As a result of the increasing global harmonization of electrical safety standards, IEC is phasing out the entire concept of Class 0 appliances from its standards. It is therefore unlikely that the oval Class 0 plug and socket variant will ever be introduced anywhere. The appendix that introduces it was probably merely added to address the concern that a system of country-independent plugs and sockets could permit the easy use of imported Class 0 equipment that does not meet national safety standards.