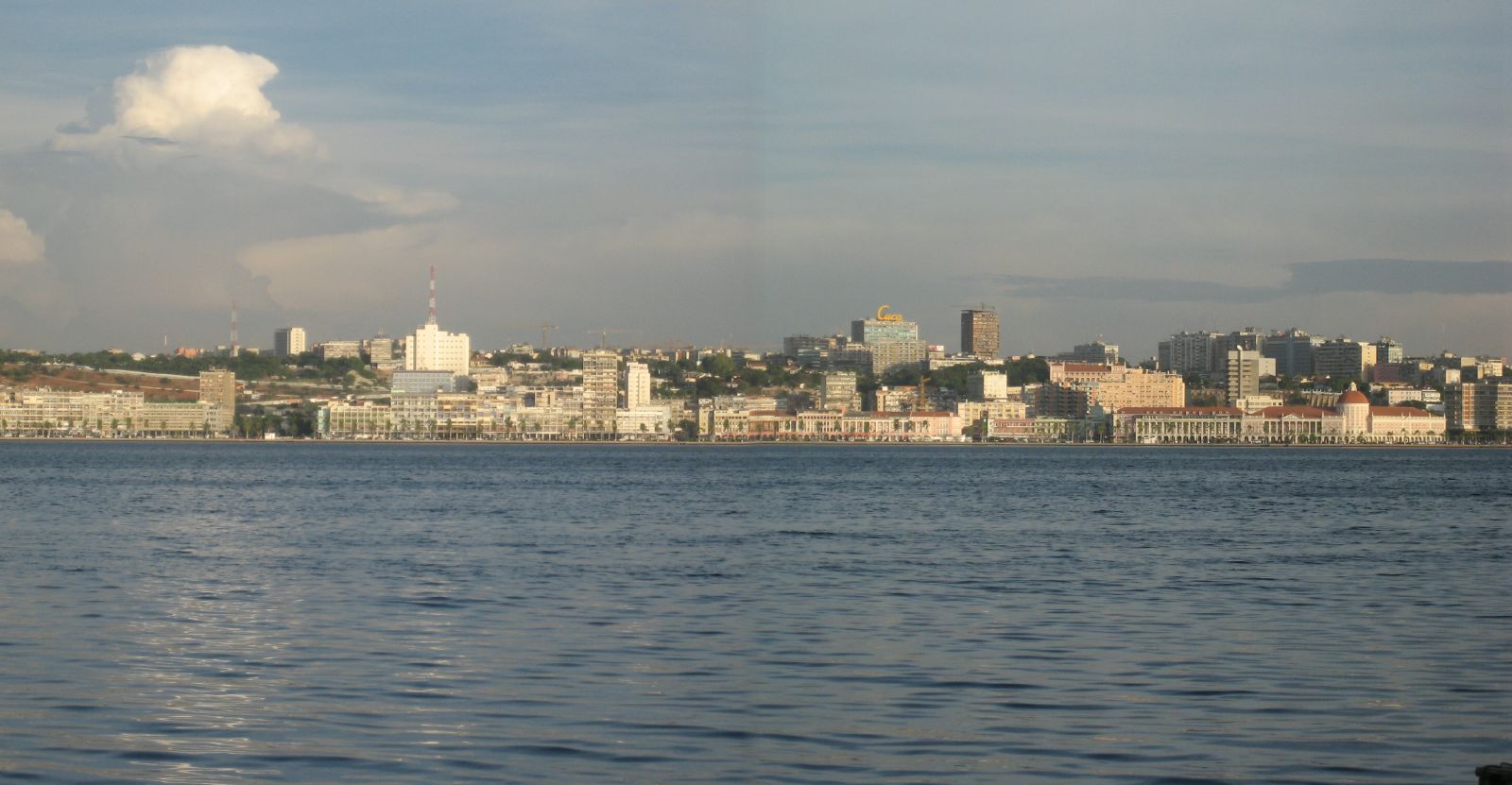 Portuguese explorer founded Luanda in 1575 as "São Paulo de Loanda", with a hundred families of settlers and four hundred soldiers. In the Portuguese built the fortress called , and in they built another fortress: . Luanda was Portuguese Angola's administrative centre from , with one exception: the Dutch ruled Luanda from to as Fort Aardenburgh. The city served as the centre of a large slave trade to from c. to . The slave trade was conducted mostly with the Portuguese colony of Brazil; Brazilian ships were the most numerous in the ports of Luanda and Benguela. By this time, Angola, a Portuguese colony, was in fact like a colony of Brazil, paradoxically another Portuguese colony. A strong degree of Brazilian influence was noted in Luanda until the in 1822. In the 19th century, still under Portuguese rule, Luanda experienced a major economic revolution. The was abolished in 1836, and in 1844 Angola's ports were opened to foreign shipping. By 1850, Luanda was one of the greatest and most developed Portuguese cities in the vast outside , full of trading companies, exporting (together with ) palm and peanut oil, wax, copal, timber, ivory, cotton, coffee, and cocoa, among many other products. Maize, tobacco, dried meat and cassava flour also began to be produced locally. The Angolan bourgeoisie was born by this time. In Governor Brito Capelo opened the gates of an aqueduct which supplied the city with water, a formerly scarce resource, laying the foundation for major growth. Like most of Angola, the city of Luanda was not affected by the (1961-1974); economic growth and development in the entire region reached record highs during this period. In a report called Luanda the " of ".

By the time of Angolan in , Luanda was a modern city and the majority of the city's population was of Portuguese origin. With the advent of independence and the start of the (1975-2002), most of the Portuguese left as , principally for Portugal, with many travelling overland to South Africa. There was an immediate crisis, because the local African population lacked the skills and knowledge needed to run the city and maintain its infrastructure. The large numbers of skilled technicians among the force of n soldiers sent in to support the government in the were able to make a valuable contribution to restoring and maintaining basic services in the city. However, called "musseques" stretched for miles beyond Luanda's former city limits, as a result of the decades-long civil war, and because of the rise of deep social inequalities due to large-scale migration of civil war refugees from other Angolan regions. For decades, Luanda's facilities were not adequately expanded to handle this massive increase in the city's population. After 2002, with the end of the civil war and high economic growth rates fuelled by the wealth provided by the increasing oil and diamond production, major reconstruction started.

Luanda is the seat of a archbishop. It is also the location of most of Angola's educational institutions, including the private and the public . It is also the home of the colonial Governor's Palace and the (the "Citadel Stadium"), Angola's main stadium, with a total seating capacity of 60,000.

The climate is hot and humid but surprisingly dry, owing to the cool , which prevents moisture from easily condensing into rain. Frequent fog prevents temperatures from falling at night even during the completely dry months from June to October. Luanda has an annual rainfall of convert|323|mm|in|1, but the variability is among the highest in the world, with a co-efficient of variation above 40 percent [Dewar, Robert E. and Wallis, James R; "Geographical patterning in interannual rainfall variability in the tropics and near tropics: An L-moments approach"; in "Journal of Climate", 12; pp. 3457-3466] . The short rainy season in March and April depends on a northerly counter current bringing moisture to the city: it has been shown clearly that weakness in the Benguela current can increase rainfall about sixfold compared with years when that current is strong.

The inhabitants of Luanda are primarily members of n ethnic groups, including the , and tribes. The official and the most widely used language is Portuguese, although many Bantu-related indigenous languages are also used. There is a small population of an origin.

The population of Luanda has exploded in recent years, due in large part to war-time migration to the city, which is safe compared to the rest of the country. [ [http://www.washingtonpost.com/wp-adv/specialsales/spotlight/angola/article8.html International Spotlight: Angola ] ] However, Luanda has recently seen an increase in violent crime, particularly in the shanty towns that surround the colonial urban core. [ [http://www.globalsecurity.org/military/library/news/2006/03/mil-060314-irin01.htm ANGOLA: Easy access to guns concern as election nears ] ]

Manufacturing includes processed foods, beverages, textiles, cement and other building materials, plastic products, metalware, cigarettes, and shoes. Petroleum (found in nearby off-shore deposits) is refined in the city, although this facility was repeatedly damaged during the (1975 – 2002). Luanda has an excellent natural harbour; the chief exports are , , , s, , and . The city also has a thriving building industry, an effect of the nationwide economic boom experienced since 2002, when political stability returned with the end of the civil war. Economic growth is largely supported by activities, although massive is taking place, so in-turn future generations will be dependent off oil exports. Large (Domestic and International), along with strong economic growth, has dramatically increased construction of all economic sectors in the city of Luanda. [http://www.economist.com/displaystory.cfm?story_id=10316212]

Luanda is the starting point of the that goes due east to , but does not reach Congo-Kinshasa. The civil war left the railway non-functional, but a Chinese firm has taken up a contract to rebuild many Angolan railways, including the Luanda Railway which has already been completed. [http://www.chinainternationalfund.com/projects1.asp?Id=284]

The main airport of Luanda is , which acts as the largest in the country. Currently, Luanda has a major under construction is the southern part of the city, which is expected to be opened in 2011. [http://www.chinainternationalfund.com/projects1.asp?Id=283]

The port of Luanda is currently serves as the largest of , and connects Angola to the rest of the world. Major of this port is also taking place, with the completion of a new complex just last year, the port is rapidly. [http://www.scottwilson.com/projects/transportation/maritime/luanda_oil_service_centre.aspx]

Luanda's roads are currently in a poor state of repair, but are currently undergoing a massive process by the government in order to relieve congestion in the city. Major road repairs can be found taking place in nearly every neighborhood, including a major 6-lane connected Luanda to , which is nearing partial completion in October. [http://allafrica.com/stories/200808180008.html] Many of the citizens of Luanda rely on privately owned combi taxis for transport, although recently the city has invested more into a public bus system.

Angola, which is forecast to be the worlds fastest growing economy [http://www.economist.com/displaystory.cfm?story_id=10316212] , has been undergoing a massive national reconstruction. The central government allocates funds to all regions of the country, but the capital region receives the bulk of these funds. Since the end of the (1975-2002), stability has been widespread in the country, and major reconstruction has been ongoing since 2002.

Major in Luanda has been in nearly all aspects of society. Major road rehabilitation, including road widening, application of asphalt, and re-routing efforts are all currently being done throughout Luanda. The Brazilian construction firm Odebrechet, are currently constructing two six-lane highways. One highway that will provide speedy access to , , , and the district of Luanda to the new airport of Luanda. [http://www.otal.com/angola/] The other will connect the of Luanda to , and is expected to be completed by the end of 2008. [http://www.otal.com/angola/]

Major is also being constructed, for house those who currently reside in slums, which dominate the landscape of Luanda. A large Chinese firm has been given a contract to construct the majority of replacement housing in Luanda. [http://www.chinainternationalfund.com/projects1.asp?Id=287] The Angolan minister of health recently stated poverty in Angola will be overcome by an increase in jobs, and the housing of every citizen. [http://www.portalangop.co.ao/motix/pt_pt/noticias/economia/Pobreza-sera-combatida-com-emprego-habitacoes-sociais-diz-ministro-adjunto,d4542ae2-820b-4c6b-bdee-85dc280983b5.html]

*, lead singer of the band Tantric, was born and lived very briefly in Luanda