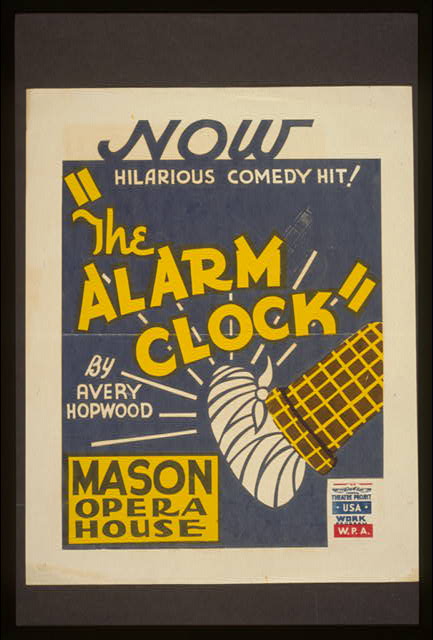 thumb|130px|right| Poster of "The Alarm Clock" by Avery Hopwood] Avery Hopwood (, - , ), who was born in Cleveland and graduated from the , was one of the most successful playwrights of the Jazz Age, having four plays running simultaneously on Broadway in 1920.

Hopwood started out as a journalist for a Cleveland newspaper as its New York correspondent, but within a year had a play, "Clothes," produced on Broadway. He became known as "The Playboy Playwright"

Sadly, personal troubles related to his and his inability to break from the formula writing that made him a success led to his early death in 1928 at age 46 when he suffered a heart attack while swimming at , . Throughout his life, Hopwood worked on a novel that he hoped would "expose" the strictures the commercial theater machine imposed on playwrights, but the manuscript was never published.

The terms of Hopwood's will left a substantial portion of his estate to his alma mater, the for the establishment of the Avery Hopwood and Jule [his mother] Hopwood Creative Writing Awards. The bequest stipulated: "It is especially desired that students competing for prizes shall be allowed the widest possible latitude, and that the new, the unusual, and the radical shall be especially encouraged." Famous Hopwood award winners include , , , , , , , , and .