The Ontario Regiment (RCAC) is a Primary Reserve armoured reconnaissance regiment of the Canadian Forces Land Force Command. The unit is based in downtown Oshawa, Ontario. Formed in 1866, and more commonly known as the 'Ontarios', 'black cats' or 'ONT R' (pronounced "ON-tar"), the regiment ranks among the oldest continuously serving Reserve (Militia) regiments in Canada and is one of the senior armoured regiments in the Royal Canadian Armoured Corps.

Militia units have existed in what is now the Region of Durham since the earliest days of the century. In 1856, a company was raised by Capt James Wallace, in Whitby, Ontario, and became Number 6 Coy of the 2nd Battalion, Volunteer Militia Rifles of Canada, later named "The Queen's Own Rifles of Toronto" in April 1860. During the period of national tension that gripped Canada in the early 1860s, other volunteer militia infantry companies were formed in Ontario County. In 1862, two formed in Oshawa, two in Whitby and one each in Prince Albert, Greenwood, Uxbridge, Columbus and Brooklin. Many men were mobilized for service during the anxieties of 1864-66, when Fenian invaders massed south of the Niagara Frontier. The Oshawa Rifle Company took part in the Battle of Ridgeway, in June 1866, as part of a Provisional Battalion of Ontario Infantry.

The Ontario Regiment was officially formed from the nine independent rifle companies on September 14, 1866. It was named the 34th (Ontario) Battalion of Infantry. In later years, men of the regiment served in the Northwest Rebellion of 1885 when they were attached to The Queen's Own Rifles and the 10th Royal Grenadiers (now the Royal Regiment of Canada). During the South African War or Boer War, members of the 34th (Ontario) Battalion were attached to the 1st (Special Service) Battalion of The Royal Canadian Regiment as well as The Royal Canadian Dragoons.

In September 1915, the Second-in-Command (2IC) of the 34th (Ontario) Battalion, Major Sam Sharpe was authored to raise the 116th Battalion CEF from Ontario County. This battalion fought with great distinction in France and Belgium. Another battalion, the 182nd was also raised from the county, but it did not serve in action as a formed unit as it was broken up after its arrival in England. Most of the battalion's men were sent to the continent to reinforcement several other Canadian battalions.

In 1936, the unit was re-roled as a tank battalion and became one of the first units to comprise General F. F. Worthington's newly-minted Royal Canadian Armoured Corps in 1936. The unit trained in Oshawa, throughout Ontario County and at the Armoured School at Camp Borden.

The unit was mobilized for World War II on September 4, 1939. Within six days 594 men had enlisted for active service. In June 1941, the regiment sailed from Halifax on the "Pasteur", arriving in Greenock, Scotland on the 1st of July, and headed south to Headley Downs, England. The Ontarios were the first Canadians to be issued the Churchill tank with which it trained in exercises in its experimental period of 1941-42. On 21 December 1941 the regiment moved to Brighton, alternating between here and Shermanbury park in operational roles in the defence of the English coast. The unit fought with distinction in several theatres during the war, beginning with the Allied invasion of Sicily in July 1943, through the Italian Campaign (World War II) seeing action in the fierce Liri Valley, Monte Cassino, and on to Ortona. In 1945, the unit entered the Northwest European theatre where it fought with distinction in the Dutch Campaign winning honours at Arnhem.

Upon demobilization, The Ontarios continued as a reserve armoured regiment using Mark IV Sherman Tanks. In fact, the Regiment was one of the last Canadian militia units to give up their Shermans in 1972. Some of these actual tanks can be seen as monuments or gate guards at [CFB Kingston] and the former Denison Armoury on Dufferin Street in Toronto.

With the retirement of the Cougar in the 2004, the Regiment was again re-designated an armoured reconnaissance unit, briefly employing and conducting trials on all terrain vehicles. Today, the Regiment continues its reconnaissance tasking and has adopted the Mercedes-built LUVW G-Wagon.

A significant number of the Regiment's soldiers have volunteered for active duty with NATO in Germany, United Nations missions in Cyprus, Bosnia, the Golan Heights, Cambodia, the former Yugoslavia and, most recently, the NATO-led engagement in Afghanistan.

A regimental "challenge" coin was issued in late 2009 LCol R Brown and CWO DJ Munroe to the members and officers serving, as a remembrance of those Ontarios who have fallen in the line of duty. The coin, is produced in pewter colour and shows the regimental cap badge on the front side, and the Royal Canadian Armoured Corps Cap badge on the reverse, along with a serial number. A year later, the unit's CO and RSM perceived some gaps in the official honours and awards process, particularly at the unit level. As such, in November 2010 a Command Team Coin of Excellence was first presented. The coin is gold in colour and shows the regimental cap badge in full autumnal colour, ringed with the words 'For Excellence'. The reverse in gold shows the ranks of the CO and RSM, along with the camp flag of the Royal Canadian Armoured Corps.

A complete historical list of the unit's key appointments is mainatined at the Regimental Museum's official website. 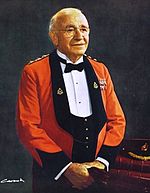 Since 1866, the 34th Battalion and its successor units including the 116th Battalion, 182nd Battalion, and the Ontarios, maintained an award-winning brass marching band. The Regimental band earned top national honours in 1948 at the Canadian National Exhibition in Toronto. The band's patron, Colonel Robert Samuel McLaughlin (Colonel Sam), funded the purchase of the band's instruments and uniforms for several decades, having gone so far as to build a bandshell at Oshawa's Memorial Park to provide the bandsmen with their own venue to entertain Oshawa's citizens.

The Regiment maintained its band until 1968 when, due to a painful reorganization of the Canadian Forces, the unit's band establishment was eliminated by the federal Liberal government of the day. Lt (N) Bill Askew, a naval veteran of World War II and officer with the 1913 Ontario Regiment Cadet Corps refused to let the band wither. Under his leadership, the band was transformed into the present-day Oshawa Civic Band. Many of the former regimental bandsmen continue to play with the Civic Band today. The Civic Band regularly performs in a summer concert series at Oshawa's Memorial Park and, from to time, at military functions including the Regimental Ball (held each May) and the Regiment's annual Parkwood Promenade.

For almost forty years, the band of the 1913 Ontario Regiment Cadet Corps has provided the Regiment with much of its marching music at public events and official regimental functions.

Several exchange visits have taken place over the years. In 1969, officers and men of the Ontarios performed 'groundskeeping' duties on the occasion of the Welsh’s amalgamation parade at Cardiff Castle. In September 1983, a small group of Welsh officers and soldiers were on parade in Oshawa on the occasion of the Ontarios’ change of command. In July 1989, the Ontarios sent a 35-man guard to Wales for the RRW’s Tercentenary parade at Cardiff Castle. HRH Charles, Prince of Wales the longtime Colonel-in-Chief of the Welsh, inspected the Regiment. The Welsh reciprocated in 1991 by providing a guard for a parade at Iroquois Park in Whitby, Ontario to mark the Ontarios’ 125th anniversary. More recently, in September 2004, the Welsh band toured many of its War of 1812 battlefields near Niagara and encampments throughout Ontario including Kingston, Ontario. The band also visited Oshawa to perform at the Ontarios’ annual Parkwood Promenade, held at the home of Colonel R.S. McLaughlin, the unit's former patron and long-serving Honorary Colonel.

A complete historical list of the unit's key appointments is available online at the Regimental Museum's official website. 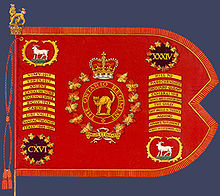 Those battle honours approved for emblazonment on the Guidon are in bold.

Gules on a bar a cat statant guardant irate Or, the whole within an annulus Gules fimbriated and inscribed with the motto FIDELIS ET PARATUS in letters Or and surmounted at the base by a bezant fimbriated and charged with a fillet saltire Sable the base quarter removed, and beneath the annulus a scroll Or with the words ONTARIO REGIMENT inscribed in letters Sable, and above, encircling the annulus, a wreath of nine maple leaves autumnally coloured, the centre one in chief ensigned by the Royal Crown proper.

The badge is based, in part, on the cat from the Clan MacGillivray familial crest, a member of which commanded the regiment in the early 1900s. After World War I, the cat was designed into a fierce or fighting pose echoing the experience of the regiment's members in the war. The maple leaves, nine in total, reflect the nine provinces (prior to Newfoundland joining Confederation) that contributed soldiers to the First World War battalions which the regiment perpetuates. Post World War I regulations which forbade the use of the units traditional numerals '34' posed an identification problem for the Regiment. This problem was solved by placing a circle at the base of the scroll and dividing it into four quadrants, one of which has been cleared, giving the idea of three from four or 34. "ONTARIO REGIMENT" is a form of the regimental title and "FIDELIS ET PARATUS", Latin for "Faithful & Prepared" is the motto of the regiment. (Source: [1]).

The present-day badge is topped with the crown of Canada's sovereign, currently the crown adopted by HM Queen Elizabeth II in 1953. The pre-Elizabeth II badge bore the "King's" crown as seen above. Once they have completed their secondary trade qualification, currently Armoured Reconnaissance, every member of the Regiment, regardless of rank, wears the same brass cap badge. Several attempts to introduce a wire or cloth officer cap badge in the 1960s and 1980s failed. The complete evolution of the cap badge is explained here.

In April 1852, the Regiment of Ontario, consisting of 9 Battalions, was formed in the Sedentary Militia upon the creation of the new Ontario County from part of the former York County. In April 1860, the Whitby Highland Rifle Company was one of several Toronto-area units that amalgamated to form the 2nd Battalion, Volunteer Militia Rifles. This unit split off again in 1862 to become part Ontario County's growing militia garrison which eventually consisted of nine independent rifle or infantry companies authorized on these dates:

On 14 September 1866, these nine independent companies based in seven towns across Ontario County (now Durham Region) were drawn together to form the 34th Ontario Battalion of Infantry. The unit underwent several redesignations after the nineteenth century and during the World War I:

The unit was converted from infantry to armour (tank) and redesignated:

The Ontario Regiment (RCAC) houses three messes at the Col. R.S. McLaughlin Armoury. The Junior Ranks Mess (JRs Mess) is located on the main floor, The Sergeants' Mess (Sgts' Mess) and The Officers' Mess are located on the upper floor at opposite ends of the building.
The Colonel R. S. McLaughlin Armoury is a recognized Federal Heritage building 1991 on the Register of the Government of Canada Heritage Buildings. [1]