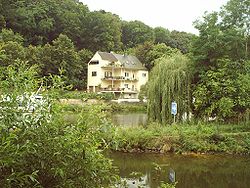 The river Lahn in Limburg 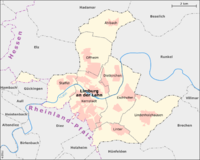 Map of Limburg and its constituent communities 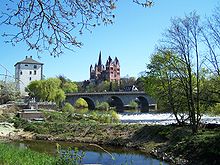 Cathedral with the old Lahn bridge

Limburg an der Lahn (officially: Limburg a. d. Lahn) is the district seat of Limburg-Weilburg in Hesse, Germany.

Limburg lies in western Hesse between the Taunus and the Westerwald on the river Lahn.

The town lies roughly centrally in a basin within the Rhenish Slate Mountains which is surrounded by the low ranges of the Taunus and Westerwald and called the Limburg Basin (Limburger Becken). Owing to the favourable soil and climate, the Limburg Basin stands as one of Hesse’s richest agricultural regions and moreover, with its convenient Lahn crossing, it has been of great importance to transport since the Middle Ages. Within the basin, the Lahn’s otherwise rather narrow lower valley broadens out noticeably, making Limburg’s mean elevation only 117 m above sea level.

Limburg forms together with the town of Diez a middle centre (in terms of Central place theory) but with partial functions of an upper centre in western Middle Hesse.

The nearest major cities are Wetzlar and Gießen to the northeast, Wiesbaden and Frankfurt to the south and Koblenz to the west.

Likewise often called a constituent community is Blumenrod, although this is actually only a big residential neighbourhood in the main town’s south end. Its landmark is the Domäne Blumenrod, a former manor house that has been restored and remodelled by the Limburg Free Evangelical community.

Limburg’s biggest outlying centre is Lindenholzhausen (3,329 residents as of June 2006); the second biggest is Linter.

The derivation of the name “Limburg” is not quite clear and may well hearken back to a castle built here (Burg means “castle” in German). In 910 the town was first mentioned as Lintpurc. Two of the popular theories are: 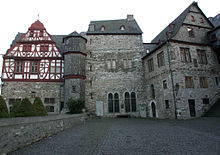 The oldest preserved section of the Limburger Schloss, seen from the courtyard

About 800, the first castle buildings arose on the Limburg crags. This was probably designed for the protection of a ford over the river Lahn. In the decades that followed, the town developed under the castle’s protection. Limburg is first mentioned in documents in 910 under the name of Lintpurc when Louis the Child granted Konrad Kurzbold an estate in the community on which he was to build a church. Konrad Kurzbold laid the foundation stone for Saint George’s Monastery Church, where he was also buried. The community soon increased in importance with the monastery’s founding and profited from the lively goods trade on the Via Publica.

In 1150, a wooden bridge was built across the Lahn. The long-distance road from Cologne to Frankfurt am Main subsequently ran through Limburg. In the early 13th century, Limburg Castle was built in its current form. Shortly afterwards, the town passed into the ownership of the Lords of Ysenburg. In 1214, the community was granted town rights. Remains of the fortification wall from the years 1130, 1230 and 1340 with a maxiumum length of roughly one thousand metres indicate to this day the blossoming town’s quick development in the Middle Ages. There is proof of a mint in Limburg in 1180. 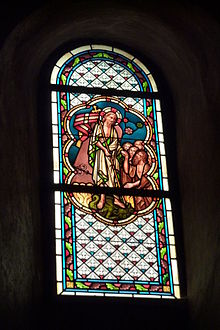 Mediaeval window at the back of the cathedral (peristyle)

One line of the Lords of Ysenburg resided from 1258 to 1406 at Limburg Castle and took their name from their seat, Limburg. From this line came the House of Limburg-Stirum and also Imagina of Isenburg-Limburg, German King Adolf’s wife.

The ruling class among the mediaeval townsfolk were rich merchant families whose houses stood right near the castle tower and were surrounded by the first town wall once it was built. The area of today’s Rossmarkt (“Horse Market”), in which many simple craftsmen lived, was only brought within the fortifications once the second town wall was built. The inhabitants there, however, unlike the merchant élite, were accorded no entitlement to a voice in town affairs and were not allowed to send representatives to the town council. Nevertheless, they had to bear the main financial burden of running the town. Only in 1458 were they allowed to send two representatives to town council.

Remains of the town wall on Eschhöfer Weg

Saint George’s Cathedral (Sankt-Georgs-Dom) built on the old monastery church’s site, and also called Georgsdom, was consecrated in 1235. On 14 May 1289, a devastating fire wiped out great parts of the inner town, although these were subsequently rebuilt. One of the houses built at that time was the Römer 2-4-6, which is today one of Germany’s oldest half-timbered houses. In 1337, Limburg’s Jews were expelled from the town. Only in 1341 were they once again able to settle in the town, by royal decree. In 1344 a half share of the town was pledged to the Electorate of Trier, and in 1420, the town passed wholly into the ownership of Trier. This event, along with another town fire in 1342, the Black Death in 1349, 1356 and 1365, but above all the rise of the Territorial Princes, led to a gradual decline. In 1315 and 1346, the old stone Lahn Bridge was built (presumably in two sections).

Limburg – extract from the Topographia Hassiae by Matthäus Merian 1655 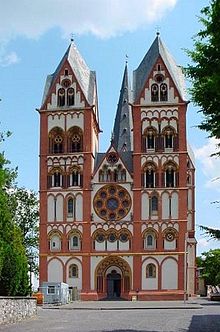 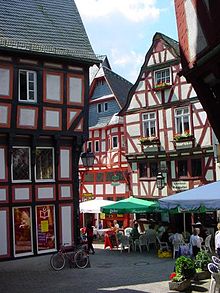 Against the background of the German Peasants' War, unrest also arose among the townsfolk in 1525. After the Elector of Trier had demanded that the townsmen turn a Lutheran preacher out of the town, a board made up of townsmen who were ineligible for council functions handed the council a 30-point comprehensive list of demands on 24 May. It dealt mainly with financial participation and equality in taxation, trade and building issues with the merchant class. In the days that followed, these demands were reduced in negotiations between the council and the board to 16 points, which were likely also taken up with the Elector afterwards. On 5 August, however, Archbishop Richard ordered the council to overturn all concessions to the townsmen. Furthermore, a ban on assembly was decreed, and the ineligible townsmen were stripped of their right to send two representatives to council.

In 1806, Limburg came into the possession of the newly founded Duchy of Nassau. In 1818 the town wall was torn down. In 1827 the town was raised to a Catholic episcopal seat. In 1866 the Duchy and with it Limburg passed to Prussia in the wake of the Austro-Prussian War. As of 1862, Limburg became a railway hub and from 1886 a district seat. In 1892, the Pallottines settled in town, but only the men; the women came in 1895.

From 1919 to 1923, Limburg was the “capital” of a short-lived state called Free State Bottleneck (or Freistaat Flaschenhals in German) because it was the nearest unoccupied town to the Weimar Republic.

During World War I there was a major prisoner of war camp at Limburg an der Lahn. Many Irish members of the British Army were interned there until the end of the war and at one stage they were visited by the Irish republican leader Roger Casement in an attempt to win recruits for the forthcoming Irish rebellion.

The municipal election held on 26 March 2006 yielded the following results:

In 1956, a Patenschaft – roughly, a sponsorship – was undertaken for Sudeten Germans driven out of the town of Mährisch Neustadt in the Sternberg district. 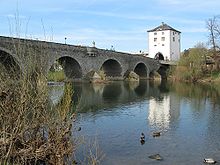 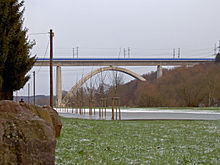 Lahn Valley Bridge on the A3, in the background the ICE bridge, in the foreground at left part of the campground

Limburg is a traditional transport hub. Already in the Middle Ages, the Via Publica crossed the navigable Lahn here. Today the A 3 (Emmerich–Oberhausen–Cologne–Frankfurt–Nuremberg–Passau) and Bundesstraße 8, which both follow the Via Publica’s alignment as closely as possible, run through the town. Bundesstraße 49 links Limburg to Koblenz towards the west and Wetzlar and Gießen towards the east. The section between Limburg and Wetzlar is currently being widened to four lanes. This section as far as Obertiefenbach is also known as Die lange Meil (“The Long Mile”). Bundesstraße 54 links Limburg on the one hand with Siegen to the north and on the other by way of Diez with Wiesbaden, which may likewise be reached over Bundesstraße 417 (Hühnerstraße).

As early as 1248, a wooden bridge spanned the Lahn, but was replaced after the flooding in 1306 by a stone bridge, the Alte Lahnbrücke. Other road bridges are the Lahntalbrücke Limburg (1964) on the A 3, the Lahnbrücke near Staffel and the Neue Lahnbrücke from 1968, over which run the Bundesstraßen before they cross under the inner town through the Schiedetunnel, a bypass tunnel.

Once the Lahntalbahn had been built, Limburg was joined to the railway network in 1862. Limburg railway station developed into a transport hub. Other railway lines are the Unterwesterwaldbahn, the Oberwesterwaldbahn and the Main-Lahn Railway. At Niedernhausen station on the Main-Lahn Railway, transfer to the Ländchesbahn to Wiesbaden is possible. With the exception of the upper section of the Lahntalbahn and express lines to Koblenz and Frankfurt, which are still served by Deutsche Bahn, all railway lines are run by Vectus Verkehrsgesellschaft mbH, based in Limburg.

Once the InterCityExpress Cologne-Frankfurt high-speed rail line had been built, Limburg acquired an ICE station. It is the only railway station in Germany at which exclusively ICE trains stop. The high-speed rail line crosses the Lahn over the Lahntalbrücke and then dives into the Limburger Tunnel.

The nearest airport is Frankfurt Airport, 63 km away on the A 3. Travel time there on the ICE is roughly 20 minutes. Cologne Bonn Airport is 110 km away and can be reached on the ICE in 44 minutes.

The Lahn between Lahnstein and Wetzlar is a Bundeswasserstraße (“Federal waterway”). Since the Lahntalbahn’s expansion, however, the waterway’s importance has been declining. It is used mainly by tourists with small motorboats, canoes and rowboats. Limburg is the landing site of the tourboat Wappen von Limburg. 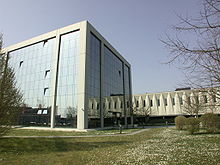 Limburg has four schools which lead to, among other qualifications, the Abitur:

The hospital perched on the Schafsberg overlooking the town has at its disposal 433 beds and 15 specialist departments.

In Limburg there are various sport clubs; some are even represented in Bundesligen, and even at the world level.

The Evangelical Church offers with its Jugendfreizeitstätte Limburg (JFS for short, meaning “Youth Leisure Place”) a meeting place for youth with many events. With table football, Internet café and many events, this institution is not only church-based, with two staff and a Zivildienstleistender supporting the visitors not only with their problems.

The Mütterzentrum Limburg is a family meeting place for those with or without children on Hospitalstraße. The club is supported by the town of Limburg and the Bundesland of Hesse and offers among other things a parents’ service that looks after children, a broad array of course offerings for children and adults, a miniature kindergarten and a café.

The cabaret troupe “Thing”, founded more than 25 years ago, moved after a short time from its initial home in the outlying centre of Staffel to the Josef-Kohlmaier-Halle, a civic event hall, where its stage can now be found in the hall’s club rooms. The troupe is run by an independent acting club. On the programme are chanson, cabaret, literature and jazz as well as folk, rock and performances by singer-songwriters. It makes a point of furthering young artists. Each month, three or four events are staged.

The dedication of “Thing” was recognized on 6 December 2003 when the Kulturpreis Mittelhessen (“Middle Hesse Culture Prize”) was awarded to it.

Limburg Cathedral has a famous boys’ choir, the Limburger Domsingknaben, although they are actually based at the “Musical Boarding School” in Hadamar just outside Limburg. 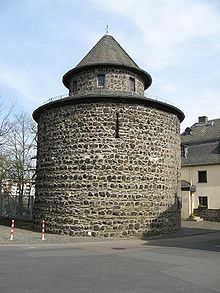 The Katzenturm, formerly part of the town wall, today a navy museum 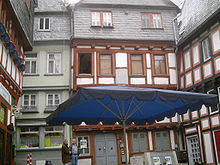 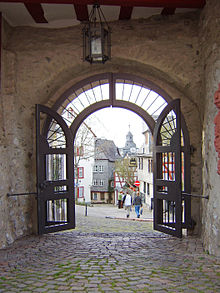 View through a gate near the Limburg cathedral treasury

In Limburg there are several museums. The most important are:

Only a few towns, like Limburg, have been able to keep a full set of nearly unscathed mediaeval buildings. The formerly walled town core between St. George’s Cathedral, Grabenstraße (a street marking the old town moat) and the 600-year-old Lahn Bridge thus stands today as a whole under monumental protection.

The Altstadt (“Old Town”) boasts a fine cathedral and is full of narrow streets with timber-frame houses, dating mainly from the 17th and 18th centuries. That's why it is located on the German Framework Road.