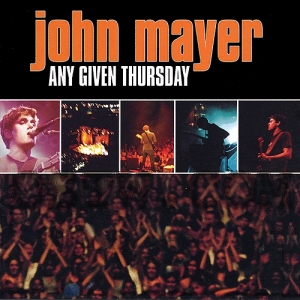 
"Any Given Thursday" is a live CD/ by John Mayer, recorded in Birmingham, at the on , , during the "" tour. The album quickly peaked at #17 on the Billboard 200 chart. It features mostly songs from "".

Though mostly featuring songs from "Room For Squares". The album also features "Man On The Side" (co-written with Cook) and "Covered in Rain", neither of which had ever been released on a studio recording. "Covered in Rain", according to a documentary included in the DVD release, is "part two" of the song "City Love", which features the line, "covered in rain." The concert features songs previously not heard, such as "", which appeared on "", his following album, and () is the only song to have appeared on every live release. It also features "Comfortable" from his original , "".

The DVD contained several features in addition to the conert: an audio commentary of the concert by Mayer and his friend Scotty Crowe (whose blog is hosted on Mayer's site since 2006update after|2009|0|0), a photo gallery from the tour (not exclusively the concert shown in the video itself), and a documentary of an interview with Mayer entitled, "The Morning After", in which Mayer talks about his influences, some meanings of songs, and just general information about Mayer. The video was taken the Friday morning after the concert.Fact|date=February 2008

The CD/DVD received conservative, although consistent, praise, with critics torn between his pop-idol image, and (at the time) emerging guitar prowess. Erik Crawford (of ) asked "Is he the consummate guitar hero exemplified when he plays a cover of Stevie Ray Vaughan's 'Lenny', or is he the teen idol that the pubescent girls shriek for after he plays 'Your Body Is a Wonderland?'" [Crawford, Erik (2003). [http://www.allmusic.com/cg/amg.dll?p=amg&sql=10:0pfexqtaldse "Review"] AllMusic.com. Retrieved on , .] [Medsker, David (2003). [http://www.popmatters.com/music/reviews/m/mayerjohn-any.shtml "Love me, love me, say that you love me..."] Pop Matters. Retrieved on , .] Billboard called the DVD "a great introduction to a rising star." [J.K.; Taylor, Chuck (, ), "Any Given Thursday (Film)". "Billboard". 115 (10):36]

All songs written by unless noted otherwise.

Differences between the DVD and CD releases

*The song "" (originally by experimental musical artist ) does not appear on the CD release due to copyright troubles; however, it does appear on the DVD.
*Between many songs, the CD contains some brief comments by Mayer. On the DVD, these comments tend to be longer, including a few long monologues referred to by Mayer himself as "John's Story Time" (on the DVD commentary).
*Extended introductory explanations to songs (such as "City Love").

*On the concert, Mayer pre-empts playing "" by telling the audience that he wrote the song there, in Birmingham.