Scream (comics)
This article is about a character from the Marvel Spider-Man universe. For the British horror comics series, see Scream!. For the Redeemers character, see Angar the Screamer. For the horror film, see Scream (film). For other uses, see Scream.

Scream (Donna Diego) is a fictional supervillainess from the Spider-Man comic book series. She is one of six symbiote spawns of Venom.

Scream was one of the five Life Foundation Symbiotes that were forcefully spawned from the Venom symbiote. She was their unofficial leader. Like the other four hosts, she was a volunteer for the Life Foundation; a survivalist group within the American government (an organization that was preparing for the M.A.D. (Mutually Assured Destruction) fallout of the Cold War and provide a comfortable life for their wealthy clients after the impending nuclear holocaust). The Life Foundation was experimenting with the Venom symbiote in the hopes of creating so-called 'super-cops' to watch over their imagined fallout shelter utopia. Donna was picked from the organization's security force, made up of police, soldiers, and mercenaries.

In Scream's first appearance, she ran into Spider-Man while terrorizing a shopping mall near Salinas, California. Quickly bested by the more experienced fighter, Scream escaped in a hovercraft which returned to the Life Foundation's base.

Unknown to her, Spider-Man had hitched a ride on that same hovercraft. Once inside he helped Eddie Brock (who was being held prisoner there) escape and bond with his symbiote. Scream and the other guardian symbiotes then tangled with Spider-Man and Venom, but Venom turned an accelerated aging device on them. The age-accelerating machine appeared to make Scream and the other symbiotes age to dust. Venom and Spider-Man escaped and the Life Foundation blew up the base.

Later it was revealed that Scream and her "siblings" survived, and the Life Foundation was able to save them and their symbiotes. However, for some reason, the Guardians had a falling out with their previous employers and now were fugitives on the run, struggling to remain in control of their symbiotes. Scream led the others to New York City in search of Venom, hoping that he would help teach them how to control their symbiotes. Venom wanted nothing to do with them, and battled Scream. Venom disappeared, and Scream attempted to enlist the Scarlet Spider to help find him. When he refused, Scream experienced a psychotic break and began a rampage in Times Square. Humiliated by Venom (who ripped pieces of her symbiote off her) and narrowly saved by the Scarlet Spider, Scream disappeared again.

Undiscouraged, Scream rounded up her "siblings" and broke the now-powerless Eddie Brock out of prison, kidnapping him and imprisoning him in a Chicago warehouse. She once again asked for his help in learning to communicate with the symbiotes. Eddie once again refused and tried to kill them all, even though he had no symbiote to back him up. Eddie escaped, and soon after the Life Foundation symbiotes were murdered, one by one. Scream led them to believe that Eddie Brock was the killer, while in fact, it had been her the entire time. She had come to the conclusion that all symbiotes are evil, and, "We're evil for bonding with them so we all have to die."

It was revealed that she was insane and had been hearing voices long before she became host to her "other" (suggesting that she was schizophrenic). Eddie managed to bond with the Venom symbiote before Scream killed him. While he could not prevent her from murdering every other symbiote, Venom was nevertheless able to beat her in combat yet again, and Scream was taken in by the authorities.

Since the symbiote invasion of Earth in the Planet of the Symbiotes storyline, Donna is one of the few remaining symbiotes on earth and busied herself tracking down and helping benevolent symbiotic survivors. This is a significant change in character; Donna seeks to redeem herself for her past murders. After many of the symbiotes (and their human hosts) were murdered, Donna tracked Xenophage, a huge alien that devours both symbiotes and the brains of their hosts. Donna assists Venom in slaying the beast, but was gravely injured.

Later she sought out the Xenophage's hidden ship to help her track down more of the symbiotic survivors. The ship transported her and others (including Venom and Wolverine) into another dimension where Scream was nearly killed once again by the villainous mutants Dirtnap and Chimera. Upon her successful return to Earth, she disappears, presumably to continue her search for the few remaining symbiotes.

Donna appears in two panels of the Marvel Super Hero Island Adventures comic giveaway from 1999, as she is shown to be a member of the Sinister Syndicate. There she is referred to as Scream in the comics for the first time.

Donna's family name - Diego - was first established in "Civil War - Battle Damage Report"[1] in 2007, many years after her first appearance as a character in the Marvel Universe. In these files she is quoted as being an "enemy combatant" to the forces of the Initiative.

Scream's superhuman abilities stem from her alien symbiote. The creature can mimic clothing and camouflage Donna. She often uses her 'hair' as a weapon, to wrap or tangle enemies, much like Medusa of the Inhumans. Like Spider-Man and Venom, Scream has wall-crawling and web-slinging abilities, and also boasts an early-warning sense. Scream also possesses some degree of superhuman strength, the exact limits of which are unknown. 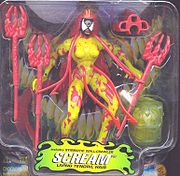 Scream can be seen in the Islands of Adventure ride The Amazing Adventures of Spider-Man as a member of the Sinister Syndicate. During the ride, she attacks guests with her claws, but is knocked out by Doctor Octopus, attempting to claim the guests for himself. Later, she and Hobgoblin attack Spider-Man while the vehicles are in the air, and is seen being kicked away by Spider-Man. She appears during the final scene, webbed up with the rest of the Syndicate voiced by Candi Milo.

Scream has her own action figure in the "Venom - Planet of the Symbiotes" 1996 action figure series by Toy Biz. It has a "living tendrils hair" feature. Along with Lasher, her name was christened by the toy line, however she was not officially called that by Marvel until 2007 when she was titled with the alias in Civil War: Battle Damage Report handbook.

Scream is one of the six symbiote bosses (the only one of that group to appear on the cover besides Carnage) in the video game, Spider-Man and Venom: Separation Anxiety. She also appears as a boss in Spider-Man: The Animated Series (video game), despite not appearing in the show. She is the only female villain featured in the game aside from Hypnotia. She is voiced by Grey DeLisle.