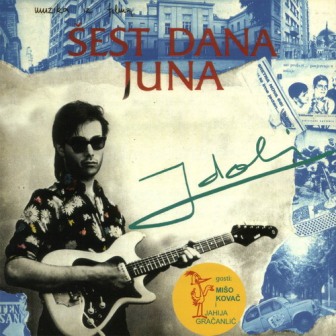 Šest dana juna is the soundtrack album for the movie with the same title. It was the last release.

After the show decided to split up. In the meantime asked to work with on the soundtrack album for Dinko Tucaković moive "Šest dana juna". Divljan agree to write the music and record it but separately form other members who would record their parts.

The album was released in and credited as an album. The musicians involved with the project were members (vocals), (drums), both bassists and and guests Piko Stančić and Boban Đorđević did the drums, keyboardists Đorđe Petrović and Dragan Ilić, guitarist Dragomir Mihajlović Gagi and saxophonist Vuk Vujačić. The script included one chanson and one folk musician, so and Jahija Gračanlić (also know as the Cosmic Bosnian) appeared on the album and in the movie with the tracks "Da je duži moj dan" and "Ja je zovem meni da se vrati". The rest of the tracks were songs except "Samo me gledaj i budi tu" which is a cover of 's hit.

Since the story of the movie is happening in the sixties, the band recorded tracks at various locations to get the music similar to the sixties sound. Insturmental tracks on the album are a short acoustic intro "Mala tema filma", "Tema groblja" which is done in a ghotic vocal manner and "Tema fabrike" which is the instrumental verison of the "Čokolada" track "Udri bogataša", "Ljubavna tema" and "Bluz". The most notable tracks are "" and "" released on single given as a present with the copy of "Džuboks" magazine.

The album was not a commercial success as the fans were expecting a new release which did not appear as the band did not exist any more.

All tracks written by .