Architecture of Bosnia and Herzegovina

Architecture of Bosnia and Herzegovina

The architecture of Bosnia and Herzegovina is largely influenced by four major periods where political and social changes determined the creation of distinct cultural and architectural habits of the region. 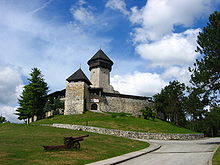 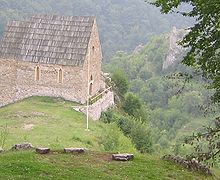 Bobovac, seat of the rulers of Bosnia.

The medieval period in Bosnia lasted until the invasion of Ottoman Empire. The social organization of Bosnia of that time developed into a system known as Zadruga. In Zadruga, the community was organized such that a few families with common interests would live closely together in housing clusters. The leaders of the community were selected according to their age and high ethical standards. The Zadruga system was primarily found a rural, agrarian communities, greatly dependent on natural resources. As the community grew, segments of families would collectively move to another area forming a new cluster or a village. The continuing links between these related clusters stimulated both trade and economy. Individual families lived together in houses known as Dinaric houses. These were simple structures build of natural materials (usually timber and wickerwork). Interior space was organized around the hearth in a central room with separate private quarters for men and women.

Even though military fortresses in Bosnia and Herzegovina date from Roman times, most of them were built between the 12th and 15th century. The structures were built out of ruff cut stone on hills overlooking a river, route or town. Today there are around 300 of them but most of them are in ruins. The most beautiful and well preserved are: Srebrenik, Doboj, Vranduk, Bobovac, Blagaj, Ljubuški, Sokolac, Dobor, Ključ, Jajce, Bihać, Tešanj, Počitelj, Stolac, Maglaj, Gradačac, Višegrad, Travnik etc. The court in Kraljeva Sutjeska was even richly engraved in Gothic style. An example of medieval Gothic and Romanesque tower is the Tower of St. Luke located in Jajce and created in the 15th century. 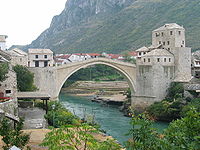 Stari most in Mostar 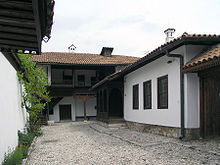 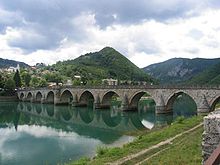 Bridge on the Drina river in Višegrad.

In the late 15th century, the Ottoman Empire came to the Balkans. They addressed the need to develop urban areas and cities, from this emergerged the basic form and organization of urban areas which are still distinctive today. Dušan Grabrijan, an architectural theoretician, defined the primary organization of typical Bosnian cities. He recognized that cities had five authentic components defined by a set of "unwritten laws": surrounding hills defined the form of the city, the main road is the spine, “Čarsija” is the heart, vegetation are lungs, river is the spirit. Juraj Neidhard another theoretician described a typical Bosnian city in one of his books as following:

The fact that people used river as a main element of urban life led to construction of Stari most in 1566 in Mostar in Herzegovina. At the time it was built it was the longest single span arch stone bridge in the world. Its meaning had however rather more profound power. It symbolized the connection between eastern and western civilization. In addition to urban planning, architecture of Bosnia has emerged with a bit clearer architectural vocabulary. Architecture however was organized around a set of unwritten architectural laws including: human scale, unobstructed views, geometry, open and flexible spaces, simple furniture, spatial links to nature and use of local materials and traditional building techniques. In addition design philosophy favored heterogeneity of materials. In other words each material had a particular intrinsic function given to it by social perception of the people involved in the architectural process. Juraj Neidhard described this perception as following:”

Hence foundations were built out of stone, ground floor out of clay, unburnt brick and wooden ties, first floor out of wooden frame and roof almost always out of wood. Organizationally, a typical Bosnian residence from the 17th century consisted of five main elements: a fence that faced and defined the street and clearly differentiated private from public, a courtyard usually built of pebble or flat stone pattern for easier maintenance, an outdoor fountain (Šadrvan) for hygenic purposes, a lower level "semi-public" private space called the Hajat where the family would gather, and the Divanhan, an upper-level semi-private/private space used for relaxation and enjoyment. 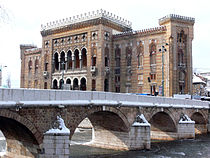 National and University Library of Bosnia and Herzegovina in Sarajevo

In 1878 Bosnia was up for another cultural diversification as Austro-Hungarian Empire annexed the country. In the short time that Austrian Empire ruled Bosnia they had an immense influence in future urban planning and architecture. Some of the changes introduced by Austrian influence included introduction of new building code regulations such as, required building permits, life safety and fire protection requirements, regulated wall thickness and building heights. Some changes in urban planning involved classification of street types and consequent building regulations, requirement for harmonious design with immediate surroundings and compliance with overall regulation plan. There were also changes in a general design philosophy. Stylistically, Bosnia was to be assimilated into the European mainstream, save for the appearance of the Orientalist style (also "Pseudo-Moorish style").

This style drew its inspiration from the Moorish architecture of Spain as well as Mamluk architecture of Egypt and Syria. This included application of ornamentations and other "Moorish" design strategies neither of which had much to do with prior architectural direction of indigenous Bosnian architecture. The new architectural languages added to diversity of already complex urban composition in Bosnian cities. These and other changes caused certain other consequences in Bosnia. For example building life safety was improved however local building contractors and architects become obsolete due to new regulations and construction methods. This caused immigration of skilled labor from Central Europe that further doubled and diversified the population of Bosnia and Herzegovina which in the turn stimulated the economy.

Finally, cities began changing their character. The majority of projects during the time of Austrian influence dealt with administrative building designs. The post office in Sarajevo for example follows distinct formal characteristics of design like clarity of form, symmetry, and proportion while the interior followed the same doctrine. The National and University Library of Bosnia and Herzegovina in Sarajevo is an example of Orientalist architectural language using Moorish-Mamluk decoration and pointed arches while still integrating other formal elements into the design.

At the end of World War II Bosnia and Herzegovina become a republic in the Socialist Federal Republic of Yugoslavia. Political currents in Yugoslavia favored industrialization that required an emphasis on development of public housing to serve migration of population from rural to urban areas. To overcome cultural conflicts anti-historicism with modern architectural vocabulary became a prevalent design strategy for the majority of architectural projects. Hence homogeneity of materials replaced traditional heterogeneity and concrete became a material of choice for construction. Such practices, however, caused several problems. Industrialization caused pollution of cities but more importantly it caused flight from rural areas that further caused discrepancies in production, which damaged the economy. There was insufficiency of infrastructure, electricity, water and central heating to sustain new public housing development due to poor planning while residential skyscrapers inappropriately intermingled with existing architectural context. Poor construction methods and lack of quality due to lack of resources caused unhealthy living environments. All these issues led to diminishing cultural identity of Bosnia and Herzegovina while draining its natural and human resources. On the other hand there were few architectural projects that attempted to address issues of cultural diversity. Residential House “Dino” in Sarajevo built in 1987 by Amir Vuk and Mirko Maric was one of those attempts. It is the duplex residential house where one follows the oriental architectural vocabulary while the other has rather western European philosophy of the façade organization while they share a common entrance. Another example is the Holiday Inn Hotel built in 1983 and the “Unis” Twin Towers built in Sarajevo in 1986 and designed by Ivan Štraus. Among the people of the city, the twin towers are commonly called Momo (Serbian name) and Uzeir (Bosniak name). There is no consensus among the people of the city which tower carried the Serbian or Bosnian name. This ambiguity of the names accentuated the cultural unity as its primary architectural quality.

In 1992, the Republika Srpska army besieged Sarajevo (in what would come to be referred to as the infamous Siege of Sarajevo) and shelled both of the twin towers. During the Bosnian War from 1992–1995, over 2000 mosques, monasteries, and churches were destroyed by Serb, Croat and Bosniak (Bosnian Muslim) forces. Among those demolished were the Ferhadija mosque (built in 1578 in Banja Luka and bulldozed in 1993) and Stari most built in 1566 as mentioned earlier. Today Stari most divides the city into the eastern part which Bosniaks reside and the western part which Croats reside. 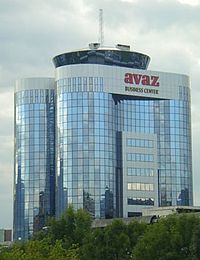 New Avaz Tower constructed on same site where the Oslobodjenje newspaper towers, which were destroyed in the war, once stood. 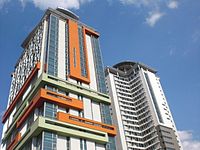 In the years following the Bosnian War, there has been a construction boom in Sarajevo. It is among the cities with the most construction in South-east Europe. The UNIS Twin Towers, designed by architect Ivan Straus, were almost totally destroyed in the war, but have been renovated completely. In the Hrasno residential area, the Bosnian company Bosmal has constructed the "Bosmal City Center", one of the tallest twin towers in the Balkans at 120 meters each.

The new owners of the Holiday Inn Hotel in Sarajevo, also designed by architect Ivan Straus, announced that as of 2005[update] they will start construction on a new 22 story tower. The so-called 'intelligent' tower is expected to cost about 50 million euros.

The Unis Twin Towers have been renovated completely. On the site of the former Oslobodjenje Towers, the Avaz towers have now been constructed as new headquarters for Avaz, the popular Bosnian newspaper company. It’s located in Marin Dvor, Sarajevo's business district which has recently been totally renovated with the plans for the Unitic 3 and Grand Media Center. The new tower went under construction in 2006 and it is expected to be completed some time in 2008. The Avaz Twist Tower will hold the record for being the Balkan's tallest tower and one of the most interesting towers in Europe. It is made up of a twisting glass facade and will be 142 meters tall with a 30 meter antenna reaching a total height of 172 meters.

Most of the Olympic venues were destroyed but reconstruction has not yet taken place.[1]

The Bosnian Parliament building (from architect Juraj Neidhart) is under re-construction, and the Museum of Bosnia and Herzegovina in Sarajevo's Marin Dvor area is totally renovated.

In Sarajevo's Ilidža suburb many construction projects which could be considered large by even EU standards have been started. Examples include a project to build a cable car to connect to the nearby mountains Igman and Bjelasnica; a sport complex with swimming pools worth 30 million euro; and the 'Gardens of Riverina' - city within the city which will cost more than 1 billion euro over a ten year period.

Recently, one section of the future European motorway corridor 5C was constructed and opened for traffic near Sarajevo. Soon the Federal government will start construction on a new 40 km long motorway section from Sarajevo to Zenica. The construction of the whole 330 km of 5C was planned to be started in spring 2006, and worth approximately 3 billion euros.

Bjelasnica and Igman Olympic Mountains are under plans to be privatized and reconstructed.

Cultural preservation is under way in Bosnia and Herzegovina which can be seen with the most recent reconstruction of Stari most in Mostar and many other structures of cultural and historical significance which were damaged or destroyed in the recent war. Many other projects, unfortunately, are still stifled by political disputes and lack of funds.

The doctrine that is generally followed in preservation was summarized by Italo C. Angle:[2]