Infobox Film
name = Save The Tiger 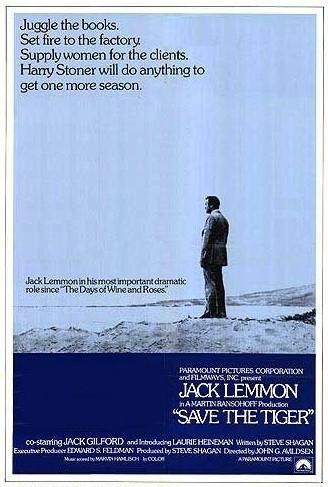 Jack Lemmon plays Harry Stoner, an executive at an L.A. apparel company on the edge of ruin. Throughout the film, Stoner struggles with the complexity of modern life versus the simplicity of his youth. He longs for the days when pitchers wound up, filled the air, and the flag was more than a pattern to put on a jock-strap. He wrestles with the guilt of surviving the war and yet losing touch with the ideals for which his friends died. To Harry Stoner, the world has given up on integrity, and threatens to destroy anyone who clings to it. He is caught between watching everything he has worked for evaporate, or becoming another grain of sand in the erosion of the values he once held so dear.

Save the Tiger is a bleak story that depicts an outwardly successful man questioning the value of the material prosperity he's desperately trying to maintain. Lemmon plays Harry Stoner, an executive at an L.A. apparel company close to ruin. With no legal way to keep the company from going under, Stoner considers torching his warehouse for the insurance settlement. Meanwhile, he drinks, laments the state of the world, and tries his best to keep the business rolling as usual. This last task is complicated when a client has a heart attack in the arms of a prostitute Stoner sent him to. With nerves still bristling, Stoner takes the stage at the premiere of his company's new line, only to be overcome by war memories. He ends the day spontaneously deciding to go home with a young, free-spirited hitchhiker, whose ignorance of his generation underscores his isolation from the world around him. At the end of the film, Stoner walks by a game and attempts to act as pitcher to the children. One child shouts out, "You can't play with us, Mister!", leaving Stoner yet again isolated from another part of society.

Juggle the books. Set fire to the factory. Supply women for the clients. Harry Stoner will do anything to get one more season.

The movie was written by and directed by .

Lemmon was determined to make the movie, despite its limited commercial prospects, and so he waived his usual salary and worked for scale.

It won the (Jack Lemmon) and was nominated for Best Actor in a Supporting Role (Jack Gilford) and Best Writing, Story and Screenplay Based on Factual Material or Material Not Previously Published or Produced.

The movie was filmed in sequence after three weeks of rehearsal in Los Angeles.