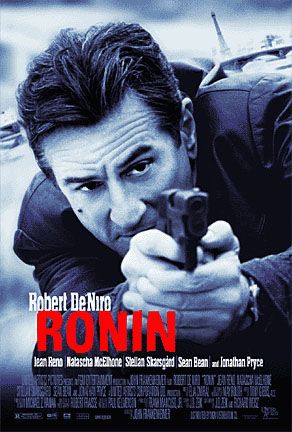 "Ronin" is a 1998 action- written by and and directed by . It stars and as two of several former special forces and intelligence agents who team up to steal a mysterious, heavily guarded suitcase while navigating a maze of shifting loyalties and alliances. The film is noted for its sensational car chases.

In a café, an Irish woman named Deirdre () meets five men, taking them to a warehouse and briefing them on a mission. The men, Spence (), Larry (), Gregor (), Vincent () and Sam (), are all former soldiers or intelligence operatives now working as . The team will attack a heavily-armed convoy and steal a suitcase, its contents unknown (a ). Following the briefing, the team begins assembling their equipment. Deirdre meets with her handler Seamus (), who reveals that Russian gangsters are bidding for the case and that the team must act quickly to intercept it. Later at the warehouse, Spence is exposed as a fraud and is summarily released from the team, who then depart for , where for the next several days they observe the convoy and plan an ambush. The team engages the convoy and pursue the survivors through the surrounding highways in the country. After a lengthy car chase and gun battle, they successfully obtain the case, but Gregor betrays the team and steals the case for himself before disappearing, leaving a fake case that explodes, seriously injuring Larry.

Gregor attempts to sell the case to the Russians but shoots his contact when he attempts betrayal. Gregor contacts Mikhi, the leader of the gangsters and threatens to sell the case to the Irish unless Mikhi pays a grossly inflated price for it, which Mikhi agrees to. Meanwhile, the rest of the team track Gregor through one of Sam's old contacts and corner him in the Roman arena in . Following a tense standoff and hectic gunfight with Gregor and the Russians negotiating with him, Gregor escapes the coliseum but is kidnapped by Seamus, who kills Larry and escapes with Deirdre just as Sam and Vincent emerge from the coliseum. Sam, seriously wounded from the fight, is taken by Vincent to his friend Jean-Pierre () in a villa in rural France. After removing the bullet and allowing Sam time to recuperate, Vincent asks Jean-Pierre to help him locate Gregor, Dierdre and Seamus. Meanwhile, in a Paris slum, Seamus learns that Gregor has mailed the case to himself at a post office in Paris. Later, as they retrieve the case, they are ambushed by Vincent and Sam. Following a high-speed chase through the streets and tunnels of Paris, Vincent shoots out Deirdre's tires and sends her car over a highway overpass. The three are pulled from the car by construction workers shortly before it explodes, and Gregor once again escapes with the case.

Vincent and Sam, considering their options, discover that the case is identical to one used by figure skaters. Intelligence gleaned from Jean-Pierre's contacts also suggest the Russians are involved with figure skater Natacha Kirilova (), the of Mikhi, who is performing a show at the local arena that night. Vincent and Sam appear at the arena as Mikhi, already there with Natacha, receives a call from Gregor, who demands to meet in a backstage dressing room. At the meet, Mikhi exchanges money for the case when Gregor, prepared to leave, reveals that he has positioned a sniper somewhere in the arena that will shoot Natacha if Gregor is betrayed. Mikhi shoots Gregor regardless, allowing Natacha to be killed, and Mikhi prepares to leave with the case and his money. Meanwhile, Vincent and Sam follow the panicked crowd out of the arena in time to see Seamus ambush and shoot Mikhi before stealing the case. Sam runs ahead of Seamus and finds Deirdre sitting in the getaway car, where he asks her to leave the scene, revealing himself as an agent of the currently pursuing Seamus. Deirdre flees, leaving Seamus to shoot his way past Vincent and escape through the crowd back to the arena with Sam in pursuit. In the final gunfight, Seamus wounds Sam and prepares to kill him when Vincent opens fire from the scaffolding, killing Seamus before collapsing due to his own wounds.

Some time later radio broadcasts reveal a peace agreement has been reached between and the British as a result of Seamus's death. Sam and Vincent share a drink in the same café from the first scene and part as friends before Sam drives off with his CIA contact, Vincent disappears up a nearby staircase into gloomy Paris.

The contents of the metal case are never revealed (see ). Mamet has written that he believes revealing such details can be anticlimactic, that a director is wiser to allow the audience's imagination to answer the question. This is a technique Mamet has used repeatedly in his films. In fact, in earlier versions of the script, the briefcase is destroyed at the climax. Sam observes that only the top men in the Russian mob and the IRA, plus a handful of men in the CIA knew what was in the case. In the DVD's director's commentary, Frankenheimer says that in the film, Seamus is the only person who actually needs to know what the case contains. As an aside, on the film's web site when Ronin was in theatres, the public could suggest and vote for what they thought could be in the case. One of the popular suggestions was 'Guinness.'

Writer David Mamet is credited as "Richard Weisz", reportedly due to disappointment at having to share credit with Zeik (the originating writer). According to production sources (notably Zeik's lawyer), Mamet's contributions were "minor", limited to adding the character Deirdre and most of De Niro's scenes. According to Frankenheimer, "The credits should read: "Story by J.D. Zeik, screenplay by David Mamet." We didn't shoot a line of Zeik's script." [cite web
url=http://articles.latimes.com/1998/aug/05/entertainment/ca-10109
title=Mamet Versus Writers Guild, the Action Thriller Sequel
first=Eric |last=Harrison |date=,
publisher=""] This is confirmed by a copy of Zeik's original script, which shows his very minor contributions. [cite web
url=http://www.imsdb.com/scripts/Ronin.html
title=RONIN: an original screenplay
first=J.D. |last=Zeik |date=,
publisher=The Internet Movie Script Database (IMSDb)]

The title is derived from the Japanese term , used for who have no master and whose motivations are largely based on money and survival instead of honor and duty. Many of the characters in the film are unemployed agents set adrift by the end of the . The film also makes a lengthy reference to the classic Japanese story, the , further alluding to the identities of the protagonists and antagonists of the film.

According to Frankenheimer's recollections on the DVD, there were 2,200 shots use to film the story.

"Ronin" is notable for a number of car chases, the last being a particularly lengthy one through the streets and tunnels of ; some scenes used up to 300 stunt drivers according to the DVD director commentary. Car work has been a speciality of Frankenheimer, a former amateur racing driver [Bowie, S. [http://www.sensesofcinema.com/contents/directors/06/frankenheimer.html "John Frankenheimer"] , "Senses of Cinema", August 2006. Accessed ] , ever since his 1966 film, "Grand Prix". Although action sequences are often shot by a second unit director, Frankenheimer did all these himself, and sometimes rode along. While he was aware of the many innovations in digital since then, he elected to film all these sequences live, to obtain the maximum level of authenticity. To further this, many of the high-speed shots have the actual actors in the cars. did nearly all of his own driving, while other cars were right hand drive models with stunt drivers driving - crashes were handled by a stuntman. To lend additional authenticity, the sound recordist re-recorded many of the vehicles in the chases to ensure that during the editing, the right sounds were dubbed in for each vehicle. The chases are also notable for their lack of musical score accompaniment, unusual in modern films, though the last chase ends with syncopated, non-melodic music. The choice of non-melodic music was easier to edit to, and has since become fashionable in film and television Fact|date=September 2008.

The final scene at the ice rink had 2,000 extras, according to Frankenheimer.

The DVD release has an extensive, detailed commentary about the making of the film by Frankenheimer, where he explains the production techniques used to realize the high speed chases.

The DVD's paper insert includes excerpts from a Frankenheimer interview in which he discusses the chase through a Paris tunnel that is remarkably similar to the site of 's death on . The filming took place in a different tunnel, however. "Paris has a lot of tunnels," Frankenheimer commented. "That’s part of the thing about the city I wanted people to see. A crash in a tunnel in Paris is about as likely as someone having a crash on a freeway here. It happens all the time." (Rocky Mountain News, , ).

The US edition of the original DVD release has several navigational hooks to DVD-ROM content, which were taken advantage of several weeks after the original release of the DVD, on MGM's website during a special 'RONIN' event where viewers would be taken on a guided tour of the making of RONIN. Making-of scenes shot during filming are hidden on the DVD, since they are not present on the main menu of the DVD you can only access them on a computer using the DVD-ROM program that is on the disc or using a DVD viewing program that let you navigate through the titles of the disc manually.

An "alternate ending" on the DVD depicts Deirdre being ambushed and carried off in a van, accused of treason by her Irish colleagues.

On , a two-disc Special Edition of the movie was released in the US. This new version contains the same things as the old single disc version on disc one and on disc two there are supplemental material about the movie: one documentary, six featurettes and a picture gallery.