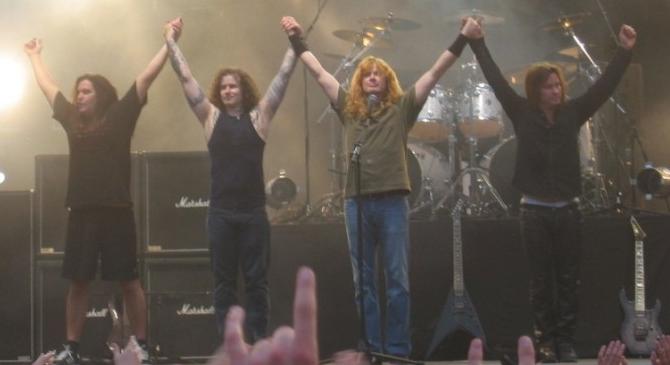 Shawn Drover is the drummer with the bands & Eidolon. He was born on , , in , . After taking up drums at the age of 13, he joined his first band, Eidolon. He uses Sabian cymbals and drums mounted on a drum rack reminiscent of the .

While in rehearsal for "Blackmail The Universe Tour" in October 2004, five days before the first show, Shawn replaced newly returned drummer in band , who was unable to prepare for the physical demands of a full US tour.

Shawn also plays guitar. He was playing guitar during Megadeth's "Blackmail The Universe Tour" in Kawasaki, (, 2005). Shawn and his brother switched instruments playing "Paranoid" and the second half of "Peace Sells". Glen sat at the drums, and Shawn played the guitar.
During show in Toronto, Canada (, 2005) Shawn became the third Megadeth guitarist on stage during "Peace Sells" while of played the drums. Shawn also did one solo of the song.

The night after the statements were released that Shawn's brother Glen had quit Megadeth, Shawn brought up as a possible replacement. Shawn then proceeded to show Dave a video of Chris playing both classical and electric guitar. Dave was immediately won over and soon managed to get in contact with Chris. Two weeks later, Broderick was officially declared the new guitarist for Megadeth.

As opposed to many drummers, who cross over their sticks to play the hi-hat with their right hand and snare with their left hand, Shawn instead keeps time with his left hand, keeps a ride cymbal on the left side of his set, and relegates his right hand for snare drum hits (similar to ). Although the role of each hand is reversed, he still begins rolls and downbeats on rhythms played on other drums with his right hand, as do many right-handed drummers.

Shawn Drover endorses Ddrum, Sabian, Gibraltar Hardware and Vic Firth. The "MegaKit" used on the more recent tours (2004-2006) was manufactured by Ferguson Fabrication out of Tempe AZ. The structure was revised and redesigned making the cage lighter and easier to assemble.