The Daimler-Benz DB 605 is a German aircraft engine, built during World War II. Developed from the DB 601, the DB 605 was used from 1942 to 1945 in the Messerschmitt Bf 109 fighter, and the Bf 110 and Me 210C heavy fighters. The DB 610, a coupled "power system" powerplant comprising a pair of side-by-side configured examples of the DB 605, geared together in the front to turn a single output shaft, was used in Germany's only operational heavy bomber, the Heinkel He 177.

The primary differences between the 605 and 601 were the greater displacement, higher revolutions, higher compression ratio and a more powerful supercharger. Through careful study the engineers determined that the cylinders could be bored out to a larger diameter without seriously affecting the strength of the existing block. The difference was minimal, increasing from the 601's 150 mm cylinder bore to the 605's 154 mm, but this increased the overall displacement from 33.9 litres to 35.7. Altered valve timing increased the inlet period and improved the scavenging to give greater volumetric efficiency at higher speeds, which improved the maximum allowable RPM from 2,600 in the 601 to 2,800 in the 605. The combination of these changes improved power from 1,350 PS (1,332 hp) to 1,475 PS (1455 hp). The engine was otherwise similar, notably in size, which was identical to the 601. However, weights did increase from 700 to 756 kg. 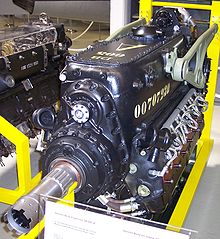 In other ways the engine was essentially identical to the 601. Both used dual Bosch magnetos firing twin spark plugs for ignition. Fuel injection was powered by a pump supplying up to 90 bar and the oil system used three pumps with a separate 35 litre oil tank. The supercharger was fairly advanced for the era in that it used a barometrically controlled hydraulic clutch (fluid coupling) which allowed the system to automatically compensate for changes in altitude.

Like the 601 the 605 was designed to run on "B4" fuel with an octane rating of 87. In 1944 a series of newer engines was introduced, allowing the engine to run on the 100 octane "C3" fuel and optionally including fittings for various optional power-boosting agent dispensing systems, such as the MW50 methanol-water injection system, and GM-1 nitrous oxide injection system. The DB 605AM, running initially on C3 and MW-50, saw power improved to 1,800 PS (1775 hp) for takeoff. In mid-1944, the requirement for C3 was dropped and B4 + MW-50 was used. The DB 605AS(M) improved the maximum rated altitude by using a larger supercharger taken from the DB 603 but was otherwise similar to the A(M). The DB 605ASB's takeoff power was also rated at 1,800 PS (1,775 hp), while maintaining the high-altitude performance of the ASM. The final version of the A-series was the DB 605ASC of 1945, which improved takeoff power to 2,000 PS (1,973 hp). 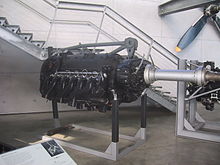 A Hispano Aviación HA-1112 a license-built Messerschmitt Bf 109 G-2 has been rebuilt by EADS/Messerschmitt Foundation in Germany with a Daimler-Benz DB 605 engine.[3]

A preserved DB 605 engine is on display at the Royal Air Force Museum, London.