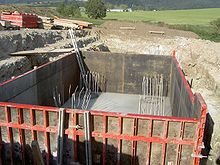 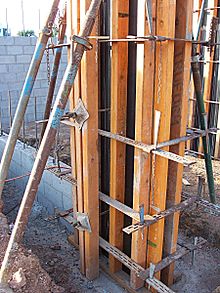 Timber formwork for a concrete column 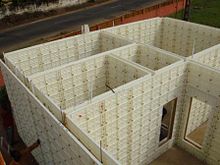 Formwork is the term given to either temporary or permanent molds into which concrete or similar materials are poured. In the context of concrete construction, the falsework supports the shuttering moulds. 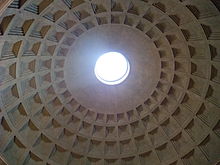 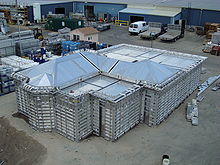 Modular formwork with deck for housing project in Chile 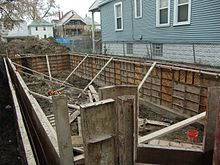 Steel and Plywood Formwork for Poured in Place Concrete Foundation

Some of the earliest examples of concrete slabs were built by Roman engineers. Because concrete is quite strong in resisting compressive loads, but has relatively poor Tensile or torsional strength, these early structures consisted of arches, vaults and domes. The most notable concrete structure from this period is the Pantheon in Rome. To mould these structure, temporary scaffolding and formwork or falsework was built in the future shape of the structure. These building techniques were not isolated to pouring concrete, but were and are widely used in Masonry. Because of the complexity and the limited production capacity of the building material, concrete’s rise as a favored building material did not occur until the invention of Portland cement (and developments by the Edison Portland Cement Company) and reinforced concrete. 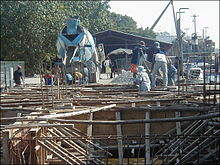 Traditional timber formwork on a jetty in Bangkok

On the dawn of the rival of concrete in slab structures, building techniques for the temporary structures were derived again from masonry and carpentry. The traditional slab formwork technique consists of supports out of lumber or young tree trunks, that support rows of stringers assembled roughly 3 to 6 feet or 1 to 2 metres apart, depending on thickness of slab. Between these stringers, joists are positioned roughly 12 inches, 30 centimeters apart upon which boards or plywood are placed. The stringers and joists are usually 4 by 4 inch or 4 by 6 inch lumber. The most common imperial plywood thickness is ¾ inch and the most common metric thickness is 21 mm.

Similar to the traditional method, but stringers and joist are replaced with aluminium forming systems or steel beams and supports are replaced with metal props. This also makes this method more systematic and reusable.

These systems consist of prefabricated timber, steel or aluminum beams and formwork modules. Modules are often no larger than 3 to 6 feet or 1 to 2 metres in size. The beams and formwork are typically set by hand and pinned, clipped, or screwed together. The advantages of a modular system are: does not require a crane to place the formwork, speed of construction with unskilled labor, formwork modules can be removed after concrete sets leaving only beams in place prior to achieving design strength.

These systems consist of slab formwork "tables" that are reused on multiple stories of a building without being dismantled. The assembled sections are either lifted per elevator or "flown" by crane from one story to the next. Once in position the gaps between the tables or table and wall are filled with "fillers". They vary in shape and size as well as their building material. The use of these systems can greatly reduce the time and manual labor involved in setting and striking the formwork. Their advantages are best utilized by large area and simple structures. It is also common for architects and engineers to design building around one of these systems. 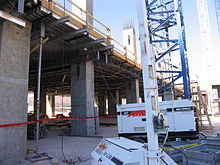 Flying formwork tables with aluminium and timber joists. The tables are supported by shoes attached to previously poured columns and walls

A table is built pretty much the same way as a beam formwork but the single parts of this system are connected together in a way that makes them transportable. The most common sheathing is plywood, but steel and fiberglass are also in use. The joists are either made from timber, wood I-beams, aluminium or steel. The Stringers are sometimes made of wood I-beams but usually from steel channels. These are fastened together (screwed, weld or bolted) to become a "duck". These decks are usually rectangular but can also be other shapes.Afcons Infrastructure Limited

All support systems have to be height adjustable to allow the formwork to be placed at the correct height and to be removed after the concrete is cured. Normally adjustable metal props similar to (or the same as) those used by beam slab formwork are used to support these systems. Some systems combine stringers and supports into steel or aluminum trusses. Yet other systems use metal frame shoring towers, which the decks are attached to. Another common method is to attach the formwork decks to previously cast walls or columns, thus eradicating the use of vertical props altogether. In this method, adjustable support shoes are bolted through holes (sometimes tie holes) or attached to cast anchors.

This technique is fairly common in the United States and east Asian countries. The advantages of this approach are the further reduction of manual labour time and cost per area of slab and a simple and systematic building technique. The disadvantages of this approach are the necessary high lifting capacity of building site cranes, additional expensive crane time, higher material costs and little flexibility.

By this approach the tables are limited in size and weight. Typical widths are between 6 to 10 ft or 2 to 3 meters, typical lengths are between 12 and 20 ft or 4 to 7 metres, though table sizes may vary in size and form. The major distinction of this approach is that the tables are lifted either with a crane transport fork or by material platform elevators attached to the side of the building. They are usually transported horizontally to the elevator or crane lifting platform singlehandedly with shifting trolleys depending on their size and construction. Final positioning adjustments can be made by trolley. This technique enjoys popularity in the US, Europe and generally in high labor cost countries. The advantages of this approach in comparison to beam formwork or modular formwork is a further reduction of labor time and cost. Smaller tables are generally easier to customize around geometrically complicated buildings, (round or non rectangular) or to form around columns in comparison to their large counterparts. The disadvantages of this approach are the higher material costs and increased crane time (if lifted with crane fork).

For removable forms, once the concrete has been poured into formwork and has set (or cured), the formwork is struck or stripped (removed) to expose the finished concrete. The time between pouring and formwork stripping depends on the job specifications, the cure required, and whether the form is supporting any weight, but is usually at least 24 hours after the pour is completed. For example, the California Department of Transportation requires the forms to be in place for 1–7 days after pouring,[1] while the Washington State Department of Transportation requires the forms to stay in place for 3 days with a damp blanket on the outside.[2] 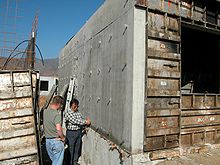 Spectacular accidents have occurred when the forms were either removed too soon or had been under-designed to carry the load imposed by the weight of the uncured concrete. Less critical and much more common (though no less embarrassing and often costly) are those cases in which underdersigned formwork bends or breaks during the filling process (especially if filled with a high-pressure concrete pump). This then results in fresh concrete escaping out of the formwork in a form blowout, often in large quantities.

Concrete exerts less pressure against the forms as it hardens, so forms are usually designed to withstand a number of feet per hour of pour rate to give the concrete at the bottom time to firm up. For example, wall or column forms are commonly designed for a pour rate between 4–8 ft/hr.[citation needed] The hardening is an asymptotic process, meaning that most of the final strength will be achieved after a short time, though some further hardening can occur depending on the cement type and admixtures.

Wet concrete also applies hydrostatic pressure to formwork. The pressure at the bottom of the form is therefore greater than at the top. In the illustration of the column formwork to the right, the 'column clamps' are closer together at the bottom. Note that the column is braced with steel adjustable 'formwork props' and uses 20 mm 'through bolts' to further support the long side of the column.