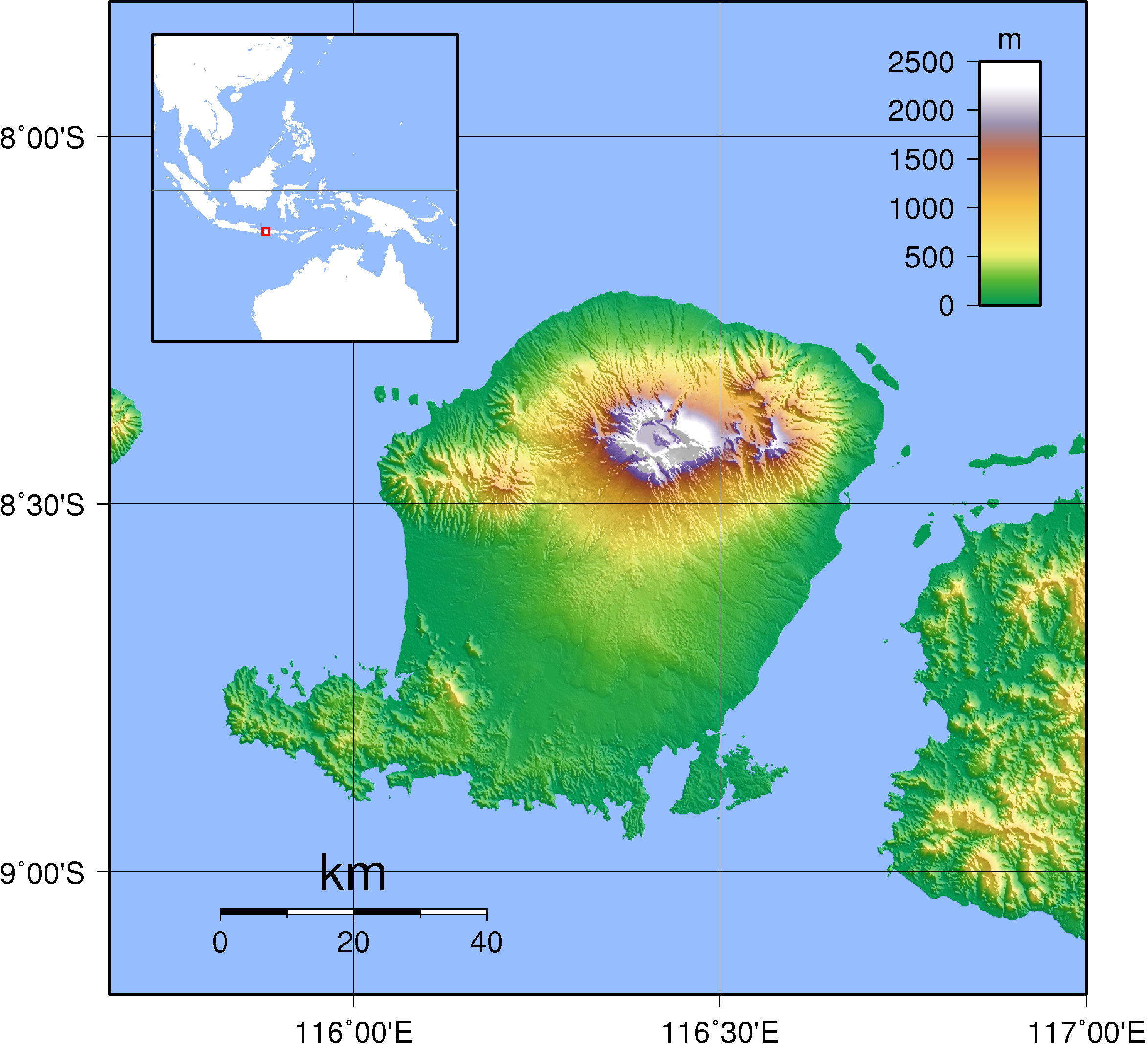 Lombok (population 2,950,105 in ) is an in province, . It is part of the chain of the , with the separating it from to the west and the between it and to the east. It is roughly circular, with a "tail" to the southwest, about 70 km across and a total area of about 4,725 km² (1,825 sq mi). The administrative capital and largest city on the island is Mataram.

The Dutch first visited Lombok in and settled the eastern most part of the island, leaving the western half to be ruled by a Hindu dynasty from Bali. The Sasaks chafed under Balinese rule, and a revolt in ended in with the annexation of the entire island to the .

The island's topography is dominated by the centrally-located , which rises to 3,726 m (12,224 ft), making it the third-highest in Indonesia. The most recent eruption of Rinjani was in June-July, 1994. The volcano, and its sacred crater lake, 'Segara Anak' (child of the sea), are protected by a National Park established in . The southern part of the island is a fertile plain where corn, , , , and are grown.

The island's inhabitants are 85% (a people, related to the , but mostly practising ), 10-15% , with the small remainder being Chinese, , Javanese, and nese.

Lombok has much in common with nearby Bali, but less well-known and less-visited by foreigners [http://travel.nytimes.com/2008/09/21/travel/21next.html?ref=travel] . It has been working to increase its visibility to s in recent years, promoting itself as an "unspoiled Bali". The most-developed center of tourism is , spread in a 10-kilometer strip along the coastal road north of Mataram, while backpackers congregate in the off the west coast. Other popular tourist destinations include Kuta (distinctly different from Kuta, Bali) where surfing is considered some of the best in the world by leading surfing magazines. The Kuta area is also famous for its beautiful, untouched beaches.

While the area may be considered economically depressed by First World standards, the island is fertile, has sufficient rainfall in most areas for agriculture, and possesses a variety of climate zones. Consequently, food in abundant quantity and variety is available inexpensively at local farmer's markets. A family of 4 can eat rice, vegetables, and fruit for as little as 0.50. Even though a family income may be as small as 1.00 per day from fishing or farming, many families are able to live a happy and productive live on astonishingly small incomes.

In early thousands fled from religious and ethnic violence that swept over the island, and tensions remain. Some travel websites warn that tourists sometimes provoke anger in this economically depressed region. This warning lacks credibility, since all of Lombok has had a long history of welcoming visitors to the island. Both the government and many of the residents recognize that tourism and the services required by tourists is Lombok's highest source of income. Further proof of the island's hospitality is show by the fact that tourists are virtually never seriously injured by any interaction with the local population. While many of the local population are friendly, there is certainly an element of danger and numerous travelers have shared accounts of violence, particularly in the Kuta region where locals, displaced by hotel projects, resent foreign presence. There is also a on the island, costs paid for by Australia, which holds mostly Hazara Afghans who have tried to enter Australia by boat.

, Emirati property company planned to build a new town sprawled in 1,200 hectares in Central Lombok. It costs estimated at US$600 million. It will have a 7 km natural waterfront, which will support a marina, apart from luxury residences and five-star resorts by [ [http://www.tempointeraktif.com/hg/nasional/2008/03/19/brk,20080319-119543,id.html Tempo Interaktif] ] . The Ritz-Carlton will also have a world class golf course and retail amenities. The homes will employ tropical designs and low-rise architecture in tune with the surroundings. [ [http://www.emaar.com/MediaCenter/PressReleases/2007April30.asp Emaar] ]