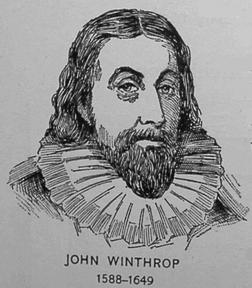 John Winthrop ( 1587/8ndash ) led a group of English s to the , joined the in 1629 and was elected their governor in October 1629. Between 1639 and 1648 he was voted out of and re-elected a total of 12 times. Although Winthrop was a respected political figure, he was criticized for his obstinacy regarding the formation of a general assembly in 1634.

Winthrop was born in , , , the son of Adam Winthrop (1548&ndash;1623) and his wife, . Winthrop briefly attended , then studied at , and in the 1620s became a lawyer at the in .Winthrop was extremely religious and subscribed fervently to the belief that the had to be cleansed of ritual. Winthrop was convinced that God would punish England for its heresy, and believed that English Puritans needed a shelter away from England where they could remain safe during the time of God's wrath.

Other Puritans who believed likewise obtained a royal charter for the Massachusetts Bay Company. was apparently unaware that the colony was to be anything other than a commercial venture to America. However, on , , Winthrop signed the with his wealthier Puritan friends, essentially pledging that they would embark on the next voyage and found a new Puritan colony in . The colony's land was taken from Native Americans with Winthrop's excuse that the natives hadn't "subdued" the land and thus had no "civil right" to it. [ Howard Zinn "A People's History of the United States." New York: Harper & Row Publishing. ] Winthrop pledged £400 to the cause and set sail on the ship the [The Peerage.com] —named after the wife of Isaac Johnson, daughter of Thomas Clinton, 3rd Earl of Lincoln. Winthrop befriended the younger Johnson (29 years old at his death) in earlier days in England, spending many days at Isaac's family home. The first Englishman in the Boston area, Blackstone, was a childhood and best friend of Isaac; they attended seminary together. Isaac's grandmother, the Lady Chatterton, was the daughter of one of the translators, and the Johnson family owned two seminaries in England, one still used as a school to this day. Isaac Johnson's family lines can be traced to the earlier of England from the Johnsons of Rouen, France, and are associated with William "the Bastard" as well as the earlier 968 conquest of southern England (Kent). The Johnsons, per the London Herald of Arms, were part of four crusades and fought with . Winthrop on Isaac Johnson's death put in probate a sum of over £75,000. Isaac's brother Capt. James Johnson, on his arrival in 1635 was denied his title and right to Isaac's property. With the help of Dudley and others Winthrop kept this wealth in probate, and took fees, for over 30 years. Many documents were destroyed in a very mysterious manner. The documents were part of the "doomsday record" kept by the founders of Boston. Winthrop and others accused Johnson's wife of adultery and placed her on gallows with the rope on neck, only to let her go. Capt. James Johnson's only crime was to allow his wife to have Bible studies in his home with , "a good woman of the Christian faith" who along with the Lady Arbella came from Lincolnshire, England.

Claims to inheritance were presented to the royal court in London by the father Abraham Johnson a Sheriff of the Queen (Rutland, North of Nottingham). Isaac Johnson was buried with his wife the Lady Arbella of Lincolnshire on his land, now called King's Chapel, on Tremont Street, Boston. A reference is made to Isaac Johnson in the first chapter of the book "The Scarlet Letter".

Winthrop endangered his servants for the purpose of running his enterprises and docks; "they had not clean water and many died before Winthrop was urged to move to Boston".

Winthrop saw to the hanging of Mary Latham and James Britton in 1644, both found in adultery, but he also admitted to an encounter with an Indian woman at an abandoned settlement not far from his home. Many men searched for him all night only for him to be found not far from home with a very strange story to excuse himself with.

John Winthrop had been elected governor of the colony prior to departure in 1629, and he was re-elected many times. As governor he was one of the least radical of the Puritans, trying to keep the number of executions for heresy to a minimum and working to prevent the implementation of more conservative practices such as veiling women, which many Puritans supported.

Like his Puritan brethren, Winthrop strove to establish a Christian community that held uniform doctrinal beliefs. It was for this reason that in 1638 he presided over the heresy trial and banishing of from the colony. During this trial Winthrop referred to Hutchinson as an "American Jezebel." [Francis J. Bremer, " [http://www.questia.com/PM.qst?a=o&d=104232630 John Winthrop: America's Forgotten Founding Father] " (Oxford: Oxford University Press, 2003), p. [http://www.questia.com/PM.qst?a=o&d=104232929 299] .] Winthrop also subscribed to the belief that the native peoples who lived in the hinterlands around the colony had been struck down by God, who sent disease among them because of their non-Christian beliefs: "But for the natives in these parts, God hath so pursued them, as for convert|300|mi|km space the greatest part of them are swept away by which still continues among them. So as God hath thereby cleared our title to this place, those who remain in these parts, being in all not 50, have put themselves under our protection." [ [http://rwor.org/a/firstvol/883/thank.htm The Myth of Thanksgiving] .]

John Winthrop was voted out of government in 1634, but re-elected in 1646. He disagreeded with Roger Williams about this thing and was forced to banish the colony.

Winthrop married his first wife, , on at , , England. She bore him six children and died in June 1615. He married his second wife, , on at , England. She died on . On at , Essex, England Winthrop married his third wife, , daughter of and his wife . Margaret Tyndall gave birth to six children in England before the family emigrated to New England (The Governor, three of his sons, and eight servants in 1630 on the "Arbella", and his wife on the second voyage of the "Lyon" in 1631, leaving their small manor behind). One of their daughters died on the "Lyon" voyage. Two children were born to them in New England. Margaret died on in . Winthrop then married his fourth wife, , widow of and sister of the famous Thomas and , sometime after and before the birth of their only child in 1648, he died of natural causes. His son, , whose mother was Mary Forth, later became Governor of .

Winthrop is most famous for his "" sermon (as it is known popularly, its real title being "A Model of Christian Charity"), in which he declared that the Puritan colonists emigrating to the New World were part of a special pact with God to create a holy community. This speech is often seen as a forerunner to the concept of . The speech is also well known for arguing that the wealthy had a holy duty to look after the poor. Recent history has shown, however, that the speech was not given much attention at the time of its delivery. Rather than coining these concepts, Winthrop was merely repeating what were widely held Puritan beliefs in his day. The work was not actually published until the nineteenth century, although it was known and circulated in manuscript before that time. Winthrop did publish "The Humble Request of His Majesties Loyal Subjects" (London, 1630), which defended the emigrants’ physical separation from England and reaffirmed their loyalty to the Crown and Church of England. This work was republished by in the 1696 compilation [http://digitalcommons.unl.edu/scottow/7/ "MASSACHUSETTS: or The first Planters of New-England, The End and Manner of their coming thither, and Abode there: In several EPISTLES"] .

Modern American politicians, like , continue to cite Winthrop as a source of inspiration. However, those who praise Winthrop fail to note his strident anti-democratic political tendencies. Winthrop stated, for example, "If we should change from a mixed aristocracy to mere democracy, first we should have no warrant in scripture for it: for there was no such government in Israel ... A democracy is, amongst civil nations, accounted the meanest and worst of all forms of government. [To allow it would be] a manifest breach of the 5th Commandment." [ R.C. Winthrop, "Life and Letters of John Winthrop" (Boston, 1869), vol. ii, p. 430. ]

Winthrop was not governor at the outset of the Pequot war and bore only an indirect responsibility for its outcome. The decision to sell the survivors as slaves in the Bahamas was a societal response and not a personal choice.Fact|date=October 2007

The Town of , is named after him, as is at , though the house is also named for the John Winthrop who briefly served as President of Harvard.