Unlike new issue stocks that are brought to market with price restrictions until the deal is sold, municipal bonds are free to trade at any time once they are purchased by the investor. Professional traders regularly trade and retrade the same bonds several times a week.

Historically municipal debt predates corporate debt by several centuries: the early Renaissance Italian city-states borrowed money from major banking families. Borrowing by American cities dates to the seventeenth century; records of U.S. municipal bonds indicate use around the early 1800’s. Officially the first recorded municipal bond, a general obligation bond was issued by the City of New York for a canal in 1812. During the 1840’s, many U.S. cities were in debt; roughly by 1843 cities had about 25 million in outstanding debt. In the pursuing decades rapid urban development demonstrated a correspondingly explosive growth in municipal debt. The debt was used to finance both urban improvements and a growing system of free public education.

Years after the civil war, significant local debt was issued to build railroads. Railroads were private corporations and these bonds were very similar to today’s industrial revenue bonds. Construction costs in 1873 for one of the largest transcontinental railroads, the northern pacific closed down access to new capital.

The largest bank of the country, which was owned by the same investor as by Northern Pacific, collapsed. Smaller firms followed suit as well as the stock market. The 1873 panic and years of depression that followed put an abrupt but temporary halt to the rapid growth of municipal debt.

Responding to widespread defaults that jolted the municipal bond market of the day, new state statues were passed that restricted the issuance of local debt. Several states wrote these restrictions into their constitutions. Railroad bonds and their legality were widely challenged; this gave rise to the market-wide demand that an opinion of qualified bond counsel accompany each new issue.

The U.S. economy began to move forward once again, municipal debt continued its momentum, this maintained well into the early part of the twentieth century. Regrettably the great depression of the 1930’s halted growth, although defaults were not as severe as in the 1870s. Outstanding municipal debt then fell during World War II. Many American resources were devoted to the military. Prewar municipal debt burst into a new period of rapid growth for an ever-increasing variety of uses. After World War II, state and local debt was $145 per capita. In 1998, according to the U.S. census, state debt was $1,791 per capita. Local per capita debt in 1996, the most current Census data Available, was 2704. Federal debt was $20,374 per capita at the end of 1998.

In addition to the 50 states and their local governments (including cities, counties, villages and school districts), the District of Columbia and U.S. territories and possessions (American samoa, the commonwealth of Puerto Rico, Guam, the Northern Mariana Islands, and the U.S. virgin Islands) can and do issue municipal bonds. Another important category of municipal bond issuers includes authorities and special districts, which have grown in number and variety in recent years.

Municipal bonds provide tax exemption from federal taxes and many state and local taxes, depending on the laws of each state. Municipal securities consist of both short-term issues (often called notes, which typically mature in one year or less) and long-term issues (commonly known as bonds, which mature in more than one year). Short-term notes are used by an issuer to raise money for a variety of reasons: in anticipation of future revenues such as taxes, state or federal aid payments, and future bond issuances; to cover irregular cash flows; meet unanticipated deficits; and raise immediate capital for projects until long-term financing can be arranged. Bonds are usually sold to finance capital projects over the longer term.

The two basic types of municipal bonds are:

Most municipal notes and bonds are issued in minimum denominations of $5,000 or multiples of $5,000.

Municipal bonds are securities that are issued for the purpose of financing the infrastructure needs of the issuing municipality. These needs vary greatly but can include schools, streets and highways, bridges, hospitals, public housing, sewer and water systems, power utilities, and various public projects. 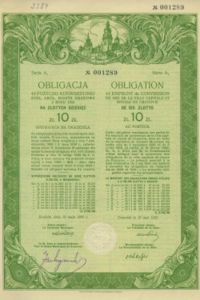 Municipal bond issued in 1929 by city of Kraków (Poland)

Municipal bonds are issued by states, cities, and counties, (the municipal issuer) to raise funds. The methods and traces of issuing debt are governed by an extensive system of laws and regulations, which vary by state. Bonds bear interest at either a fixed or variable rate of interest, which can be subject to a cap known as the maximum legal limit. If a bond measure is proposed in a local county election, a Tax Rate Statement may be provided to voters, detailing best estimates of the tax rate required to levy and fund the bond.

The issuer of a municipal bond receives a cash payment at the time of issuance in exchange for a promise to repay the investors who provide the cash payment (the bond holder) over time. Repayment periods can be as short as a few months (although this is rare) to 20, 30, or 40 years, or even longer.

The issuer typically uses proceeds from a bond sale to pay for capital projects or for other purposes it cannot or does not desire to pay for immediately with funds on hand. Tax regulations governing municipal bonds generally require all money raised by a bond sale to be spent on one-time capital projects within three to five years of issuance.[2] Certain exceptions permit the issuance of bonds to fund other items, including ongoing operations and maintenance expenses, the purchase of single-family and multi-family mortgages, and the funding of student loans, among many other things.

Because of the special tax-exempt status of most municipal bonds, investors usually accept lower interest payments than on other types of borrowing (assuming comparable risk). This makes the issuance of bonds an attractive source of financing to many municipal entities, as the borrowing rate available in the open market is frequently lower than what is available through other borrowing channels.

Municipal bonds are one of several ways states, cities and counties can issue debt. Other mechanisms include certificates of participation and lease-buyback agreements. While these methods of borrowing differ in legal structure, they are similar to the municipal bonds described in this article.

A bond measure is an initiative to sell bonds for the purpose of acquiring funds for various public works projects, such as research, transportation infrastructure improvements, and others. These measures are put up for a vote in general elections and must be approved by a plurality or majority of voters, depending on the specific project in question.

Such measures are very often used in the United States when other revenue sources, such as taxes, are limited or non-existent.

One of the primary reasons municipal bonds are considered separately from other types of bonds is their special ability to provide tax-exempt income. Interest paid by the issuer to bond holders is often exempt from all federal taxes, as well as state or local taxes depending on the state in which the issuer is located, subject to certain restrictions. Bonds issued for certain purposes are subject to the alternative minimum tax.

The type of project or projects that are funded by a bond affects the taxability of income received on the bonds held by bond holders. Interest earnings on bonds that fund projects that are constructed for the public good are generally exempt from federal income tax, while interest earnings on bonds issued to fund projects partly or wholly benefiting only private parties, sometimes referred to as private activity bonds, may be subject to federal income tax. However, qualified private activity bonds, whether issued by a governmental unit or private entity, are exempt from federal taxes because the bonds are financing services or facilities that, while meeting the private activity tests, are needed by a government.

The risk ("security") of a municipal bond is a measure of how likely the issuer is to make all payments, on time and in full, as promised in the agreement between the issuer and bond holder (the "bond documents"). Different types of bonds are secured by various types of repayment sources, based on the promises made in the bond documents:

In addition, there are several other types of municipal bonds with different promises of security.

The probability of repayment as promised is often determined by an independent reviewer, or "rating agency". The three main rating agencies for municipal bonds in the United States are Standard & Poor's, Moody's, and Fitch. These agencies can be hired by the issuer to assign a bond rating, which is valuable information to potential bond holders that helps sell bonds on the primary market.

Municipal bonds have traditionally had very low rates of default as they are backed either by revenue from public utilities (revenue bonds), or state and local government power to tax (general obligation bonds). However, sharp drops in property valuations resulting from the 2009 mortgage crisis have led to strained state and local finances, potentially leading to municipal defaults. For example, Harrisburg, PA, when faced with falling revenues, skipped several bond payments on a municipal waste to energy incinerator and did not budget more than $68m for obligations related to this public utility. The prospect of Chapter 9 municipal bankruptcy was raised by the Controller of Harrisburg, although it was opposed by Harrisburg's mayor.[3]

Key information about new issues of municipal bonds (including, among other things, the security pledged for repayment of the bonds, the terms of payment of interest and principal of the bonds, the tax-exempt status of the bonds, and material financial and operating information about the issuer of the bonds) typically is found in the issuer's official statement. Official statements generally are available at no charge from the Electronic Municipal Market Access system (EMMA) at http://emma.msrb.org operated by the Municipal Securities Rulemaking Board (MSRB). For most municipal bonds issued in recent years, the issuer is also obligated to provide continuing disclosure to the marketplace, including annual financial information and notices of the occurrence of certain material events (including notices of defaults, rating downgrades, events of taxability, etc.). Continuing disclosures also are available for free from the EMMA continuing disclosure service.

This relationship can be demonstrated mathematically, as follows:

A municipal bond that pays 6.2% therefore generates equal interest income after taxes as a corporate bond that pays 10% (assuming all else is equal).

All investors facing a marginal rate greater than t are better off investing in the municipal bond than in the corporate bond.

Alternatively, one can calculate the taxable equivalent yield of a municipal bond and compare it to the yield of a corporate bond as follows:

Some municipal bonds are insured by monoline insurers that take on the credit risk of these bonds for a small fee.

The Revenue Act of 1913 first codified exemption of interest on municipal bonds from federal income tax.[10]

The Tax Reform Act of 1986 greatly reduced private activities that may be financed with tax-exempt bond proceeds.[11]