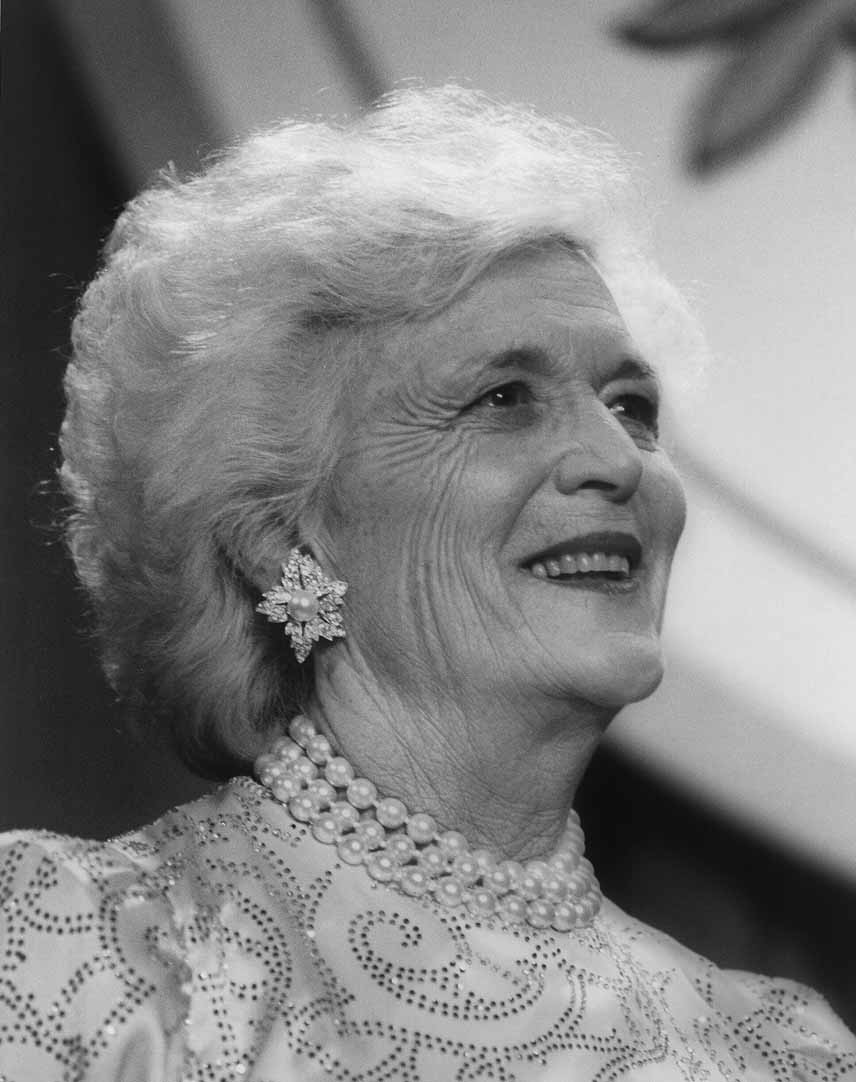 Barbara Pierce Bush (born June 8, 1925) is the wife of the 41st , and was First Lady of the United States from 1989 to 1993. Preceding that, she was the 33rd from 1981 to 1989 while her husband was Vice President to . She is the mother of U.S. President and former Governor . As wife of the Vice President and then President, and continuing after leaving Washington, she supported the cause of universal literacy.

Barbara Pierce was the third child of the former (1896&ndash;1949) and her husband, (1893&ndash;1969), who later became president of McCall Corporation, the publisher of the popular women's magazines "" and "". Her ancestor Thomas Pierce, an early colonist, was also an ancestor of , the 14th president of the United States. She is a direct descendant, great-great-granddaughter, of James Pierce, Jr. who was a fourth cousin of President Pierce. [ [http://www.merrill.org/genealogy/newsletters/200001/6-1barbaracx.html Correction Barbara Pierce Bush Genealogy ] ]

Barbara was born at in Flushing, Queens in , and raised in the an town of Rye, New York. Her mother was killed in a car accident in September 1949.

Barbara attended from 1931 to 1937 and later boarding school at in Charleston, (from 1940 to 1943). She was athletic as a youth and enjoyed swimming, tennis, and bike-riding. Her interest in reading began early in her life; she recalls gathering with her family during the evenings and reading together.

She met George Herbert Walker "Poppy" Bush, a student at in Andover, , at age sixteen during a dance over Christmas vacation. [Bush, Barbara (1994), p. 16] One and a half years later, the two became engaged to be married, just before he went off to as a Navy torpedo bomber pilot. He named three of his planes after her: "Barbara," "Barbara II", and "Barbara III". When he returned on leave, she had dropped out of in Northampton, . Two weeks later, on January 6, 1945, they married. He graduated from following the end of the war; they soon moved to Midland, .

During that time, George H. W. Bush built a business in the oil industry, where he founded . The Bush family moved 30 times over the years. Barbara raised her children while her husband, who served in a variety of government jobs, was usually away.

The First Lady of the United States

Barbara Bush's cause as First Lady was literacy, as it was when she was Second Lady, calling it "the most important issue we have".

Bush was known for her affection for her pet Millie and wrote a child's book about Millie's new litter of puppies. Barbara Bush became the first U.S. First Lady to become a recipient of the , receiving $36,000, most of which she gave to favorite charities.

Since leaving the White House, she and her husband reside in and at the in .

Bush was initiated into women's fraternity as an alumna honor initiate and also was initiated into the Texas Eta chapter () of women's fraternity in 2002 as an alumna honor initiate. [ [http://aggiepiphi.com/Internal.aspx?page=History#famous Famous Pi Phis, Texas Eta web site] ] Even before her initiation, she served as honorary chairperson of the fraternity's literacy philanthropy.Fact|date=April 2008

She serves on the Boards of AmeriCares and the , and heads the Barbara Bush Foundation for Family Literacy. In 2006, it was revealed that Barbara Bush donated an undisclosed amount of money to the Bush&ndash;Clinton Katrina Fund on the condition the charity do business with an educational software company owned by her son . [ [http://chron.com/disp/story.mpl/headline/metro/3742329.html Katrina funds earmarked to pay for Neil Bush's software program | Chron.com - Houston Chronicle] ]

Barbara Bush has a reputation for being outspoken in comments she has made to the press. [ [http://www.kansaspress.ku.edu/gutbar.html Barbara Bush: Presidential Matriarch] ]

During her husband's 1992 presidential campaign, Barbara Bush stated that abortion is a personal matter and argued that the Republican Party platform should not take a stand on it, saying that "The personal things should be left out of, in my opinion, platforms and conventions." Her personal views on abortion were not known, although her friends reported at that time that she "privately supported abortion rights". [cite news | author=Alessandra Stanley | url=http://query.nytimes.com/gst/fullpage.html?res=9E0CE1DD133DF937A2575BC0A964958260&sec=&spon=&pagewanted=all | title= THE 1992 CAMPAIGN: Barbara Bush; First Lady on Abortion: Not a Platform Issue | publisher= (paid access)| date=1992-08-14 | accessdate=2008-08-25]

On March 18, 2003, two days before the beginning of the war on Iraq, ABC's asked her about her family's television viewing habits; she replied:::I watch none. He [former President Bush] sits and listens and I read books, because I know perfectly well that, don't take offense, that 90 percent of what I hear on television is supposition, when we're talking about the news. And he's not, not as understanding of my pettiness about that. But why should we hear about body bags and deaths, and how many, what day it's gonna happen, and how many this or that or what do you suppose? Or, I mean, it's not relevant. So, why should I waste my beautiful mind on something like that, and watch him suffer. [ [http://www.snopes.com/politics/quotes/barbara.asp Urban Legends Reference Pages: Barbara Bush 'Beautiful Mind' Quote] ]

While visiting a Houston relief center for people displaced by , Bush told the radio program Marketplace,

::"Almost everyone I've talked to says, 'We're gonna move to Houston.' What I'm hearing, which is sort of scary, is they all want to stay in Texas... Everybody is so overwhelmed by the hospitality, and so many of the people in the arenas here, you know, were underprivileged anyway. This is working very well for them". [cite news
url=http://www.editorandpublisher.com/eandp/news/article_display.jsp?vnu_content_id=1001054719
title=Barbara Bush: Things Working Out 'Very Well' for Poor Evacuees from New Orleans
publisher= |date=September 5, 2005 | accessdate=2007-04-18] [cite news
url=http://www.publicradio.org/tools/media/player/marketplace/2005/09/05_mpp?start=00:00:02:02.5&end=00:00:02:11.8
title=Marketplace |date=September 5, 2005 |publisher= Audio clip.]

* [http://www.whitehouse.gov/history/firstladies/bb41.html White House biography]
* [http://www.dadashopping.net/work.php?code=behind_every_great_man_stands_a_great_woman Paper defining the role of the first lady] , including a comparison between Barbara Bush and Hillary Clinton