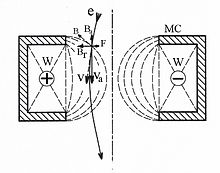 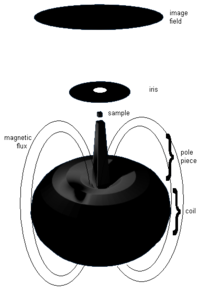 Magnetic lens in the Maier-Leibnitz-Laboratorium

A magnetic lens is a device for the focusing[disambiguation needed

] or deflection of charged particles, such as electrons or ions. Charged particles are deflected based upon the strength of the magnetic field, which can be varied by controlling the current flowing through several electromagnets. These typically find diverse applications, from cathode ray tubes to electron microscopy.