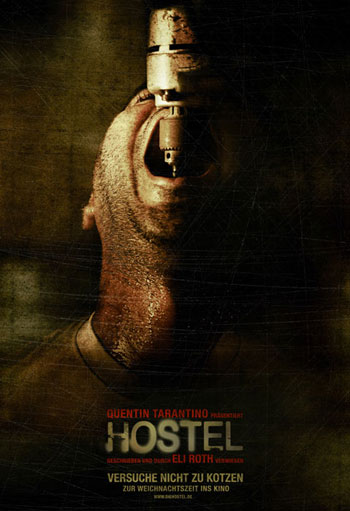 "Hostel" is a 2005 written and directed by , starring , , , Eythor Gudjonsson and . The movie is rated "R" in the United States for its scenes of torture and violence, strong sexual content, language, and drug use. Due to the graphic nature of this film, its showing has been restricted in certain countries, primarily those with strict policies. The sequel, "", was released on , .

In , American backpackers Paxton () and Josh () and Icelandic Óli () meet Alexei (Lubomir Bukovy), a n man who tells them about a Slovak hostel filled with American-loving local women. The backpackers board a train to , where they meet a Dutch businessman (Jan Vlasák) long enough to be unnerved by his bizarre behavior. Upon arriving in the small village, the backpackers check into the local hostel and find themselves sharing a room with Natalya () and Svetlana (Jana Kadeřábková), two attractive, single women who entice the backpackers to a and a before sleeping with them.

The next morning, Óli is missing. A young Japanese backpacker named Kana () also reports that her friend Yuki () has disappeared. A MMS photo sent from Yuki's phone shows Yuki and Óli beneath a smokestack of an abandoned factory, with the word "Sayonara" written beneath it. Unbeknownst to Josh and Paxton, Oli has been decapitated and Yuki tortured, and (presumably) killed. Paxton and Josh decide to leave with Kana the following day. They spot a man wearing Oli's jacket at a museum of medieval torture relics. Paxton later notices that in the MMS photo of Oli, Yuki and the smokestack is faked. Later that night, while partying with Natalya and Svetlana, Paxton and Josh succumb to the effects of alcohol. Josh stumbles back to the hostel while Paxton passes out in the disco's storage room.

Hours later, Josh wakes up handcuffed to a chair in a -like room surrounded by power tools and weapons. The Dutch businessman enters in a leather apron and gloves and begins torturing Josh drilling him in his pecs (just above his ). After he is done, the Dutch Business man sits down and talks to Josh, explaining his unfulfilled dreams of being a surgeon. Josh begs to be released, the businessman then cuts Josh's and allows him to crawl towards the door before finally murdering him.

Across town, Paxton awakens and returns to the hostel to find both Josh and Kana missing. In his room are a different pair of beautiful women inviting him to a spa, eerily similar to Natalya's and Svetlana's offer from before. When the local police chief () proves unhelpful, Paxton locates Natalya and Svetlana and demands to be taken to an "art show" where he thinks his friends are. They drive to a factory on the outskirts of the town where inside, Paxton sees the Dutch businessman cutting up Josh's dead body. He screams at Natalya, who laughs at him, and he is then ambushed by thugs who drag him past cells filled with other backpackers being tortured by various clients.

Paxton is taken to his own cell and restrained to a chair, joined minutes later by a German client () who tortures him. Distracted and insulted by Paxton's ability to plead for his life in German, the client puts a ball-gag in his mouth and tries to kill him with a chainsaw, but before he can begin Paxton starts throwing up, either out of fear or because the gag was choking him. Due to his ball-gag, he starts to choke on his own vomit, and the client quickly removes the ball-gag, probably to stop Paxton dying before he could kill him. He then continues his torture with the chainsaw, but inadvertently saws off Paxton's handcuffs along with his ring and pinky finger before slipping on the ball-gag which he just threw on the floor. This leads to the client dropping the chainsaw and cutting off his own leg.

Paxton breaks free and shoots the client in the head with a gun on the weapon counter. When the guard comes to check on the situation, Paxton shoot and kills him before escaping dressed in torture gear. He hides in a nearby room to avoid capture from other guards, where he finds a collection of victims, and hides under a pile of body parts before being taken to a room where he sees dead bodies being chopped up by a butcher for cremation. Paxton kills the butcher with a hammer, and escapes to the surface where he then peers outside to see police officers conspiring with the factory men.

Paxton dresses himself in the clothes of a client, pulling a glove over his mutilated hand, and discovers a business card for Elite Hunting, now revealed as a secret, worldwide, murder-for-profit organization that charges ascending rates for Slovakians, Europeans, and most of all for Americans. An American businessman (cameo appearance by ) arrives and believing Paxton to be another client, discusses his intended victim and asks Paxton whether to kill her quickly or slowly. Paxton advises administering a quick death, but the American businessman disagrees and decides to resort to torturing, leaving behind a no longer needed firearm before exiting. Paxton steals the firearm and escapes to the courtyard when he hears a woman scream. Unable to ignore it, he returns to the factory and kills the unsuspecting American, now in the middle of burning Kana's face with a blowtorch.

Paxton and Kana flee the factory in a stolen car and head to the railway station, spotting Alexei, Natalya, and Svetlana on their way from the original hostel. Paxton subsequently runs them over in an act of revenge and to prevent them from informing Elite Hunting of his escape. He later runs into the gang of kids and notices that he is in the same car that he was driven in to the "art show", which has a bag of candy in it. The gang then kills the people chasing Paxton, having been bribed with the bag of candy. At the railway station, Kana notices the disfigured reflection of her missing eye, and, unable to live with her hideous scars, throws herself into the path of an incoming train, distracting the guards and allowing Paxton to escape aboard another train.

Once aboard, Paxton hears the familiar voice of Josh's torturer, the Dutch businessman. Paxton then plots revenge against the Dutch businessman to avenge the deaths of Josh and his other friends. As the train stops in Vienna, , Paxton follows him to a public restroom and throws the Elite Hunting's card under his stall. When the Dutch businessman reaches down to pick it up, Paxton grabs his hand and, using a scalpel, cuts off the same fingers he lost during his escape. He then breaks in the stall and nearly drowns the Dutch businessman in the toilet bowl, allowing time for him to recognize Paxton, before slitting his throat, killing him. Paxton then leaves to board another train out of Austria.

The film was billed as "inspired by true events"; Eli Roth claimed to have read about poverty stricken individuals in who would sell "members of their family to , then American and European businessmen would pay $10,000 to walk in a room and shoot them in the head." [ [http://www.timeout.com/film/news/1007.html 'Hostel' - Eli Roth Q&A - News - Film - Time Out London ] ]

Despite the fact that most of the movie is set in a small fictional location near , , actually not a single sequence was shot in Slovakia. The filming locations were at the , in , . In addition to the lower costs of filming in the Czech Republic, has well-equipped sound stages, making it a popular choice for US productions set in . 95% of the film was shot on location in and around Prague, and the stage was only used for the main torture rooms.

The film's opening weekend North American box office gross was $19.5 million, making it the top grossing film that weekend. It went on to gross a total of $47.2 million in the U.S. The film's budget was around $4.5 million, [ [http://imdb.com/title/tt0450278/business Hostel (2005) - Box office / business ] ] and the film went on to gross over $80 million dollars at the box office worldwide, making it one of the most profitable horror hits of all time.

The film received mixed reviews from critics. On the review aggregator , 58% of critics gave the film positive reviews, based on 96 reviews. [cite web|url=http://www.rottentomatoes.com/m/hostel/ |title=Hostel - Movie Reviews, Trailers, Pictures - Rotten Tomatoes |accessdate=2008-02-08 |publisher=] On , the film had an average score of 55 out of 100, based on 21 reviews. [cite web|url=http://www.metacritic.com/film/titles/hostel |title=Hostel (2006): Reviews |accessdate=2008-02-08 |publisher=]

Some of the Slovak public and their government attacked the film for its violence, while Roth defended it as a commentary on Americans' reluctance to travel far from home and ignorance of other cultures.

The film's release was accompanied by strong complaints from the country of , and also from the Fact|date=September 2008 . Slovak officials were disgusted by the film's portrayal of their country as an undeveloped, poor and uncultured land suffering from high criminality, and [cite news|url=http://www.radio.cz/en/issue/76244|title=Smash hit horror Hostel causes a stir among citizens of sleepy Slovakia|last=Cameron|first=Rob|date= 2006|publisher=|accessdate=2008-09-07] , fearing that it would "damage the good reputation of Slovakia" and make foreigners feel that it was a dangerous place to be. The tourist board of Slovakia invited Roth on an all-expense paid trip to their country so he could see that it's not made up of run down factories and kids who kill for bubble gum. Tomas Galbavy, a Slovak Member of Parliament, commented: "I am offended by this film. I think that all Slovaks should feel offended."

Defending himself, Roth said that the film was not meant to be offensive, arguing that "Americans do not even know that this country exists. My film is not a geographical work but aims to show Americans' ignorance of the world around them." To many viewers, "Hostel" appears to be misplaced, both culturally and geographically. Roth said he did this intentionally, meaning to show American stereotypes of Eastern Europe, while the Americans in the film are portrayed accurately. [ [http://www.sonypictures.com/homevideo/hostel/blog/archives/2006/04/ Hostel: April 2006 Archives ] ] Roth has repeatedly argued that despite the many films in the "Texas Chainsaw Massacre" series, people still go to Texas. [ [http://www.close-upfilm.com/features/Featuresarchive/eliroth.htm Close-Up Film Features ] ] [ [http://www.reallyscary.com/interview.asp Really Scary Interviews Eli Roth ] ]