Charlie and Lola are characters created by author Lauren Child. The siblings were originally introduced in a series of books that were later made into a television series. Despite being primarily aimed at children aged 3–7, the books and shows are popular with adults, due to humorous and relatable storylines. Lola is an energetic, imaginative little girl; Charlie is a patient and kind older brother who cut his work out (and is always willing) to help Lola learn and grow.

The first "Charlie and Lola" book, I Will Not Ever Never Eat a Tomato, published in 2001, won the prestigious Kate Greenaway Medal. The character of Lola was based on an inquisitive little girl whom Child encountered on a train in Denmark. Charlie and Lola's parents, as well as their friends' parents, are often mentioned, but never seen. 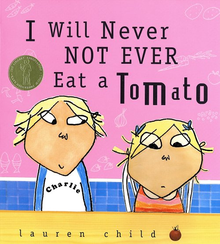 I Will Never Not Ever Eat a Tomato (US title)

Spin-off books based on scripts and animation from the series:

There are also various colouring books and a magazine in the UK.

The "Charlie and Lola" books have been translated into Welsh under the name Cai a Lois and into many other languages.

For the first book "I Will Not Ever Never Eat A Tomato", Lauren Child said:

Charlie has the distinctive tapered, vaguely heart-shaped head distinctive of many of Child's creations, shared by all other characters in the series. Around four feet tall, he has blond hair and black eyes. All of his T-shirts have his name on them. Charlie is often seen either wearing a blue-and-white t-shirt, a red-and-orange t-shirt, a green-and-white t-shirt, or an orange-and-white t-shirt, and with his bare feet poking out of turned-up jeans. He is voiced by Jethro-Laundie Brown in the first series, Daniel Mayers in the second series and Oriel Agranoff in the third series. He is 7 years old.

Lola is with lighter blonde hair, but the same black eyes; she is about two-thirds of Charlie's height, and wears various skirts, tights, and shoes. She is voiced by Maisie Cowell in the first series, by her little sister Clementine Cowell in the second series and Holly Callaway in the third series. She is 4 years old.

Charlie's best friend, Marv has a younger brother named Morten and an older brother called Marty. Marv lives in the same apartment complex as Charlie, Lola and Arnold. Marv has a dog called "Sizzles" and it's a hot-dog dog. In the CDs, Marv is voiced by Ryan Harris.

Lola's best friend. She has black, curly hair and wears two blue bobbles. Lola and Lotta are best friends and love to play together, and visit each other. They do many activities together like dressing up. Voiced by Morgan Gayle.

Marty; he is Marv's older brother. Marty is only featured in some of the books, and he does not throw anything away. Marty does not like Marv, Charlie, Lola or Lotta. His voice actor is unknown and his name is not shown in the credits. His voice is heard in the episode Look After Your Planet. He said "Get out of my room!"

Mini Reader; she is a classmate of Lola and Lotta. Voiced by Katie Hedges.

Morten; he is Marv's younger brother. Morten is only featured on some of the books, and he is shy and quiet. In one book he plays a game with Lola called Round and Round and he enjoys it, but Lola does not.

Arnold; he is one of Lola's friend. Arnold is only featured in some of the books and episodes, and in one he stops being friends with Lola, after Arnold won't share his ice cream with Lola when she drops hers, but then Arnold and Lola are able to build their friendship back up.

Sizzles - Marv's dog. Sizzles is a dachshund. He appears in most episodes. In We (Do Promise) Honestly (We Can) Look After Your Dog, Lola and Lotta try their best to care for Sizzles, who is not pleased. They pull the lead off and Sizzles runs behind a tree, where an identical dog appears, who belongs to another boy. He is brought to school by Marv at the Bring A Pet To School Day in I Will Not Ever Never Forget You Nibbles.

Nibbles - Charlie and Lola's short-lived mouse(appearance in 'I Will Not Ever Never Forget You Nibbles'). After Nibbles died, Charlie and Lola got a new mouse named Tickles.

The books have been adapted by Tiger Aspect into a cartoon series, using a collage style of animation which accurately captures the style of the original books. 2D cel animation, paper cutout, fabric design, real textures, photomontage, and archive footage are all employed and subsequently animated in a software application called CelAction.[1] The cartoons are also notable for their use of children's voices, rather than adult voice actors, a technique pioneered by the Peanuts television specials.

The first series of 26 episodes (11 minutes each) was first broadcast on 7 November 2005. .[2] The second series of 26 episodes (again, 11 minutes each) started broadcasting on Cbeebies on 2 October 2006 (with the morning broadcast also being shown on BBC Two) a third series followed. In the television series, Charlie is seven and Lola is four, and goes to school (her teacher is called Mrs. Hansen). In episodes of both the first and second series, Charlie celebrates his birthday (in "It's a Secret..." and "This Is Actually My Party"), although this doesn't seem to affect his age in other episodes. The third series, a final 26-episode run, was broadcast in the UK and the US in the 2007-2008 television season. With two special episodes broadcast in 2006 and 2007, a total of 80 episodes were produced.[3]

The Charlie and Lola Album

Charlie and Lola's Favourite and Best Music Record was released on 19 March 2007, aimed at parents as well as children. The music is largely a development of existing interstitial and theme music taken from series 1 and 2. There are elements of easy listening, lounge, big band jazz, reggae, bluegrass, eastern European, sci-fi, Latin, classical and film music. There are 17 tracks plus one hidden track, with the programme's theme tune opening and closing the album.

Each track includes spoken word extracts from the series. In many cases, these are manipulated to fit with the musical accompaniment.

"The Bestest in the Barn" was released as a single on 12 March 2007. It features Lola and Lotta teaching various animals on their farm how to sing, dance and play music. This is the only track on the album which does not appear in any episode. Lola and Lotta do however appear as farmers in "I Do Not Ever Never Want My Wobbly Tooth To Fall Out". They also have a tendency to imagine that animals are capable of developing impressive human skills, as seen in "We Do Promise Honestly We Can Look After Your Dog" and "I Will Not Ever Never Forget You Nibbles".

The album is a collaboration between various composers and musicians who write and perform for the TV series. Much of the music is programmed but many tracks feature performances by musicians from London based bands – Menlo Park, Polar Bear and Acoustic Ladyland.

All other tracks written by John Greswell and produced by Greswell / Taylor for MPM London Ltd.