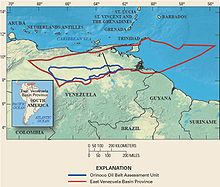 The proven oil reserves in Venezuela are claimed to be the largest in the world, according to an announcement in early 2011 by President Hugo Chavez and the Venezuelan government. The reported proven reserves reach 297 billion barrels (4.72×1010 m3), surpassing that of the previous long-term world leader, Saudi Arabia.[1] OPEC said that Saudi Arabia's reserves stood at 265 billion barrels (4.21×1010 m3) in 2009.[2]

According to the United States Geological Survey (a bureau of the United States Department of the Interior that employs approximately 8,670 people), the Orinoco Belt alone is estimated to contain 900–1,400 billion barrels (2.2×1011 m3) of heavy crude in proven and unproven deposits.[3] Of this, the United States Geological Survey estimated that 380–652 billion barrels (1.037×1011 m3) could be technically recoverable, which would make Venezuela's total recoverable reserves (proven and unproven) among the largest in the world.[4][5] The technology needed to recover ultra-heavy crude oil, such as in most of the Orinoco Belt, may be much more complex and expensive than that of Saudi Arabia's light oil industry.[1] 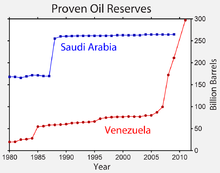 Venezuela's development of its oil reserves has been affected by political unrest in recent years. In late 2002 nearly half of the workers at the state oil company PDVSA went on strike, after which the company fired 18,000 of them. The crude oil that Venezuela has is very heavy by international standards, and as a result much of it must be processed by specialized domestic and international refineries. Venezuela continues to be one of the largest suppliers of oil to the United States, sending about 1.4 million barrels per day (220×10^3 m3/d) to the U.S. Venezuela is also a major oil refiner and the owner of the Citgo gasoline chain.[11]