Fairford Leys is a new high density housing estate of 1,900 homes west of Aylesbury in Buckinghamshire, England. It has its own village centre with a number of traditionally fronted shops, a small supermarket, two restaurants, a nursery, an ecumenical church and a community centre. It also has a Health Club with swimming pool which was opened in October 2003. The civil parish for Fairford Leys is Coldharbour which is in Aylesbury Vale district.

The intention in planning the estate was to create an environment similar to that of a village, with architecture inspired by traditional Aylesbury housing styles and pastiche Victorian lamp posts and railings. The centre of the village is surrounded by the "city wall", a concept originating from the masterplanner John Simpson and inspired by mediaeval city walls, such as York. This consists of three and four storey townhouses and the main entrance to the centre is marked by two towers, loosely modelled on mediaeval gate towers.

The centre contains a higher density of housing, with larger detached properties at the edge of the village. The design includes plenty of play areas, open spaces, playing fields and a golf course.

The development is planned around a masterplan and design code which were drawn up by John Simpson & Partners Architects, to maintain the general appearance of the development. The design codes are enforced by the landowner through private covenants with individual householders, and contain restrictions on alterations to properties. Although these are time limited in part. Fairford Leys is one of the first two developments in the UK to be planned around a design code, the other being Poundbury in Dorchester.

The estate is built on land previously owned by the Ernest Cook Trust — a nationally operated, charitable foundation with interests in land ownership, conservation, architecture, design and community development. To ensure that these concerns are reflected in the achievement of Fairford Leys, the Trust has worked with Aylesbury Vale District Council for over 14 years — largely through its masterplanner, the well-known architect John Simpson — and with the builders Taylor Woodrow, Bellway and George Wimpey Homes. Although Aylesbury Vale District Council ultimately granted planning permission for the development, they took a "back seat" role in the design and planning of the village; the driving force behind which is the Ernest Cook Trust.

Fairford Leys contains housing from single-bedroom starter homes to five-bedroom detached properties, which has ensured that its population is representative of multiple life stages, from young singles, through young and growing families, to the retired and the elderly. The hope that people would want to stay in Fairford Leys, moving house within the village as their family needs change, is already being realised in some cases. 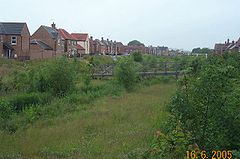 The Bear Brook through Fairford Leys

Some residents work locally, while many others commute, and some of those that are around during the day have found time to develop such initiatives as the Mother and Toddler Group and the Friendship Club, which may play a significant role in helping to build a good sense of community.

St Mary's Church of England School is a mixed, voluntary controlled, primary school, which has about 320 pupils from the ages of four to 11. It was purpose built for the Fairford Leys village but the education authority (Bucks County Council) underestimated the number of children that would live within the village. Consequently, a number of children living within Fairford Leys cannot get a place.[2] In 2009, Buckinghamshire County Council estimate that up to 44 children will not be able to take up a place.

The village centre was officially opened in November 2004.

Fairford Leys is served by a popular and frequent bus service, the Silver Rider. It commenced in 2004 and runs directly to Aylesbury town centre in around 15 minutes, designed to run at times to suit commuter travel from Aylesbury Station to London.