Quilmes Atlético Club is a sports clubs of Argentina, based on the Partido de Quilmes, Buenos Aires Province. Quilmes is one of the oldest clubs of Argentina, having been founded in 1887. Its football squad currently plays in the Primera B Nacional Division.

The institution was founded in 1887 by J. T. Stevenson in Quilmes under the name of Quilmes Rovers Club with an entire football team completely formed by British immigrants. In 1900 the club was renamed to Quilmes Athletic Club.

The club turned to its current name in 1950, because President Juan Perón wanted to change it to a Spanish form.[citation needed]

Quilmes won the 2nd division championship on five occasions, the first in 1949 and the most recent in 1990–91. The squad also participated in 3 Copa Libertadores tournaments, first time in 1979 after obtaining Metropolitano 1978 championship. Quilmes qualified again in 1982 after finishing in second place in the league.

After gaining promotion to the Primera División in 2002–03 Quilmes finished in 5th place in 2003–04 qualifying for a continental competition (Copa Libertadores 2005) again.

Quilmes most known nickname is El Cervecero (The Brewers) because of the Cerveza Quilmes brewery of the same city (which also is the main sponsor of the club).

Quilmes started building a new stadium in 1987 to inaugurate it first in 1993, and then officially in 1995. It was extended in 1998 to its current capacity. The old stadium of Guido and Sarmiento junction was later demolished. 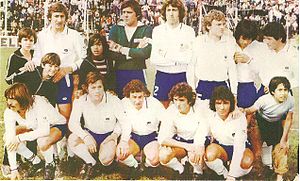 The sports club has its installations in Quilmes with activities that include tennis, basketball, volleyball, and most notably field hockey, with a field hockey stadium (Estadio Nacional de Hockey) with 6,000 seats, and whose successful female and male professional teams have won 17 and 13 first division championships respectively.