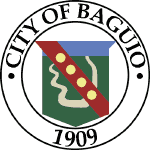 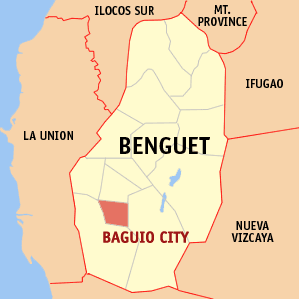 The City of Baguio (Ilokano: "Ciudad ti Baguio"; Filipino: "Lungsod ng Baguio") is a highly urbanized city in northern in the . Baguio City was established by Americans in 1900 at the site of an Ibaloi village known as Kafagway. Baguio City was designated by the as the Summer Capital of the Philippines on , and incorporated as a city by the on . There is a presidential mansion, as well as supreme court and legislative offices in Baguio. Baguio is the seat of government of the . The name of the city is derived from the word "bagiw" in Ibaloi, the indigenous language of the Benguet Region, meaning 'moss'. The city is at an altitude of approximately 1500 meters (5100 ft) in a moist tropical pine forest conducive to the growth of mossy plants and orchids. According to the 2000 census, it has a population of 252,386 in 52,302 households.

The three main access roads leading to Baguio from the lowlands are , , and . Kennon Road starts from and winds through a narrow, steep valley. This is the fastest route to Baguio but is dangerous, with landslides during the rainy season. Marcos Highway, which starts from , and Naguilian Highway, which starts from , are longer routes but are safer than Kennon Road and are the preferred routes for coaches, buses and lorries. With its charter in 1909, Baguio is not a part of the Benguet province, though geographically speaking it's located in the said province. The city of Baguio is known for its mild climate. It's called the summer capital of the Philippines.

in Baguio is about 20 minutes by car south of the city. Due to its limited length the runway is restricted to small aircraft. This perhaps contributed to the city's declining competitiveness against other medium-sized cities around the country. The airport is only used by propeller-driven aircraft. Currently, flies Sunday, Monday, Wednesday and Friday to and from , a 50 minute flight. Flights to Baguio are scheduled only in the morning, as visibility approaches zero in afternoons when fog starts to form. Currently, it is closed for runway rebuilding.

It takes an average of six hours to travel the 250 km distance between and Baguio by way of . It is about fifteen minutes longer through the and could take three more hours when going through , which is the usual route for travellers from the North. is occasionally blocked by landslides during the rainy season and the same problem occurs on the other two access roads. The route to Baguio through is as scenic as it is dangerous. There is another access to Baguio from in the province of but this is less traveled, the road is not well maintained, and public transportation through this route is not as regular. Another road, Halsema Road (also known as "Mountain Trail") leads north through the mountainous portion of the Cordillera Autonomous Region. It starts at the northern border of Baguio, in the Municipality of La Trinidad (Trinidad Valley).

There are several bus lines linking Baguio with and Central Luzon, and provinces such as , , and those in the Ilocos region. Most transportation companies also offer express and air-conditioned buses at a much higher fare, though some minibuses offer cheaper fares.

Bus services that ply Baguio include , , , , , , ,and , as well as minibuses that come from other provinces.

The economy of Baguio City is centered on its educational institutions, of which it has in excess of seven colleges and universities as well as a plethora of trade and technical schools. Estimates are that these schools comprise at least one hundred thousand students.

Another key source of income for Baguio is its character as the commercial hub in the province of Benguet. Many of the agricultural and mining goods produced in go to Baguio City for processing and central distribution.

The city is also a major retail center for the Cordilleras and Ilocos provinces, with shoppers coming to the city to take advantage of the diversity of competitively priced commercial products on sale, many of which would only be available in Manila. Despite the city's relatively small size, it hosts numerous shopping centers and malls catering to the increasing commercial and tourist activity in Baguio: these include mall, Baguio Center Mall, Cooyeesan Hotel Plaza, Abanao Square, Maharlika Livelihood Center, and Porta Vaga Mall.

Various food and retail businesses run mby local residents proliferate, serving to form what has become a part of Baguio's local cultural landscape. Some of these include the Tiong San chain of department stores and supermarkets, Sunshine Supermarket, Star Cafe, Country Mart, the famous Rose Bowl Restaurant and many others.

The areas of , Harrison Road, Magsaysay Avenue and Abanao Street comprise the trade center of the city. It is in these areas where commercial and business structures abound. First-class cinemas, hotels, restaurants, department stores, and shopping centers are to be found in this area. Shopping at the famous City Market offers one a wide array of locally sourced goods and products: everything from colorful woven fabrics and hand-strung beads to primitive wood carvings, cut flowers, strawberries and "Baguio" vegetables, the latter often denoting vegetable types that do well in the cooler growing climate. (Strawberries and string beans—referred to as 'Baguio beans' across the Philippines—are shipped to major urban markets across the archipelago.)

Baguio is also home to one of the country's most profitable Philippine Economic Zone Authority areas (PEZA), called the Baguio City Economic Zone (BCEZ), located in the southern part of the city between the Camp John Hay leisure resort and the . Firms located in the BCEZ mostly produce and export knitted clothing, transistors, small components for vehicles, electronics and other computer parts. Notable firms include Philippines, MOOG, and . Recently, there has been an influx of in the city with American companies outsourcing their technical support facilities in the country.

Tourism is one of Baguio's main industries. Commonly, overseas visitors pass through Baguio, while Filipinos make it a destination.

Baguio is a . It is the center of education in the entire North Luzon. There are eight major institutions of higher education in Baguio City, one of which is the Northern Luzon campus of the University of the Philippines, which is regarded as the country's premiere institution of higher learning and research.
* (U.P. Baguio) - the of the Philippines, U.P. System's flag-bearer in Northern Luzon, internationally known for its excellent record in ethnic and multidisciplinary research and Studies
* - the national training school for future officers of the
*
*
* (formerly the Baguio Colleges Foundation)
* (formerly Lyceum of Baguio)
* (formerly Pines City Doctors' Hospital School of Nursing and Pines City Educational Center)
*
* (formerly Easter School and first school in the Cordilleras)The languages spoken in Baguio are Kankana-ey, , English, Ilocano, Tagalog, Kapampangan, Chinese and Pangalatot.

Baguio's youth majority in the population has given it a distinct flavor different from those of other cities in the Philippines. Although Baguio City is very modern nowadays, , a so called flower festival, is always being celebrated there at mid February. This shows that the city remains very traditional, in a way.

Like most Philippine cities, Baguio is governed by a Mayor, Vice Mayor, and twelve (12) Councilors. However, being a highly-urbanized city, it is not subject to the jurisdiction of Benguet, the province which it was formerly part of.

The current mayor of Baguio is Reinaldo Bautista Jr. who first assumed office after the suspension of in August 2006. Yaranon's term was clouded in controversy, primarily because of his harsh attacks on previous city officials that initiated the scandalous Uniwide Market Project, Jadewell Parking Systems Project, the now finished 172 million, 274-meter BGH flyover project, and the proposed operation of a Casino inside Camp John Hay. Jadewell Parking System was approved by the city council in 2000 and the then City Mayor Mr. Mauricio Domogan. The parking firm's owners filed administrative charges against Yaranon for his stand against its operation. He was eventually suspended until the end of his term on .

Bautista recently had his "interim/acting" tag removed from his title as he emerged as the winner in the 2007 city mayoral race, beating Yaranon, Vergara, former Councilor Leandro Yangot Jr. and post-People Power mayor and spiritual healer Ramon "Jun" Labo Jr. His running mate, three-term vice mayor and law dean Daniel Fariñas, returned to that post as well after previously serving a term in the City Council.

Baguio City's lone congressional district is currently represented in the House of Representatives of the Philippines by Congressman Mauricio Domogan, who is now in his third successive term. Prior to being elected as congressman in 2001, he served three straight terms as mayor(1992-2001).

The region around Baguio was first settled by the s, primarily the , , and tribes. In nearby La Trinidad, Spaniards established a "commandante" or military garrison, although Kafagway, as Baguio was once known, was barely touched. In 1901 and Filipinos commanded by the Americans in engineering built [http://www.gobaguio.com/files/Pages/articles-kennon.html Kennon Road] , the first road directly connecting Kafagway with the lowlands of Pangasinan. Before this, the only road to Kafagway was . On , Baguio was declared a chartered city. The famous American architect Daniel Burnham, one of the earliest successful modern city planners, laid a meticulous plan for the city. His plan was, nevertheless, realized only to a small extent, primarily due to lack of political will among the leaders who served for the city from the pre-war Baguio to the present. Americans declared Baguio the Summer Capital of the Philippines and The Mansion as the residence of the American governor-general to escape Manila's Summer heat. Americans further developed Baguio, building parks and public structures such as in honor of Governor General , Burnham Park in honor of Baguio city planner , , , .

Baguio is well known as site of the surrender of General Tomoyuki Yamashita and Vice Admiral Okochi. It is where they gave up the entire Imperial Japanese Armed Forces to American authorities at the High Commissioner's Residence in on , marking the end of .

With Philippine independence in 1946, Americans settled in the city and English became the primary "lingua franca". Ilocanos joined the Cordillerans in Baguio, and the population of Americans, Dutch, Belgians, and Germans soared.

A large earthquake destroyed most of Baguio on , . Thecity was quickly rebuilt, thanks to the aid of national government and various international donors like Japan and other nations.

Around May 2003, a petition initiated by Dion Fernandez to declare Baguio a was circulated on the Internet and national print media, gaining more than 10,000 signatures. The petition calls upon unspecified officials to create the Zone prior to the Baguio centennial in 2009. In May 2005, the Heritage Conservation Society submitted to the Baguio City Council a proposed Special Heritage Bill drafted by HCS Trustee Ivan Henares. It has been approved on second reading but is being opposed by a group of businessmen.

* , for whom Leonard Wood Road was named
* F. B. Harrison, the most beloved American governor-general in the Philippines, for whom Harrison Road was named [http://www.zum.de/whkmla/region/seasia/phil18981916.html]
* Teachers Camp [http://www.teacherscamp-baguio.com/?ThenAndNow]
*
*
*
*