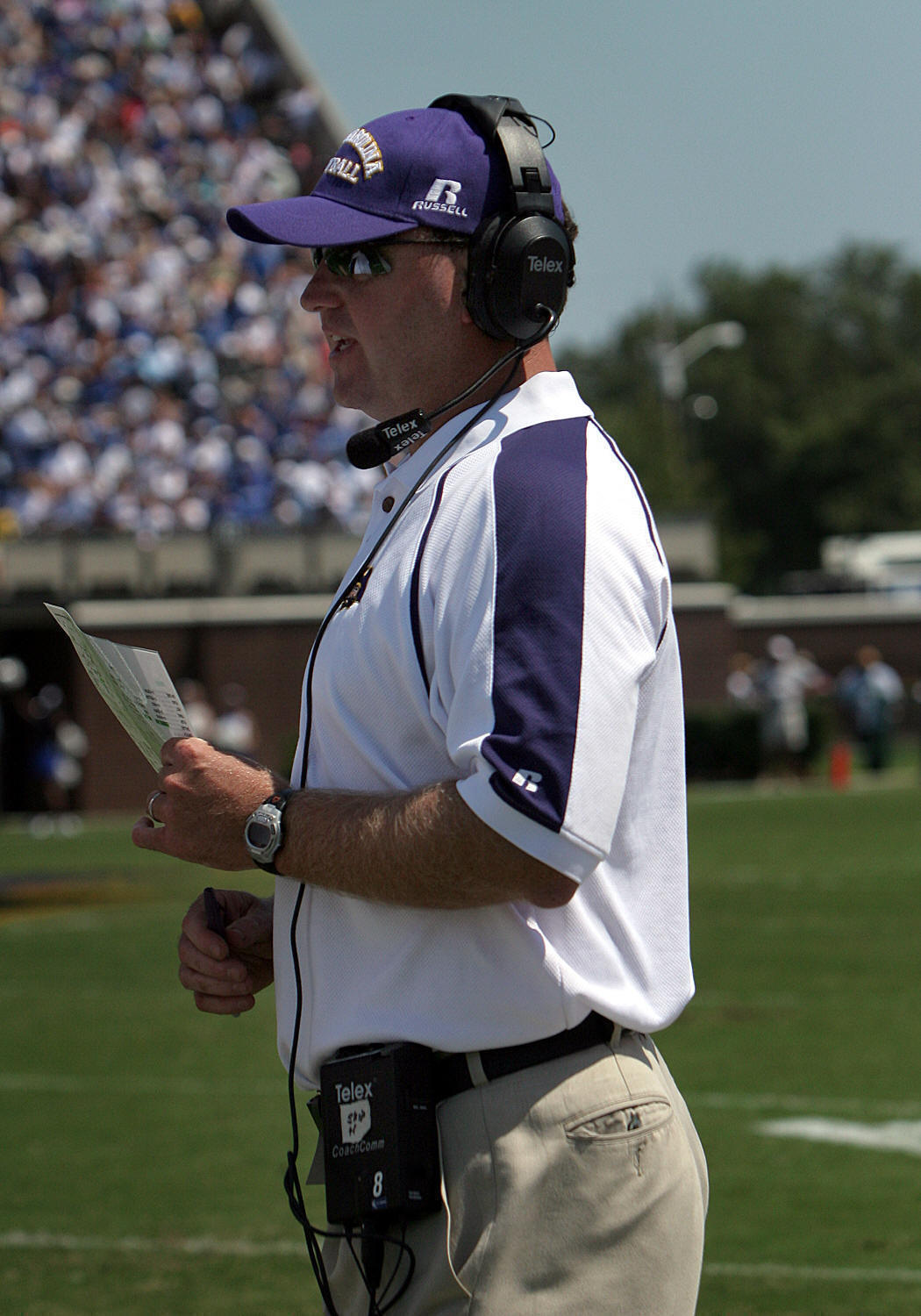 Skip's father, , is an acclaimed former head coach of the Notre Dame Fighting Irish and currently works as a commentator on the television channel . [cite press release| title = New Assignments and Returning Commentators Highlight ABC, ESPN, ESPN2 and ESPNU College Football Coverage| publisher = ESPN| date = 2007-03-12| url = http://www.espnmediazone.com/press_releases/2007_06_jun/20070628_CollegeFootballCommentators.htm| accessdate = 2008-04-11] Due to his father's career as a collegiate football coach, Skip was exposed to football from an early age. At the time of Skip's birth, Lou was a football assistant for the . Skip attended Fayetteville High School in Arkansas, and played on the school's football team as the team's . At the same time, his father was the head coach at the University of Arkansas.

Skip Holtz grew up in many towns while his father coached football. After Skip was born in Connecticut, the Holtz family moved to Columbia, for two years, as his father worked as an assistant coach at the University of South Carolina. In 1968, the family moved to Columbus, after Holtz took a job at The Ohio State University. One year later, the Holtz family moved to Williamsburg, and for Lou's first head coaching position. After two seasons, Lou took a head coaching position with the Wolfpack of . The family lived in Raleigh, for four years until Lou accepted a head coaching job for the 's . The family spent one year in while Lou coached the Jets. After resigning from the Jets, Lou took his family back to the when he accepted the head coaching job in Fayetteville, , at the University of Arkansas in 1977. In Fayetteville, Skip attended Fayetteville High School and graduated in 1983. [cite web| title = Lou Holtz| work = Coach Bio| publisher = BlueAndGold.com| date = 2008| url = http://www.blueandgold.com/coaches/coach.cfm?coachid=25| accessdate = 2008-03-09]

While at high school in Fayetteville, Skip played for the school's football team at the quarterback position, bringing moderate success to the program. As a high school junior, he visited Notre Dame and met with head football coach and head basketball coach . In his final year of high school, Skip was denied admission to Notre Dame due to average grades and his failure to learn a foreign language. Coaches Faust and Phelps encouraged Skip to enroll at nearby Holy Cross College, located adjacent to the university in Notre Dame, . After two years of study at Holy Cross, Skip had improved his grades and transferred to Notre Dame. After his first year, Skip decided he wanted to speak with Coach Faust about walking on to the football team during his senior year. The discussions were cut short, however, as after the 1985 season, Coach Faust resigned. Replacing Faust was Skip's father, Lou, who eagerly accepted his son as a walk-on. Skip began spring practice before the 1986 season as a quarterback, but quickly changed to flanker due to his lack of talent. As a flanker, he earned 54 yards on three s at the Blue-Gold intra-squad game in the spring of 1986. During the fall of 1986, Skip played in all 11 games on special teams. He never caught a pass, but ed once for one yard.

said, "if you can be here in two days, I've got a job for you at Florida State."

Holtz's first job at his was to serve as wide receivers coach, and he filled the position for two years. In 1992, the team began a search for a new . Lou's first choice, Joe Moore, declined. Lou than asked Skip for recommendations to fill the position. Skip initially said he wanted the position, but Lou said, "he couldn't do it at that time with me [Skip] being his son." Skip then mentioned , who was then the offensive coordinator at Florida State. Lou Holtz called Coach Bowden to ask permission to speak to Mark Richt. Coach Bowden said Holtz could hire Richt as long as he could hire Skip. Coach Holtz said, "Well, if I'm just going to switch coaches, I might as well hire Skip." Skip became Notre Dame's offensive coordinator in 1992. Between 1992 and 1994, Skip and his father recorded 40 wins, eight losses, and one tie, an 82.7% winning percentage. Together, they coached Notre Dame to the Cotton Bowl twice, beating Texas A&M both times. Skip had the third-best in the NCAA during the 1991 football season.

On December 4, 1998, The University of South Carolina announced that Lou Holtz would serve as its next head football coach. Lou asked Skip if he would move down to Columbia to become his offensive coordinator—the same position Skip held during his final two years at Notre Dame. Skip accepted the offer, in part due to a desire to live closer to his parents and so his children could spend more time with their grandparents. In 1996, Skip's mother, Beth, was diagnosed with . Two years later, the cancer spread to her liver, lung, adrenal glands, and ovary. Meanwhile, Skip and Lou continued to coach football at South Carolina. As Lou began to struggle as head coach, the question of his eventual successor arose. When Skip was hired in 1998, Lou had included a clause in the hiring contract that Skip would succeed him after he retired. South Carolina Athletic Director rebutted by saying, "There are no formal or informal guarantees for him," and "It's always helpful to have potential succession in a staff." [cite news | title = Skip Holtz To Join His Dad At S.C. | publisher = CBS Sportsline| date = 1998-12-07| url = http://www.cbsnews.com/stories/1998/12/07/archive/main24553.shtml| accessdate = 2008-03-09]

In 2006, Holtz's second season as head coach, ECU won seven games, including victories over inter-state rival , East rival Southern Miss, and ACC foe Virginia. As a reward for their season, the Pirates earned their first bowl game under Holtz's tenure, playing the Bulls of the in the , losing 24&ndash;7. [cite news | last = O'Brien first = Denny| title = Bulls expose holes for ECU| work = The Slants of the Game| publisher = Bonesville.net| date = 2006-12-24| url = http://www.bonesville.net/Articles/DennyOBrien/2006/FB_Games/122406_OBrien.htm| accessdate = 2008-03-09] Despite the bowl loss, the 2006 season was ECU's first winning season since 2000, and the Papajohns.com Bowl was the Pirates' first bowl game since 2001.

The 2008 season was opened with two stunning upsets over ranked opponents. ECU opened the season with a neutral site contest in Charlotte against 17th ranked from the . ECU won the game with a critical late game punt block play. The Tech victory was followed in week 2 with a dominating 24&ndash;3 victory over the 8th ranked team in the country the of the . By week two of the 2008 season Skip led the Pirates to a national ranking of 14th in the country going into conference play.

Holtz has participated in 12 bowl games in his coaching career. Four games occurred while he was head coach and eight when he was an assistant coach. Of the four games where he was the head coach, two occurred in the Football Bowl Subdivision(FBS) (formerly Division I-A) and two occurred in Division I-AA (now known as Football Championship Subdivision). As a FBS head coach, he is currently 1&ndash;1. Each playoff game is treated like a separate bowl game.