Diana and Callisto is a painting of 1556–59 by the Venetian artist Titian. It is currently part of the Bridgewater or Sutherland Loan, on display at the National Gallery of Scotland in Edinburgh, with a later version by Titian and his workshop in the Kunsthistorisches Museum in Vienna. It portrays the moment in which the goddess Diana discovers that her maid Callisto has become pregnant by Jupiter.[1]

It is part of a series of seven famous canvasses, the "poesies", depicting mythological scenes from Ovid's Metamorphoses painted for Philip II of Spain (after Maximilian II, Holy Roman Emperor had declined Titian's offer to paint them for him).[2] The work remained in the Spanish royal collection until 1704, when King Philip V gave it to the French ambassador. It was soon acquired by Philippe II, Duke of Orléans, nephew of Louis XIV, and Regent of France during the minority of Louis XV, for his collection, one of the finest ever assembled. After the French Revolution, the Orleans collection was sold to a Brussels banker by Louis Philippe II, Duke of Orléans in 1791, two years before he was guillotined.[3] It was brought to London for sale in 1793, and bought by a syndicate of three aristcrats, the leader of which, the canal and coal-magnate Francis Egerton, 3rd Duke of Bridgewater, bought a large number of paintings for himself, including this painting, Titian's Diana and Actaeon (from the same mythological series of 7 paintings), eight paintings by Poussin, three Raphaels and Rembrandt's "Self-Portrait, aged 51".[4] 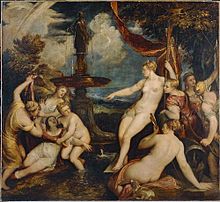 The Vienna version, which has some alterations to some of the figures, although the underdrawing is almost identical to the prime version in Edinburgh.[5]

The third Duke of Bridgewater was probably inspired to buy the paintings by his nephew, Earl Gower, the ancestor of the Dukes of Sutherland. Certainly, on Bridgewater's death five years after the purchase, he bequeathed the Titians and the rest of the collection to Gower, who put it on display to the public in his London house - it has been on public display ever since. On first seeing the collection there, William Hazlitt wrote "I was staggered when I saw the works ... A new sense came upon me, a new heaven and a new Earth stood before me.". On the outbreak of the Second World War in September 1939, the collection was moved from London to Scotland. Since 1945 the Diana and Actaeon and Diana and Callisto (with other paintings from the collection, known collectively as "the Bridgewater loan" or "the Sutherland Loan"[6]) at the National Gallery of Scotland in Edinburgh. As well as Hazlitt, during their time on public display the two Titian paintings have inspired artists such as JMW Turner[7] and Lucian Freud — Freud has described the pair as "simply the most beautiful pictures in the world".[8]

The Sutherland collection has passed by descent to the 7th Duke of Sutherland, most of whose wealth is contained in the paintings collection, but in late August 2008 the 7th Duke announced that he wished to sell some of the collection in order to diversify his assets.[9] He at first offered them as a pair to the British national galleries at £100m (a third of their overall estimated market price) if they could demonstrate by the end of 2008 they were able to raise that sum — if not, the pair or other paintings from the Bridgewater collection would be put on public auction early in 2009. The NGS and the National Gallery in London announced they would combine forces to raise the sum in the form of £50m (or a demonstration that this money can be raised) to purchase Diana and Actaeon paid over three years in instalments and then £50m for Diana and Callisto paid for similarly from 2013.[10][11][12]

Though the campaign received some criticism for the Duke's motives or (from John Tusa and Nigel Carrington of the University of the Arts London) for distracting from funding art students,[13] it gained press support from both the tabloid and broadsheet print media in the UK.[14] In 14 October 2008 the appeal received £1 million from the Art Fund[15] and on 19 November this was followed by £10 million from the National Heritage Memorial Fund.[16]

Speculation began when the original 31 December deadline passed without definite news and the Scottish Government's announcement of a contribution of £17.5 million in January 2009 triggered a political row, with Ian Davidson questioning the deal at a time of economic hardship.[17] There was also controversy over attempts to dilute the guarantee that the duke would sell no other of the paintings from the Sutherland Loan should the two Titians be bought[18] .[19] However, on 2 February 2009 it was announced that, thanks to the deadline being extended to raise more funds and finalise the payment plan for the Diana and Callisto, the £50m had been raised and Diana and Actaeon would be acquired.[20] Penny stated that many who had contributed to the Diana and Actaeon appeal had done so "on the understanding" that Diana and Callisto would also be bought but that raising the second £50m "is not going to be easily raised. We do believe we can do it, and we've given it a great deal of thought. It's not just reckless gambling.".[21] However, on 23 October 2011, the Scottish government announced it would not make a contribution to the Diana and Callisto appeal, referring to its contribution to the Diana and Actaeon appeal by stating that "this government has made its contribution to the campaign" [22].