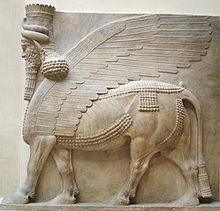 Assyrian Shedu from the entrance to the throne room of the palace of Sargon II at Dur-Sharrukin (late 8th century BC), excavated by Paul-Émile Botta, 1843–1844, now at the Department of Oriental antiquities, Richelieu wing of the Louvre. 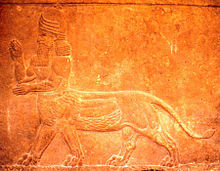 Zeus darting his lightning at Typhon, shown as a hybrid with a human torso, bird's wings and a reptilian lower body (Chalcidian black-figured hydria, ca. 550 BC, Staatliche Antikensammlungen Inv. 596)

Hybrids are mythological creatures combining body parts of more than one real species. They can be classified as partly human hybrids (such as mermaids or centaurs), and non-human hybrids combining two or more animal species (such as the griffin). Hybrids are often zoomorphic deities in origin who acquire an anthropomorphic aspect over time.

Partly human hybrids appear in petroglyphs or cave paintings from the Upper Paleolithic, in shamanistic or totemistic contexts. Ethnologist Ivar Lissner theorized that cave paintings of beings combining human and animal features were not physical representations of mythical hybrids, but were instead attempts to depict shamans in the process of acquiring the mental and spiritual attributes of various beasts or "power animals".[1] Religious historian Mircea Eliade has observed that beliefs regarding animal identity and transformation into animals are widespread.[2] The iconography of the Vinca culture of Neolithic Europe in particular is noted for its frequent depiction of an owl-beaked "bird goddess".[3]

Examples of theriocephaly in the Ancient Egyptian pantheon include jackal-headed Anubis, cobra-headed Amunet, lion-headed Sekhmet (see also Sphinx), falcon-headed Horus etc. Most of these deities also have a purely zoomorphic and a purely anthropomorphic aspect, both of which the hybrid representation seeks to capture at once. The hybrid iconography then develops as an attempt to represent both aspects. Similarly, the Gaulish Artio sculpture found in Berne shows a juxtaposition of a bear and a woman figure, interpreted as representations of the theriomorphic and the anthropomorphic aspect of the same goddess.

Non-human hybrids also appear in Ancient Egyptian iconography, as in Ammit (combining the crocodile, the lion and the hippopotamus). Mythological hybrids become very popular in Luwian and Assyrian art of the Late Bronze Age to Early Iron Age. The "angel" (human with birds' wings, see winged genie) the "mermaid" (part human part fish, see Enki, Atargatis, Apkallu) and the (Shedu) all trace their origins to Assyro-Babylonian art. In Mesopotamian mythology the urmahlullu, or lion-man served as a guardian spirit, especially of bathrooms.[4][5] The Old Babylonian Lilitu demon, particularly as shown in the Burney Relief (part woman part owl) prefigures the harpy/siren motive.

Luwian and Assyrian motives are imitated in Archaic Greece, during the Orientalizing Period (9th to 8th centuries BC), inspiring the monsters of classical Greek mythology such as the Chimera, the Harpy, the Centaur, the Griffin, the Hippocamp, Talos etc.

The motive of the "winged man" appears in the Assyrian winged genie, and is taken up in the Biblical Seraphim and Chayot, the Etruscan Vanth, Hellenistic Eros-Amor, and ultimately the Christian iconography of angels. Assyrian hybrids also entered Persian art, as in the Faravahar or the Buraq.

The motive of otherwise human figures sporting horns may derive from partly goat hybrids (as in Pan and the Devil in Christian iconography) or as partly bull hybrids (Minotaur). The Gundestrup cauldron and the Pashupati figure have stag's antlers (see also Horned God, horned helmet). The Christian representation of Moses with horns, however, is due to a mistranslation of the Hebrew text of Exodus 34:29-35 by Jerome.

The most prominent hybrid in Hindu iconography is elephant-headed Ganesha. Both Nāga and Garuda are non-hybrid mythical animals (snake and bird, respectively) in their early attestations, but become partly human hybrids in later iconography.