The Boy in the Striped Pyjamas (film)

The Boy in the Striped Pyjamas (film)

Infobox Film
name = The Boy in the Striped Pyjamas 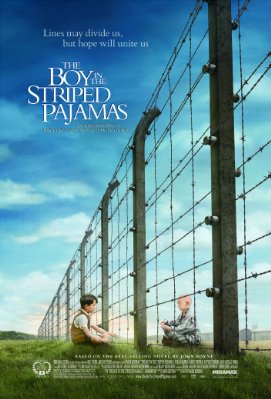 "The Boy in the Striped Pyjamas" is a British-American drama film directed by and produced by , starring , and . It is based on the book of the same name by Irish novelist . It has been reviewed as "One of the most powerful endings ever captured on film".

Bruno is an eight year old boy who leads a very comfortable life in Berlin during the Second World War. His father is a high ranking officer, and things change when the family has to move due to his father’s new post. In his innocence, Bruno sees the nearby concentration camp as a ‘farm’ and wonders why its inhabitants are always wearing striped pyjamas. Eventually Bruno befriends a boy his own age who lives on the other side of the fence.

Bruno (), is the son of the strict commander of a Nazi concentration camp (). He has a strong headed sister, Gretel. They live in a five storey mansion, but are one day suddenly moved to a place called Out-With (). Bruno, outraged by his father's decision to move to Out-With, and desperate to go home, spends his time in his room with no friends. He is also annoyed by the fact that they live in a three story house instead of their old five-story mansion, and with such a small space, there isn't any room for exploration (a hobby of Bruno's) to be done. He also misses sliding down the banister in their old house. From his bedroom window, Bruno spots a fence with people in striped pyjamas behind it. These are the Jews, and they are in a concentration camp, with a couple working in the family home, this is where he first meets Pavel (), a doctor who mends Bruno's cuts when he falls of the swing. One day his parents come to an agreement that both Bruno and Gretel need a tutor for their education so they hire Herr Liszt (Jim Norton). To Bruno, Herr Liszt is the most boring teacher one could ever have - because he teaches history instead of the imaginative literature , which Bruno prefers. So, in boredom and confusion he wonders what is going on at Out-With and why people are always dressed in striped pyjamas there.

Bruno, unaware of the reason behind the War, becomes friends with a Jewish boy, named Shmuel (), who has been put in the camp at the bottom of Bruno's garden. Shmuel's father goes missing (the boys are unaware that he has likely been killed) and Bruno decides to break into the prison camp, disguised as a worker to help him find his father. Shmuel sneaks some 'pyjamas' clothes to his young friend and they dig his way into the camp.

Once inside, the boys are shifted into a chamber where they are eventually killed together. This is juxtaposed with Bruno's mother (), father and sister realising that he has gone missing from the garden. Finding the boy's clothes next to the hole in the fence, Bruno's father tries to find him before it is too late. He runs throughout the camp, eventually discovering a completely empty hut. He comes to the conclusion that Bruno has been brought to the gas chamber, but it is too late. The screams and shouts of the people inside have been silenced. The movie ends with the camera moving slowly away from the door, panning out to reveal the hundreds of striped 'pyjamas' hanging, forgotten like their wearers, outside the door.

The motion picture was shot in , .

The film is currently being shown in cinemas across the United Kingdom, and is receiving fantastic reviews for its educational and moving plot, and for its easy understanding for both adult and child alike. However some reviews have took notice to the 12A certificate, feeling that it may be a little harsh for a young child to watch, but others argue that the film is a cleverly explained piece of education.