Dermatillomania (also known as neurotic excoriation, pathologic skin picking (PSP), compulsive skin picking (CSP) or psychogenic excoriation[1][2]) is an impulse control disorder characterized by the repeated urge to pick at one's own skin, often to the extent that damage is caused. Research has suggested that the urge to pick is similar to an obsessive compulsive disorder but others have argued that for some the condition is more akin to substance abuse disorder. The two main strategies for treating this condition are pharmacological and behavioral intervention.

Dermatillomania is characterized as "scratching, scraping, picking at or squeezing the skin in response to itching or another dermal sensation or in order to dig at a dermal lesion."[3] It is defined as "repetitive and compulsive picking of skin which results in tissue damage."[2]

The inability to control the urge to pick is similar to the urge to compulsively pull one's own hair, i.e., trichotillomania, and other impulse control disorders.

Research has suggested that dermatillomania may be thought of as a type of obsessive compulsive disorder (OCD).[4] Dermatillomania and OCD are similar in that they both involve "repetitive engagement in behaviors with diminished control" and also both generally decrease anxiety.[2]

Odlaug and Grant also argue that dermatillomania could have several different psychological causes, which would explain why some patients seem more likely to have symptoms of OCD, and others, of an addiction. They suggest that treating certain cases of dermatillomania as an addiction may yield more success than treating them as a form of OCD.[2]

The fingers have been compulsively picked and chewed on due to the person suffering from dermatillomania.

Episodes of skin picking are often preceded or accompanied by tension, anxiety, or stress.[4] During these moments, there is commonly a compulsive urge to pick, bite, or scratch at a surface or region of the body, often at the location of a perceived skin defect.

The region most commonly picked is the face,[4][2] but other frequent locations include the arms, legs, back, gums, lips, shoulders, scalp, stomach, chest, and extremities such as the fingernails, cuticles, and toenails.[2] Most patients with dermatillomania report having a primary area of the body that they focus their picking on, but they will often move to other areas of the body to allow their primary picking area to heal.[2] Individuals with dermatillomania vary in their picking behaviour; some do it briefly multiple times a day while others can do one picking session that can last for hours.[5]

Complications arising from dermatillomania include: infection at the site of picking, tissue damage, and septicemia. Damage from picking can be so severe as to require skin grafting. Severe picking can cause epidural abscesses. Severe cases of dermatillomania can cause life threatening injuries. For example, in one reported case a female picked a hole through the bridge of her nose, which required surgery to fix, and a 48-year old female picked through the skin on her neck exposing the carotid artery. Besides physical injuries, dermatillomania can cause severe physical scarring and disfigurement.[2] 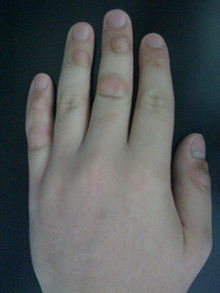 Compulsive picking of the knuckles (via mouth) illustrating disfiguration of the distal and proximal joints of the middle and little fingers.

There have been many different theories regarding the causes of dermatillomania.

In contrast to neurological theories, there are some psychologist that believe that picking behavior is a result of repressed rage felt toward authoritarian parents.[2] A similar theory holds that overbearing parents can cause the behavior to develop in their children.[2]

There is only a limited knowledge regarding the neurobiology that drives dermatillomania, and there have been no neuroimaging studies of patients with dermatillomania.[2]

Studies have shown a linkage between dopamine and the urge to pick. Drugs such as cocaine and methamphetamine that are dopamine agonists, which increase the pharmacological effects of dopamine, have been shown to cause uncontrollable picking in users. These drugs can create the sensation of formication, which feels likes something is crawling on or under the skin.[2] Additionally, drugs such as naltrexone that are dopamine antagonists, which impede the pharmacological effects of dopamine, have shown some benefit in reducing picking behavior. Thus, dermatillomania could result from a dysfunction in the dopamine reward functions.[2]

In many patients dermatillomania begins with the onset of acne in adolescence, but the compulsion continues even after the acne has gone away. In those dermatillomania patients with acne, the grooming of the skin is disproportionate to the severity of the acne.[2]

Certain stressful events including marital conflicts, deaths of friends or family, and unwanted pregnancies have been linked to the onset of the condition.[2]

Dermatillomania is not specifically defined in the fourth edition of the Diagnostic and Statistical Manual of Mental Disorders (DSM IV).[2] The addition has been proposed for the fifth edition of the DSM as a condition where there is an intrusive compulsion to pick at one's skin that cannot be accounted for by another medical condition or mental disorder; where feelings of tension or anxiety precedes picking; where picking causes damage; and where the picking results in immediate pleasure or relief but later causes distress or impairment to the subject. Most of the published literature uses a simplified two-factor definition; i.e., dermatillomania is 1) repetitive picking at the skin that 2) results in significant distress or social or occupational impairment.[2]

Because dermatillomania is different from other conditions and disorders that cause picking of the skin, it is important that any diagnosis of dermatillomania take into account various other medical conditions as possible causes before diagnosing the patient with dermatillomania.[2] There are a variety of conditions that cause itching and skin picking including: eczema, psoriasis, diabetes, liver disease, Hodgkin's disease, polycythemia vera, systemic lupus, and Prader-Willi syndrome.[2]

In order to better understand dermotillomania, researchers have developed a variety of scales to categorize skin-picking behavior. These include the Skin-Picking Impact Scale (SPIS), and The Milwaukee Inventory for the Dimensions of Adult Skin-picking. [5] The SPIS was created to measure how skin picking affects the individual socially, behaviorally, and emotionally.[6]

There are several different classes of pharmacological treatment agents that have some support for treating dermatillomania: (1) SSRIs; (2) opioid antagonists; and (3) glutamatergic agents.[2] In addition to these classes of drugs, some other pharmacological products have been tested in small trials as well.

SSRIs have shown to be effective in the treatment of OCD and this has provided an argument in favor of treating dermatillomania with the same therapy. Unfortunately, the clinical studies have not provided clear support for this, because there have not been large double-blind placebo-controlled trials of SSRI therapy for dermatillomania.[2][5] Review of treatment with SSRIs of dermatillomania have shown that the following may be effective in reducing picking behavior: doxepin, clomipramine, naltrexone, pimozide, and olanzapine.[5] Small studies of fluoxetine, an SSRI, in treating dermatillomania showed that the drug reduced certain aspects of skin picking, as compared to placebo, but full remission was not observed.[2] One small study of patients with dermatillomania treated with citalopram, another SSRI, showed that those that took the drug significantly reduced their scores on the Yale-Brown Obsessive Compulsive Scale compared to placebo, but that there was no significant decrease on the visual-analog scale of picking behavior.[2]

Another class of possible pharmacological treatments are glutamatergic agents such as n-acetyl cysteine (NAC). These products have shown some ability to reduce other problematic behaviors such as cocaine addiction and trichotillomania.[2] Some case studies and some small studies of NAC have shown a decrease in dermatillomania by treatment with NAC, as compared to placebo.[2]

Topiramate, an anti-epileptic drug, has been used to treat dermatillomania; in a small study of individuals with Prader–Willi syndrome, it was found to reduce skin-picking behavior. [5]

Several studies have showed that habit reversal training associated with awareness training reduces skin-picking behavior in those individuals with dermatillomania that do not have psychological disabilities.[5] Habit reversal training can included awareness enhancement and competing response training.[5] For example, in one study the competing response training required participants to make a closed fist for one minute instead of picking or in response to condition that usually provokes picking behavior.[5]

There are several different behavioral interventions that have been tested to treat dermatillomania in the developmentally disabled.

One treatment method is to have individuals wear a form of protective clothing that limits the ability of the patient to pick at his body, e.g., gloves or face mask.[5]

Other behavioral treatments attempt to change behavior through providing different incentives. Under Differential Reinforcement of Other Behavior (DRO), a patient is rewarded if manages to abstain from the picking behavior for a certain amount of time.[5]. In contrast to DRO, Differential Reinforcement of Incompatible Behavior (DRI) rewards an individual for engaging in a alternative behavior that cannot physically occur at the same time as the problem behavior (e.g. sitting on your hands instead of picking at your skin).[5] Lastly, differential reinforcement of alternative behavior rewards behavior that is not necessarily incompatible with the target behavior but serves the same function as the target behavior (e.g., providing people with a competing behavior to occupy their time instead of skin picking).[5]

Another form of behavioral approach is to use punishment. This can either be verbal punishment, by telling the person no when they did the activity, or physical punishment, by making them do arm exercises, or spraying water at them when they engage in picking behavior.[5].

All of these techniques have been reported to have some success in small studies, but none has been tested in large enough population to provide definitive evidence of their effectiveness.[5]

Individuals with dermatillomania find that the disorder interferes with daily life. Plagued by shame, embarrassment, and humiliation, they may take measures to hide their disorder by not leaving home, wearing long sleeves and pants in summer, or covering visible damage to skin with cosmetics and/or bandages. Activities such as typing may be painful for those who pick at their fingers or hands.[citation needed]

The prevalence of dermatillomania is not well understood.[2]

Estimates of prevalence of the condition range from 1.4 to 5.4% in the general population. One U.S. telephone survey found that 16.6% of respondents "picked their skin to the point of noticeable tissue damage" and that 1.4% would qualify as meeting the requirements of dermatillomania. Another community survey found a rate of 5.4% had dermatillomania. A survey of college students found a rate of 4%.[2] One study found that among non-disabled adults, 63% of individuals engaged in some form of skin picking and 5.4% engaged in serious skin picking.[5] Lastly, a survey of dermatology patients found that 2% suffered from dermatillomania.[2]

Dermatillomania generally begins in individuals at one of either two periods: early adolescence or sometime between the ages of 30 to 45. Additionally, many cases of dermatillomania have been documented to begin in children under the age of 10. One small survey of patients with dermatillomania found that 47.5% of them had an early onset of dermatillomania that began before age 10.[2]

Dermatillomania is more common in females than in males.[2][4]

Substance abuse is often present, and individuals with dermatillomania are twice as likely to have first-degree relatives who have substance-abuse disorders (alcohol or drugs) than those without the condition.[2]

The first known mention of dermatillomania in the print can be found in 1898 by the French dermatologist Brocq, describing an adolescent female patient who had uncontrolled picking of acne.[2][7]

Dermatillomania in the media

Dermatillomania has been the subject of several episodes of Obsessed, a television documentary series that focuses on treatment of anxiety disorders.