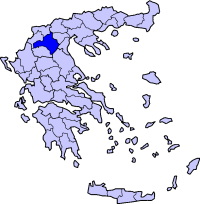 Kozani ( _el. Κοζάνη) is a prefecture in Greece, located in western Macedonia. Its capital is the city of .

Kozani has three provinces: Kozani, and .

Its geography features a small valley that stretches from the northern part of the prefecture down to the River and . The mountains are to the west and east especially the area of Kozani, they include to the west, to the northeast and to the southwest. The northern portion are mined and the western and the eastern portions are forested as well as grassy and barren.

Its climate ranges from continental to mountainous. Kozani has warm to hot summers and cool winters, cooler than Thessaloniki, the mountainous, the western and the eastern portion receives cold winters and features snow. Its sunshine days are days shorter than the south and by the coastline, it is more rainier than the south. Temeperatures ranges from 25 to 30 C during the summer months.

The area of the prefecture were made up of several kingdoms including the ancient , it was later ruled by the and later, the after the , it later became a part of the after the break up into the West and the East, in the early 14th to the 15th century, it was ruled by the and lasted until the of 1913. The modern prefecture was created later on and included the modern Florina, Grevena and the Kastoria prefecture.

Refugees from and during the Greco-Turkish War of 1919 to 1922 brought refugees to the area including Kozani and villages and towns that removed the Turkish population to the country which later became only known as Turkey. The economy boomed and was disrupted later on. After and the , most of the bulildings were repaired. Kozani opened its airport and later its hospital.

In 1996, an earthquake rumbled a part of the prefecture. Between 1998 and 2006, the Via Egnatia was under construction and contains tunnels, it was finally opened after the completion.

The prefecture was affected by a small forest fire that burnt forests in the vicinity of Velventos near Lake Polyfytos, it consumed a part of the area but it was a minor wildfire that lasted hours. An earthquake shook the area south of the city of Kozani on Friday , , it caused only minor damages mainly to older architecture. It measured 4.4 on the Richter scale, a lighter measurement that was to be seen since late-2007 including Methoni and Erymanthos quakes with the exception of the time of the forty earthquakes a few days earlier.

Kozani has been a prosperous area in the course of its history. Its merchants are once known to have dominated the of the Balkan peninsula, expanding their trade activities to the north and along the . Kozani nowadays is still among the most prosperous areas of the Greek province, but for a different reason, its rich . Kozani produces , which is the main source of the electric power produced in Greece, nitrous salts which are processed into s, and . There was also an mine that remained operational until the mid-1990s, which has now ceased its operation. In the prefecture of Kozani there is also the and of , which further contributes to the electricity production of Greece. The region's vast industrial advancement in a short period of time has raised concerns.