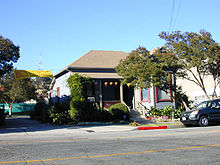 Its mission, as stated on its website, is as follows:

CHSSC is one of the most active historical societies in Southern California. There are monthly meetings, field trips, archive and library collections, oral history projects, scholarships, and publications.

Each year the Chinese Historical Society of Southern California honors Chinese Americans who have made significant contributions to the greater Los Angeles community. They have included: