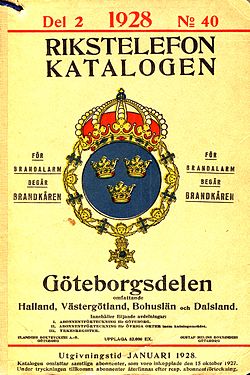 A telephone directory (also called a telephone book, phone book and white/yellow pages) is a listing of telephone subscribers in a geographical area or subscribers to services provided by the organization that publishes the directory. Its purpose is to allow the telephone number of a subscriber identified by name and address to be found.

Subscriber names are generally listed in alphabetical order, together with their postal or street address and telephone number. In principle every subscriber in the geographical coverage area is listed, but subscribers may request the exclusion of their number from the directory, often for a fee; their number is then said to be "unlisted" (American English), "ex-directory" (British English) or "private" (Australia and New Zealand).[citation needed]

A telephone directory may also provide instructions about how to use the telephone service in the local area, may give important numbers for emergency services, utilities, hospitals, doctors and organizations who can provide support in times of crisis. It may also have civil defense or emergency management information. There may be transit maps, postal code guides, or stadium seating charts, as well as advertising.

In the US, under current rules and practices, mobile phone and Voice over IP listings are not included in telephone directories. Efforts to create cellular directories have met stiff opposition from several fronts, including those who seek to avoid telemarketers.[citation needed]

A telephone directory and its content may be known by the color of the paper it is printed on.

Other colors may have other meanings; for example, information on government agencies is often printed on blue or green pages.[citation needed] 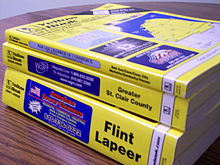 Telephone directories can be published in hard copy or in electronic form. In the latter case, the directory can be provided as an online service through proprietary terminals or over the Internet, or on physical media such as CD-ROM. In many countries directories are both published in book for and also available over the Internet. Printed directories were usually supplied free of charge before online access was available; more recently there is often a charge,[citation needed] although subscribers are not obliged to buy a printed directory.

In France, the Minitel videotex system originated as an attempt by France Télécom to rid itself of its paper publishing costs by renting a Minitel terminal to all telephone users. However, France Télécom continues to give hard copies to its subscribers.

In Switzerland, most pay phones are now accompanied with electronic telephone directory terminals instead of paper directories,[citation needed] and phone users are charged for each search. 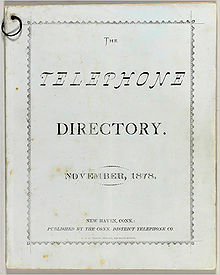 The first telephone directory, consisting of a single piece of cardboard, was issued on February 21, 1878; it listed 50 businesses in New Haven, Connecticut that had a telephone.[2]

The first British telephone directory was published on 15 January 1880 (the year after a public telephone service was introduced into the UK) by The Telephone Company. It contained 248 names and addresses of individuals and businesses in London; telephone numbers were not used at the time as subscribers were asked for by name at the exchange.[3] The directory is preserved as part of the British phone book collection by BT Archives.

The Reuben H. Donnelly company asserts[citation needed] that it published the first classified directory, or yellow pages, for Chicago, Illinois, in 1886.

In 1981 France is the first country to have an Electronic Directory[4] on a prehistoric Internet system called Minitel. The Directory is called "11" after its telephone access number.

In 1991 the U.S. Supreme Court ruled (in Feist v. Rural) that telephone companies do not have a copyright on telephone listings, because copyright protects creativity and not the mere labor of collecting existing information. Within the geographical reach of the Court, the Feist ruling has resulted in the availability of various telephone directory services on CD-ROM and the World Wide Web.[citation needed]

1994 is the year the first Telephone Directories go online in Australia. Yellowpages.com.au is the fist one soon followed by Whitepages.com.au both operated by the Australian Phone company Telstra [5]

Phone books are used in multiple scenes of intimidation and impending death in HBO's popular crime-drama series, The Sopranos: