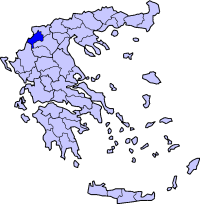 Kastoria Prefecture ( _el. Νομός Καστοριάς) is one of the fifty-one prefectures ("nomoi", singular: "nomos") of . Its capital is the city of , and its population was estimated at 51,934 inhabitants in the most recent census. The prefecture is situated at the western end of Macedonia in the far north of the country. It borders the prefectures of Florina, Grevena, Kozani and Ioannina. An international border with the n district of Korçë lies on the western edge of the prefecture.

The region is mountainous with a pronounced continental climate, characterised by cold winters and hot summers.

The mountain ranges includes and to the southwest and to the northeast.

The Kastoria region has a large proportion of inhabitants of origin. Their ancestors migrated there after the was ratified in 1923. This Pontian Greek population is found throughout the prefecture in the communities of ,, , , , , , and many other villages.