The Saracen Foundry was the better known name for the Possilpark, Glasgow based foundry company W MacFarlane & Co. Ltd, founded and owned by Walter MacFarlane. Macfarlane's was the most important manufacturer of ornamental ironwork in Scotland.

Walter Macfarlane I was born in Torrance of Campsie, near Glasgow in 1817. He worked for the jeweller William Russell, before serving an apprenticeship with blacksmith James Buchanan. He then spent a decade working for Moses, McCulloch & Co's Cumberland Foundry in Stockwell Street.[1]

With his own main home at 22 Park Circus, Glasgow, Macfarlane became a prominent figure in local politics, becoming the President of the Glasgow Liberal Association and a City Councillor. He died in 1885, and is buried in Glasgow Necropolis cemetery.[citation needed] 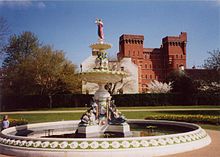 MacFarlane, with partners Thomas Russell and James Marshall, incorporated W MacFarlane & Co. Ltd in 1850. They set up a foundry works in Saracen Lane, behind the Saracen Head Inn, in the Gallowgate. In 1862 the business relocated briefly to Washington Street.[1]

But the business kept growing, and MacFarlane need a vast area of land on which to build both a foundry and a village-styled infrastructure on which to house his workforce. He agreed a deal with the son of Colonel Alexander Campbell of Possil to buy 100 acres (0.40 km2) of his Possil estate in the mid-1860s, including the main estate house where Sir Archibald Alison, 1st Baronet the Sheriff of Lanarkshire resided, on which to build a his new foundry works.

MacFarlane oversaw the removal of all the trees, creating the foundry on 14 acres (57,000 m2), with its main gates at 73 Hawthorn Street. After creating railway access to his foundry from both the North British Railway and the Hamiltonhill Branch of the Caledonian Railway, MacFarlane laid out the rest of the park land as streets and houses, including naming the street fronting his factory "Saracen Street."[2]

The plaque of the Saracen Foundry, on the bridge at Whitehead railway station, Northern Ireland

MacFarlane renamed the location Possilpark, which went from being residence to 10 people in 1872, to 10,000 in less than two decades later in 1891. The developing layout of Possilpark was described by the then Glasgow Town Council as: "Their work is one of the finest and best conducted in Glasgow, and the new suburb of Possil Park, laid out by them with skill and intelligence, is rapidly becoming an important addition to the great city."[3] Ironically, the foundry's pollution earned Macfarlane the nickname "the Laird of Fossiltown." 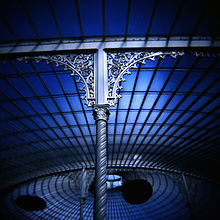 Having joined the firm in 1871, in 1880 Macfarlane's nephew, Walter Macfarlane II (1853–1932), became a partner. On succeeding to the position of owner at the death of his uncle, the young MacFarlane set about making design and standardisation the key to the company's development.

Subsequently, the Saracen Foundry made to a set of standard designs, a series of decorative iron works, from railings, drinking fountains, bandstands, street lamps, pre-fabricated buildings and architectural features. To achieve the design edge they required, the firm employed the best Glasgow architects, including John Burnet, James A Ewing, James Sellars, and Alexander 'Greek' Thomson. James Boucher was commissioned to design the show rooms of the Possilpark foundry as a gigantic showcase for the products, complete with a glass and iron dome and elaborate decorative castings on its Gothic gateway. The works were exported all over the British Empire,[4] and can still be found in abundance in many parts of North Glasgow. 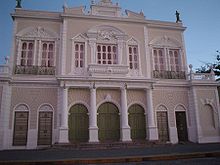 Macfarlane's most celebrated work is the Saracen Fountain in Alexandra Park, Glasgow, which they gifted to the city after exhibiting it in the grounds of the 1901 Glasgow International Exhibition. Designed by D W Stevenson, and using casts of the figures around his earlier 1878 statue of John Platt in Oldham, the fountain featured in the firm's advertising. Copies were later commissioned and erected in: Town Hall Park, Warrington (destroyed for the war effort, 1942; a model version in silver is in the collection of Warrington Borough Council); and the Sammy Marks fountain in the National Zoological Gardens, Pretoria, South Africa.[1]

In the 1860s, John Kibble designed a conservatory for his home at Coulport on Loch Long. However, after production at the Saracen Foundry, it was shipped up the River Clyde by barge to the Glasgow Botanic Gardens, and fully erected at its current location in 1873 by Boyd of Paisley. The Kibble Palace building structure is of curved wrought iron and glass supported by cast iron beams resting on ornate columns, surmounted on masonry foundations. It was initially used as an exhibition and concert venue, before being used for growing plants from the 1880s. Benjamin Disraeli and William Ewart Gladstone were both installed as rectors of the University of Glasgow in the palace, in 1873 and 1879 respectively - its last use as a public events venue, before becoming wholly used for the cultivation of temperate plants. The main plant group is the collection of Australian tree ferns, some of which have lived here for 120 years. In 2004 a £7 million restoration programme was initiated, which involved the complete dismantling of the Palace, and the removal of the parts to Shafton, South Yorkshire for specialised repair and conservation.[5]

Owing to their earlier tie-ins with the architectural trade, between the two world wars Saracen Foundry produced many cast iron panels for commercial buildings, including the former Union Bank on Vincent Street (1924-7); Selfridges in London (1928) and the Art Deco Burton's on Argyle Street (1930). However, the Second World War wreaked havoc on Possilpark in two ways: firstly, by making its industrial works a vast and well-lit target; and secondly when the Minister of Supply and the Ministry of Production made the recovery of iron a key component in increasing war production, removing much of the footprint of Saracen's contribution to the world.

After the war, the combination of the collapse of the British Empire, the move away from steam power and the adaptation of new designs and materials meant a vast decline in orders for Saracen's standard designs. The MacFarlane company moved into standard foundry work, including being one of five foundries casting Sir Giles Gilbert Scott's classic K6 Telephone box for Post Office Telephones.

MacFarlane's was taken over by Allied Founders in 1965, which was itself absorbed by Glynwed Ltd. Possilpark was by this time under invested and rather decrepit, and so the works closed and the infrastructure demolished in 1967.[1] The site is now occupied by Allied Motors.[citation needed]

Owing to the long duration of the factory's life, and the wide distribution of their works, Saracen Foundry pieces can be seen in most part of the world. Those of note include: