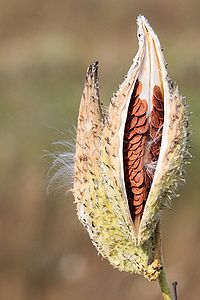 Dehiscence of the follicular fruit of milkweed (Asclepias syriaca) revealing seeds within.

Dehiscence is the opening, at maturity, in a pre-defined way, of a plant structure, such as a fruit, anther, or sporangium, to release its contents. Sometimes this involves the complete detachment of a part. Structures that open in this way are said to be dehiscent. Structures that do not open in this way are called indehiscent, and rely on other mechanisms such as decay or predation to release the contents.

A similar process to dehiscence occurs in some flower buds (e.g. Platycodon, Fuchsia), but this is rarely referred to as dehiscence unless circumscissile dehiscence is involved; anthesis is the usual term for the opening of flowers. Dehiscence may or may not involve the loss of a structure through the process of abscission. The lost structures are said to be caducous.

Manipulation of dehiscence can improve crop yield since a trait that causes seed dispersal is a disadvantage for farmers whose goal is to collect the seed. Many of the agronomically important plants have been bred for reduced shattering.

Poricidal dehiscence occurs in many unrelated organisms, in fruit, causing the release of seeds, and also in the sporangia of many organisms (flowering plants, ferns, fungi, slime molds). Poricidal anthers of various flowers are associated with buzz pollination by insects.

Circumscissile dehiscence involves a horizontal opening that causes a lid to separate completely. This type of dehiscence occurs in some fruit and anthers[2] and also in some flower buds.

Anther dehiscence is the final function of the anther that causes the release of pollen grains. This process is coordinated precisely with pollen differentiation, floral development, and flower opening.

The stomium is the region of the anther where dehiscence occurs. The degeneration of the stomium and septum cells is part of a developmentally timed cell-death program. Expansion of the endothecial layer and subsequent drying are also required for dehiscence. The endothecium tissue is responsible for the tensions that lead to splitting of the anther. This tissue is usually one to several layers thick, with cells walls of uneven thickness due to uneven lignification. The cells lose water, and the uneven thickness causes the thinner walls of the cells to stretch to a greater extent. This creates a tension that eventually leads to the anther being split along its line of weakness and releasing pollen grains to the atmosphere.

Flower buds of Eucalyptus and related genera open with circumscissile dehiscence. A small cap separates from the remainder of the bud along a circular horizontal zone.

There are many different types of fruit dehiscence, that involve different types of structures. Some fruits are indehiscent, and not open to disperse the seeds. Xerochasy is dehiscence that occurs upon drying, and hygrochasy is dehiscence that occurs upon wetting. Dehiscent fruits that are derived from one carpel are follicles or legumes, and those derived from multiple carpels are capsules or siliques[3].

One example of a dehiscent fruit is the silique. This fruit develops from a gynoecium composed of two fused carpels[3], which, upon fertilization, grow to become a silique that contains the developing seeds. After seed maturation, dehiscence takes place, and valves detach from the central septum freeing the seeds. This is also known as shattering and can be important as a seed dispersal mechanism. This process is similar to anther dehiscence and the region that breaks (dehiscence zone) runs the entire length of the fruit between the valves (the outer walls of the ovary) and the replum (the persisting septa of the ovary). At maturity, the dehiscence zone is effectively a non-lignified layer between two regions of lignified cells in the valve and the replum. Shattering occurs due to the combination of cell wall loosening in the dehiscence zone and the tensions established by the differential mechanical properties of the drying cells.

Endothecium tissue found in moss capsules functions in a similar way in dehiscence to the endothecium in the walls of anthers (see above).

Sporangium dehiscence in fungi and myxomycetes

Abscission -- separation of structures that leads to their loss
Anthesis -- the opening of flowers
Wiktionary entry for caducous
Elaters -- structures that form inside a sporangium and aid in spore dispersal of horsetails, liverworts, and hornworts.