Fire-damaged Duralumin cross brace from the frame of the Zeppelin airship "Hindenburg" (DLZ129) salvaged from the crash site at Lakehurst Naval Air Station, NJ, on May 6, 1937

Duralumin (also called duraluminum, duraluminium or dural) is the trade name of one of the earliest types of age-hardenable aluminium alloys. The main alloying constituents are copper, manganese, and magnesium. A commonly used modern equivalent of this alloy type is AA2024, which contains 4.4% copper, 1.5% magnesium, 0.6% manganese and 93.5% aluminium by weight. Typical yield strength is 450 MPa (65 ksi), with variations depending on the composition and temper.[1]

Duralumin was developed by the German metallurgist Alfred Wilm at Dürener Metallwerke Aktien Gesellschaft. In 1903, Wilm discovered that after quenching, an aluminium alloy containing 4% copper would slowly harden when left at room temperature for several days. Further improvements led to the introduction of duralumin in 1909.[2] The name is obsolete today, and mainly used in popular science to describe the Al-Cu alloy system, or 2000 series as designated by the International Alloy Designation System (IADS) originally created in 1970 by the Aluminum Association. 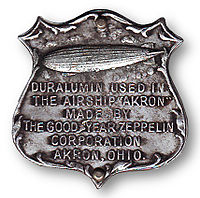 Its first use was in rigid airship frames eventually including the great German passenger Zeppelins LZ 127 Graf Zeppelin, LZ 129 Hindenburg, LZ 130 Graf Zeppelin II, and U.S. Navy airships USS Los Angeles (ZR-3, ex-LZ 126), USS Akron (ZRS-4) and USS Macon (ZRS-5) in the 1920s and 1930s. Its composition and heat treatment were a wartime secret. With this new rip-resistant mixture, duralumin quickly spread throughout the aircraft industry in the early 1930s, where it was well suited to the new monocoque construction techniques that were being introduced at the same time. Duralumin also is popular for use in precision tools such as levels because of its light weight and strength.

The earliest known attempt to use duralumin for a heavier-than-air aircraft structure occurred in 1916, when Hugo Junkers first introduced its use in the creation of the Junkers J 3's airframe, a single-engined monoplane that marked the first use of the Junkers trademark duralumin corrugated skinning. Only the covered wings and tubular fuselage framework of the J 3 were ever completed, before the project was abandoned - the slightly later Junkers J.I armored sesquiplane had its all-metal wings and horizontal stabilizer made in the same manner as the J 3's wings had been, along with the experimental and airworthy all-duralumin Junkers J 7 single seat fighter design, which led to the Junkers D.I low-wing monoplane fighter introducing all-duralumin aircraft structural technology to German military aviation in 1918.

Although the addition of copper improves strength, it also makes these alloys susceptible to corrosion. For sheet products, corrosion resistance can be greatly enhanced by metallurgical bonding of a high-purity aluminium surface layer. These sheets are referred to as alclad, and are commonly used by the aircraft industry.[3]

List of typical uses for the wrought Al-Cu alloys:[1]