The Girl Is Mine

The Girl Is Mine

Infobox Single
Name = The Girl Is Mine

"The Girl Is Mine" is a 1982 hit by and . Composed by Michael Jackson and released as the first single from the world's biggest selling album, "Thriller", the song was about two men fighting over the love of one woman, each claiming that he can love the woman better than the other. It leads into a spoken debate near the end of the song by the two singers with Jackson giving his now famous line: "Paul, I think I told you - I'm a lover, not a fighter." The song peaked at number two on the and number one on the Soul Singles Chart in the winter of 1982-83 before Jackson's second single from "Thriller" ("") took over its spot the next month. On the Adult Contemporary chart, it was the first Michael Jackson single to reach #1; he would not top the A/C chart again until "" in 1987. Jackson and McCartney recorded other duets, including the more successful "" and "The Man" in 1981, which were included on Paul's 1983 album "".

The song has recently been re-recorded by Jackson and rapper for the Thriller - 25th anniversary Edition album called "".

A by lounge act , featuring an "impersonated" , appeared on their 2005 album "". It was also covered by , often intertwined with verses of the song "" by .

The song inspired R&B singers Brandy and Monica in the 1998 hit, "". Though not a cover of "The Girl Is Mine", "The Boy Is Mine" had a similar premise, and similarly featured a spoken debate between Brandy and Monica at the beginning of the song.

and performed the song on the March 6th, 2008 episode of the . The "Girl" in question being the , in a competition to show who loves America more. [http://www.comedycentral.com/colbertreport/videos.jhtml?videoId=156643] 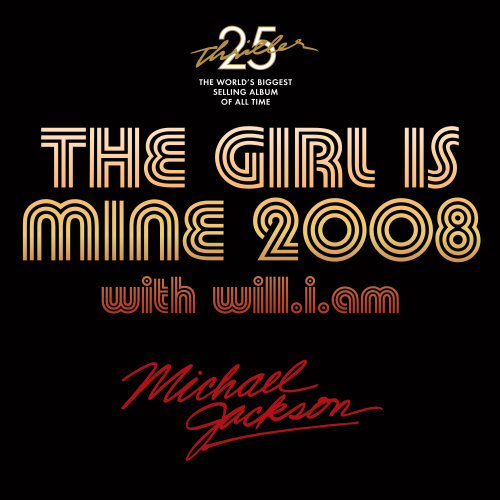 In 2007, a demo version of the song (before 's involvement) was remixed with added new lyrics rapped by hip-hop vocalist and producer , for "" (a 25th anniversary special edition of "Thriller"). The mix is very different from the "Thriller" album recording and is significantly shorter - conforming to the modern trend for shorter songs being more popular as singles. Hip-hop beats have been layered over the remixed song, creating a very different sound and vibe though Jackson's original vocal recordings were retained. The song includes never before heard different and additional vocals by Jackson, taken from the original demo which is also included on the physical 5" CD single as well as iTunes downloads in most European iTunes stores.

Internationally, "The Girl Is Mine 2008" was released as a downloadable single on [ [http://www.mjworld.net/news/2007/12/14/new-single-and-more/ Michael Jackson's New Single and More - From UK Fan Club] - MJWN 14.12.07] and as a physical release on . [ [http://www.mjfanclub.net/home/index.php?option=com_content&task=view&id=706&Itemid=1 The Michael Jackson Fan Club - 'The Girl Is Mine 2008' Out Now ! ] ] In the the original physical release date was but pushed back to . [ [http://www.mjfanclub.net/home/index.php?option=com_content&task=view&id=786&Itemid=59 The Michael Jackson Fan Club - Single Release Date Change In UK ] ] In the however, "Wanna Be Startin' Somethin' 2008" was the first single to be released. [ [http://profile.myspace.com/index.cfm?fuseaction=user.viewprofile&friendID=42261999 MySpace.com - Michael Jackson - Pop / Rock / Soul - www.myspace.com/michaeljackson ] ] These are Jackson's first singles since "One More Chance" , in 2003. The song has no