Shoe tossing (or shoe flinging), the act of using shoes as improvised s or s, is a constituent of a number of folk s and practices. Today, it is commonly the act of throwing a pair of onto telephone wires, powerlines, or other raised wires. A related practice is shoe tossing onto s or s. Shoe tossing has been observed in areas of the , , Britain, , , , , , and .

In the Arab world: a gesture of contempt

In the world, shoe flinging is a gesture of extreme disrespect. A notable occurrence of this gesture happened in , in . When U.S. forces pulled down a giant statue of during the , many Iraqi detractors of Hussein threw their shoes at the fallen statue.

This may be an ancient from the Middle East; 60:10, speaking of some of the traditional enemies of Judah, says that " "is" my washpot; over will I cast out my shoe...." (KJV)

The shoe represents the lowest part of the body (the ) and displaying or throwing a shoe at someone or something in Arab cultures denotes that the person or thing is "beneath them." Showing the bottom of one's feet or shoes (for example, putting one's feet up on a table or desk) in Arab cultures is considered an extreme insult. Examples include Iraqi citizens smacking torn-down posters of Saddam Hussein with their shoes, and the depiction of on a tile mosaic of the floor of the 's lobby, forcing all visitors entering the hotel to walk on Bush's face to enter the hotel.

Shoe flinging or "shoefiti" is the American and Canadian practice of throwing shoes whose s have been tied together so that they hang from overhead s such as power lines or cables. The shoes are tied together by their laces, and the pair is then thrown at the wires as a sort of . This practice plays a widespread, though mysterious, role in in the United States. Shoe flinging has also been reported in , , , and .

Shoe flinging occurs throughout the United States, in rural as well as in urban areas. Usually, the shoes flung at the wires are sneakers; elsewhere, especially in rural areas, many different varieties of shoes, including shoes and s, also are thrown.

A number of sinister explanations have been proposed as to why this is done. Some say that shoes hanging from the wires advertise a local crack house where is used and sold (in which case the shoes are sometimes referred to as "Crack Tennies"). It can also relate to a place where Heroin is sold to symbolize the fact that once you take Heroin you can never 'leave': a reference to the addictive nature of the drug. Others claim that the shoes so thrown commemorate a -related , or the death of a gang member, or as a way of marking gang turf. [cite web
url= http://www.snopes.com/crime/gangs/sneakers.htm
title= The Secret Language of Sneakers
accessdate= 2007-06-15
author=
last= Mikkelson
first= Barbara
authorlink= Barbara Mikkelson
coauthors=
date= 1999-04-12
work= Urban Legends Reference Pages ()] A newsletter from the mayor of cites fears of many Los Angeles residents that "these shoes indicate sites at which drugs are sold or worse yet, gang turf," and that city and utility employees had launched a program to remove the shoes. [cite web
url= http://www.lacity.org/mayor/teamworkla/newsletters/teamworkla_intrnewsletters72311897_06102003.pdf
title= East Los Angeles NSC Combats Problem of Overhead Shoes on Wires
accessdate= 2007-06-15
author= TeamWork LA
year= c. 2003
format= PDF
archiveurl= http://web.archive.org/web/20031007130106/http://www.lacity.org/mayor/teamworkla/newsletters/teamworkla_intrnewsletters72311897_06102003.pdf
archivedate=2003-10-07] These explanations have the ring of to them, especially since the practice also occurs along relatively remote stretches of rural highways that are unlikely scenes for gang murders or crack houses.

Other, less sinister, explanations have been ventured for the practice. Somewho claim that shoes are flung to commemorate the end of a year, or a forthcoming as part of a . In , it has been said that when a young man has lost his virginity he tosses his shoes over telephone wires to announce this to his peersFact|date=March 2008. It has been suggested that the custom may have originated with members of the , who are said to have thrown military boots, often painted orange or some other conspicuous color, at overhead wires as a part of a rite of passage upon completing or on leaving the service.Fact|date=March 2008 Others claim that the shoes are stolen from other people and tossed over the wires as a sort of tactic, or as a played on drunkards.Fact|date=March 2008 Others simply say that shoe flinging is a way to get rid of shoes that are no longer wanted, are uncomfortable, or do not fit.Fact|date=March 2008 It may also be another manifestation of the human instinct to leave their mark on, and decorate, their surroundings.Fact|date=March 2008

In the "", a flings shoes into trees as a part of a campaign to call attention to a fictional named Sergeant William Schumann, who was given the "The Old Shoe." In another motion picture, "", a character is struck by in an attempt to retrieve shoes from a power line, and improbably acquires s as a result.

Shoe flinging may cause utility outages, as the weight of the dangling shoes can disrupt the power line. In addition, peoplewho have been killed by electrocution while trying to remove shoes from power lines. have asked the public to call them instead of trying to remove the shoes themselves.

In some neighborhoods, shoes tied together and hanging from power lines or tree branches signify that someone has died. The shoes belong to the dead person. The reason they are hanging, legend has it, is that when the dead person's spirit returns, it will walk that high above the ground, that much closer to heaven.Fact|date=June 2007Another superstition holds that the tossing of shoes over the power lines outside of a house is a way to keep the property safe from ghosts. Yet another legend involves that shoes hanging from telephone wires signals someone leaving the neighborhood onto bigger and better things.

* There is a scene in 's film "" where a man's shoes are thrown on a power line.
* The movie "" contains several scenes where old shoes are thrown onto trees and telephone lines in support of a supposed war hero.
*In "" after David Durango, one of the main characters, gets a pair of Nike shoes he throws his old pair onto the power lines.
*In "" during the introductory animation.
* In "" there is a brief shot where a pair of sneakers is shown thrown over a power line in Long Beach.
* In "", a pair of shoes is tossed onto power lines. The film's protagonist retrieves the shoes, receiving an electric shock in the process. As a result, he is endowed with the talent of the pairs' previous owner.
* In "" Jon Savage drives under a power line with many old shoes while singing .
* In "", the first shot is of a pair of sneakers thrown over a power line.
* In "" two pairs of shoes thrown over a powerline are briefly seen. 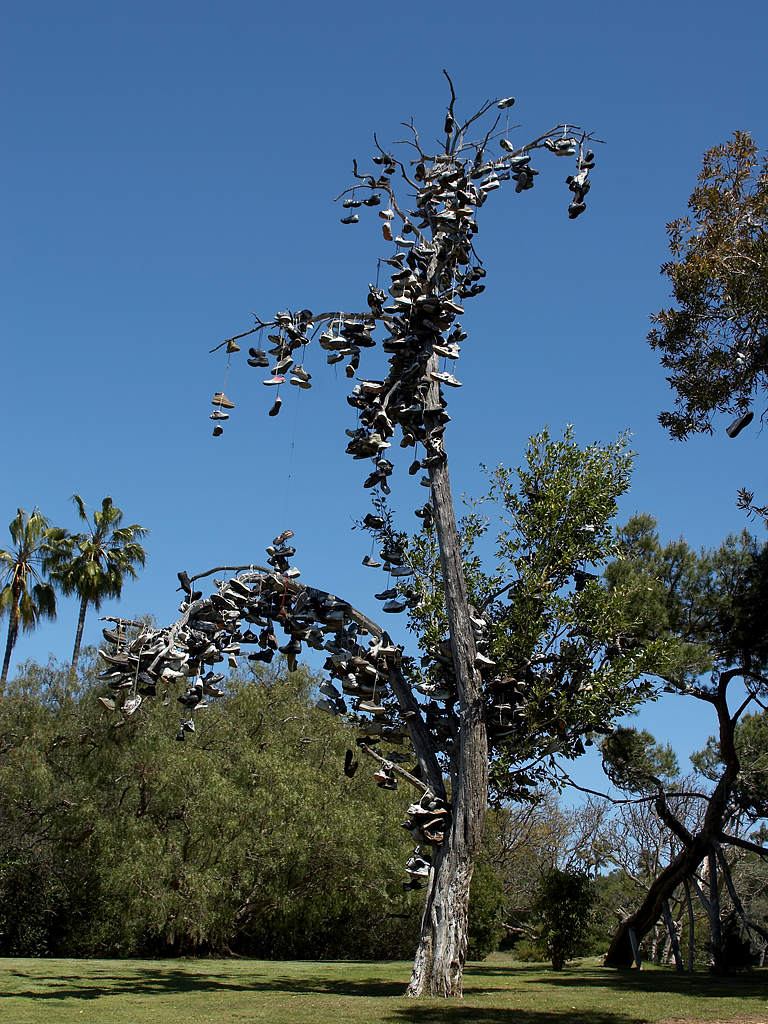 thumb|The Shoe Tree in Morley Field, San Diego. [">The Shoe Tree in Frisbee Playground, Morley Field, San Diego fell down (allegedly on 1/7/2008, confirmed on 1/8/2008), caused by a long period of rain.] A Shoe tree, not to be confused with the shoe-preservation device of the same name, is a (or, occasionally, a powerline pole or other wooden object) that has been festooned with old shoes. Shoe trees are generally located alongside a major local thoroughfare, and may have a theme (such as s). There are currently at least seventy-six such shoe trees in the United States, [Roadside America. Search results for "shoe tree." http://www.roadsideamerica.com/roger/QueryTips.php3?tip_AttractionName=shoe+tree&tip_Town=&tip_State=&Submit=Find ] and an undetermined number elsewhere.The legend of how a particular tree came to be in Middlegate, , is quite interesting: a couple of local teenagers were spending the late spring evening hours by the tree. Being on the roadside of US 50, the loneliest highway in the US, they had a lot of time to themselves.Being the that they were, they ended up unclothed, exploring each other's anatomy.The story says that they came to an argument, and she got in the car and left, naked.The boy put his clothes on, and made a ball out of hers. The shoes, however, he did not take. He tied the shoestrings of both shoes together, and flung them into the tree, in an act of revengeful fury. Supposedly, since he had to get home without the car, he figured she should walk without her shoes.From here, the story gets fuzzier, and no one agrees on who was the next person to add the next pair of shoes to the tree. However, the legend says when the pair of shoes of this indignated boy fall, the girl will be involved in a traffic accident, not far away from there.

Boot throwing has been a competitive sport in for many years, although not one that is taken very seriously. or are the heavy rubber boots worn by most farm workers and many other outdoor workers. A competition to see who can throw a gumboot the furthest is a feature of many Agricultural Field Days in the rural communities. The town of in the central is particularly identified with this sport; they claim to be the Gum Boot Throwing Capital of New Zealand. They hold an annual competition in the main street and award a Golden Gumboot as the trophy; see .

Since the sport has been practiced competitively in . The World Championship Competition was won by Germany who is hosting the Competition at . Apparently teams are also expected from , and .