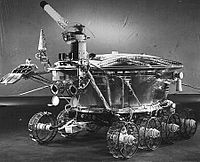 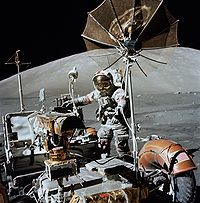 A lunar rover or Moon rover is a space exploration vehicle designed to move across the surface of the Moon. Some rovers have been designed to transport members of a human spaceflight crew, such as the Apollo Lunar Roving Vehicle; others have been partially or fully autonomous robots, such as Lunokhod 1.

Lunokhod 1 held the durability record for space rovers for more than 30 years, until a new record was set by the Mars Exploration Rovers.

The Lunar Roving Vehicle (LRV) was a battery-powered four-wheeled rover used on the Moon during the last three missions of the American Apollo program (15, 16, and 17) during 1971 and 1972. It was popularly known as the moon buggy, a play on the phrase "dune buggy".

The LRV could carry one or two astronauts, their equipment, and lunar samples.

Chang'e 3 is a Chinese lunar rover scheduled for launch in 2013. It will be China's first lunar rover, part of the second phase of the Chinese Lunar Exploration Program undertaken by China National Space Administration (CNSA).

The Chandrayaan II mission is the first lunar rover mission by India, consisting of a lunar orbiter and a lunar lander. An opportunity was given to students to design this rover. 150 students submitted their designs but only 6 were selected. They gave a demonstration in NRSA and are going to ISRO. The Russian designed rover weighs 50 kg, will have six wheels and will be running on solar power. It will land near one of the poles and will operate for a year, roving up to 150 km at a maximum speed of 360 m/h. The proposed launch date of the mission is 2014.

The ATHLETE rover in a test facility at JPL. Taken August, 2008.

NASA's plans for future moon missions call for rovers that have a far longer range than the Apollo rovers.[1]

The All-Terrain Hex-Legged Extra-Terrestrial Explorer (ATHLETE) is a six-legged robotic lunar rover test-bed under development by the Jet Propulsion Laboratory (JPL). ATHLETE is a testbed for systems and is designed for use on the Moon.[2]

The system is in development along with NASA's Johnson and Ames Centers, Stanford University and Boeing.[3]

ATHLETE is designed, for maximum efficiency, to be able to both roll and walk over a wide range of terrains.[2]

Scarab is a new generation lunar rover designed to assist astronauts take rock and mineral samples and explore the lunar surface.[4][5] It is being developed by the Robotics Institute of Carnegie Mellon University, supported by NASA.

The SEV is a proposed successor to the original Lunar Roving Vehicle from the Apollo missions. It combines a living module, as it has a pressurized cabin containing a small bathroom and space for 2 astronauts (4 in case of emergency), and a small truck.