] [cite web
url= http://www.shannonsullivan.com/drwho/serials/6e.html
title= Arc of Infinity
publisher = A Brief History of Time Travel
last = Sullivan
first = Shannon
date = 2007-08-07
accessdate = 2008-08-30]
*The working titles for this story were "The Time Of Neman" and "The Time Of Omega".
*For Parts One and Two, the character of Omega was credited as "The Renegade" on the end credits.
*Substantial portions of the story were filmed on location in Amsterdam. This was only the second time the show had filmed outside of Britain. John Nathan-Turner hoped to repeat the success of the first story filmed overseas, "". Amsterdam was chosen both because the BBC had recently developed contacts there and because it was cheap to arrange travel and hotel accommodations there.
* stated on "Doctor Who: The Colin Baker years" video that believed his performance was a little arch, and there for gave him the nickname of Archie. 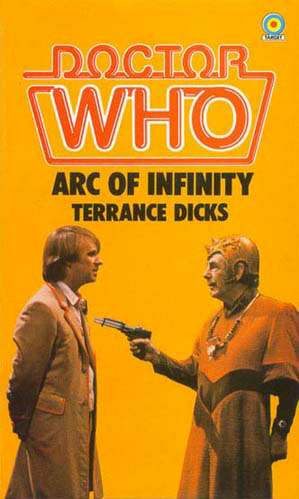 *This story was released on in March 1994.
*A double-pack featuring both and Arc of Infinity was released on .
*The DVD contains an option to view the story containing CGI enhanced special effects sequences.
*For The DVD, Peter Davison and Colin Baker did a commentary together, along with Janet Fielding and Sarah Sutton and was recorded on January 15 2007 on the same day that the commentary for was recorded.