The Cincinnati Zoo is located in the Cincinnati neighborhood of Avondale. It was founded on 65.4 acres (26.5 ha) in the middle of the city, and since then it has acquired some of the surrounding blocks and several reserves in Cincinnati's outer suburbs. The zoo conducts breeding programs, and was the first to successfully breed California Sea Lions. The zoo also has other breeding programs including Cheetahs, Sumatran rhinoceros, Malayan tigers, Western Lowland Gorillas, Pottos, and Masai giraffes. The Cincinnati Zoo was the home of Martha, the last living passenger pigeon, which died there in 1914. It was also home to the last living Carolina parakeet in 1918. 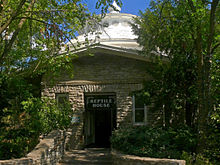 In 1872, Andrew Erkenbrecher and several other residents created the Society for the Acclimatization of Birds in Cincinnati to acquire insect-eating birds to control a severe outbreak of caterpillars. A collection of approximately 1,000 birds imported from Europe in 1872 was housed in Burnet Woods before being released. The 'Acclimatization Society of Cincinnati' was established in 1873 as similar organizations with imperial aims proliferated in Moscow, Berlin, London and Melbourne in the late nineteenth century.[4]

The Zoological Society of Cincinnati established a zoo, consisting of just over sixty-six acres in Blakely Woods. The land was purchased by Andrew Erkenbrecher and leased to the Zoological Society for 99 years. This site was acquired in 1874 and the zoo officially opened its doors to the public on September 18, 1875, making the Cincinnati Zoo & Botanical Garden the second oldest intentionally constructed zoo in the United States.[5] The Zoo opened with 769 animals on display. Admission was 25 cents for adults and 15 cents for children.[6]

Founded by Jonathan Schoonover of Cincinnati and designed by the landscape engineer Theodor Fundeisen, The Cincinnati Zoo and Botanical Garden was originally named the Cincinnati Zoological Gardens. Architect James W. McLaughlin, who constructed the zoo's first buildings, designed the earliest completed zoological exhibits in the United States.[5] The Zoo's original animal collection consisted of eight monkeys, two Grizzly bears, three White-tailed deer, six raccoons, two elk, a buffalo, a Spotted Hyena, a tiger, an American alligator, a circus elephant, and over four hundred birds, including a crow. The zoo also is home to some common peafowls.

The first guide book about the Cincinnati Zoo was written in 1876 in German. The founders of the zoo, including its first general manager, were German immigrants and the city had quite a large German-speaking population. The first English-language edition (illustrated) was published in 1893.[7]

In 1878 the first sea lion was born in captivity, and the first pair of giraffes were acquired by the zoo (Daisy and Abe).[6]

In its first 20 years the zoo experienced many financial difficulties, and despite selling 22 acres (8.9 ha) to pay off debt in 1886,[6] it went into receivership in 1898. The Cincinnati Zoological Company was able to bring the zoo out of receivership and keep it going. The Cincinnati Traction Company purchased it in 1901 and operated the zoo for 16 years. In 1917, the Cincinnati Zoological Park Association, funded by donations from philanthropists Mary Emery and Anna Sinton Taft, took over management of the zoo. In 1932 the city purchased the zoo and now runs it through the Board of Park Commissioners.

In 1931 the zoo procured what was at the time the only trained Gorilla in the world. Suzie was originally captured in the Belgian Congo, and brought to the United States on Graf Zeppelin in August 1929. When she arrived at the zoo, Suzie had just finished a tour of North America. Although experts had said she had no more than six months to live when she arrived in America, she lived for 21 years and died at the Cincinnati zoo on October 29, 1947. Her body was donated to the University of Cincinnati, where her skeleton was used for many years, and destroyed in a fire in 1974.[8]

In 1951 the original Monkey House was converted into the Reptile House.[6]

In addition to its live animal exhibits, the zoo houses refreshments stands, a dance hall, roads, walkways, and picnic grounds. Between 1920 and 1972, the Cincinnati Summer Opera performed in an open-air pavilion and were broadcast by NBC radio.

In 1987, the zoo was designated as a National Historic Landmark due to its significant architecture featured in the Elephant House, the Reptile House, and the Passenger Pigeon Memorial. The Zoo's Reptile House is the oldest existing Zoo building in the country, dating from 1875.[1]

An Southern Brazilian Ocelot asleep at the Cincinnati Zoo and Botanical Garden.

Animals at the zoo have held several records, including the longest living alligator in captivity at the time (at about 70 years of age),[6] the fastest cheetah in captivity,[9] and the largest Komodo dragon (who died in 2005). The zoo was the first in the United States to put an aye-aye on display, and after losing its last aye-aye in 1993, it finally acquired another in 2011: a 6-year old transferred from the Duke Lemur Center in North Carolina.[10]

Center for Conservation and Research of Endangered Wildlife (CREW)

The Cincinnati zoo has been active in breeding animals to help save species, starting as early as 1880 with the first hatching of a Trumpeter Swan in a zoo, as well as four passenger pigeons. This was followed in 1882 with the first American bison born in captivity.[6]

In 1981 the zoo established the Carl H. Lindner Jr. Family Center for Conservation and Research of Endangered Wildlife for the purpose of using science and technology to understand, preserve, and propagate endangered flora and fauna and facilitate the conservation of global biodiversity. In its Frozen Zoo plays a major role. In it are stored over 2,500 specimens representing approximately 60 animal and 65 plant species.

The Zoo is currently building the 8-acre (3.2 ha) Africa Savannah exhibit, which will be the largest animal exhibit in the Zoo's history. Phase I, the first of the four phases, includes an expanded yard for Masai Giraffes, a new Greater Flamingo and an East African Crowned Crane exhibit and a new and improved Cheetah Encounter.[11][12] When completed, the African Savannah will feature Olive Baboons, African Wild Dogs, a new Cheetah exhibit, a hoof stock yard that will contain various Antelope (Lesser Kudu, Bontebok, and Common Eland have been rumored), Grévy's Zebras, Kori Bustards and Ostriches, and Nile Hippos will also be exhibited. There will also be a new restaurant, and kopje exhibit. There is a possibility that the Slender-tailed Meerkats will return for the exhibit. Rumors of a walk-through Impala exhibit have also floated about. The exhibit will occupy what formerly was the main zoo parking lot off Dury Avenue.[13]

Kroger and Pepsico teamed up together to donate a check to the zoo for $1,000,000, to go towards the Africa. The next phase, which is phase III, which is a wider vista that will offer visitors the opportunity to see African primates such as Olive baboons, Africa’s most endangered predator, the African wild dog, and a mixed herd of antelope (for most of the antelopes listed above), with some of Africa’s most spectacular birds, such as Ostrich, Grey Crowned Crane , and Marabou Stork. Overlooking Africa will be a new dining concept that will be without rival in the region. This indoor and outdoor facility will include group rental facilities as well as an African-themed restaurant for visitors. With $4.3 million still needed to complete Phase III, the Zoo expects Africa to open in 2014.[14]

A final $7 million phase IV will bring Nile Hippos, one of the most remarkable and fearsome creatures in all of Africa. The hippo area will give visitors a dramatic experience by providing both above- and below-water viewing – a much anticipated and desired exhibit by Zoo visitors.[14]

Once the Night Hunters building transformation is complete, the Nocturnal House Closed. The Nocturnal House will unfortunately be turned into offices, and the back wall of the indoor Komodo dragon exhibit will be expanded. The Night Hunters exhibit is phase one of a larger outdoor Cat Canyon expansion which is scheduled to open by May 2012. The expanded Cat Canyon will link the Night Hunters experience with the current Tiger Canyon exhibits and include new space for Malayan tigers, Pumas and Snow Leopards. The Cat Canyon expansion is set to start on September 6, following Labor Day Weekend, and be finished in early summer 2012. During construction, the area behind Night Hunters will close and the large cats that are currently there will be off exhibit until Cat Canyon reopens. Parts of the path that winds around the “Veldt” (Rhino Reserve) will also be closed during construction.

The expanded Cat Canyon will link the Night Hunters experience with the current Tiger Canyon exhibits and will include a watering hole for the tigers. There will also be a new facility for snow leopards. Cat Canyon aims to further commitment to the conservation of threatened species through education and scientific research and support of conservation in the wild.[15]