Stormfront is a white nationalist and supremacist[1] neo-Nazi[2] Internet forum that has been described as the Internet's first major hate site.[3]

Stormfront began as an online bulletin board system in the early 1990s before being established as a website in 1995 by former Ku Klux Klan leader and white nationalist activist Don Black. It received national attention in the United States in 2000 after being featured as the subject of a documentary, Hate.com. Stormfront has been the subject of controversy after being removed from French and German Google indexes, for targeting an online FOX News poll on racial segregation, and for having political candidates as members. Its prominence has grown since the 1990s, attracting attention from watchdog organizations that oppose racism and antisemitism.

The website is structured as a theme-based discussion forum with numerous boards for topics including ideology, science, revisionism, homeschooling, and self defense. Stormfront also hosts news stories, a merchandise store, content aimed at children, and extensive links to racist organizations. The site has a logo featuring a Celtic cross common to neo-nazi iconography surrounded by the motto "White Pride World Wide". 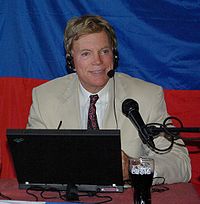 White nationalist politician and activist David Duke, whose 1990 campaign for United States Senator in Louisiana was the impetus for the first iteration of Stormfront.

Stormfront began in 1990 as an online bulletin board for white nationalist activist David Duke's campaign for United States Senator of Louisiana.[4] The name "Stormfront" was chosen for its connotations of a political or military front and an analogy with weather fronts that invokes the idea of a tumultuous storm ending in cleansing.[4] It was opened to the public in 1994, and the Stormfront.org website was founded in 1995, becoming the first website associated with white supremacy.[5][6] Until this point, attempts at using the Internet for the white pride movement met with limited success,[7] but Stormfront quickly began to become popular with the growth of the Internet at this time, according to owner Don Black.[4][8] A former Grand Wizard of the Ku Klux Klan and in the 1970s a member of the National Socialist White People's Party (which had changed its name from the American Nazi Party in 1967),[9] Black first received computer training while imprisoned for his role in an abortive 1981 attempt to overthrow the government of Dominica.[10][11]

The site received considerable attention in the United States, such as in Hate.com, a 2000 CBS/HBO documentary television special which focused on the perceived threat of white nationalist and white supremacist organisations on the Internet.[12] Narrated by Morris Dees of the Southern Poverty Law Center, it featured interviews with Black and his son Derek as well as other white nationalist groups and organisations, and was criticised by Black as conflating Stormfront with unrelated websites and individuals.[12] Carol M. Swain, assessing Hate.com and similar broadcasts of the period, found that the commentators "never seriously discuss the issues that have angered white nationalists", noting that Hate.com omitted any coverage of Stormfront's articles on crime, affirmative action and other social issues.[12] She characterised the documentaries' approach as "typical of media policy" in emphasising racial hate against minority groups and avoiding mention of racially motivated attacks on white people, thereby reinforcing "white nationalists' claim of a double standard".[12] Stormfront had previously been accused of citing crime statistics out of context in order to support claims of reverse discrimination in I Found It on the Internet, a 1999 book on internet content by Frances Jacobson Harris.[13]

In 2002, search engine Google acted to remove Stormfront.org from their French and German indexes in order to comply with French and German legislation forbidding links to websites which host white supremacist, Holocaust-denying, historical revisionist or similar material.[14] Stormfront returned to the news in May 2003, when its members targeted an online poll on a racial issue. Fox News Channel host Bill O'Reilly reported on a racially segregated prom being held in Georgia and posted a poll on his website asking his viewers if they would send their own children to one. A link to the poll was posted on Stormfront and messages subsequently posted there implied that a mass of readers had duly voted in order to skew the poll in favor of segregation. O'Reilly reported this the following week and refused to read the final results due to this, citing Stormfront as the culprit by name and referring to it as a "Neo-Nazi organization".[15] In a prominent outing of one of its typically pseudonymous members, Doug Hanks withdrew from seeking the Republican Party nomination for one of four seats on the city council of Charlotte, North Carolina in August 2005 after it was revealed that he had posted on Stormfront. Hanks, a writer and actor from Connecticut, had posted more than 4,000 comments over the previous three years, including one in which he wrote, "Let's treat all the Blacks like the rabid beasts they are."[16] Hanks claimed that his postings were intended to gain the trust of Stormfront users in order to help him write a novel, saying "I did what I thought I needed to do to establish myself as a credible white nationalist."[16]

In a 2001 USA Today article, journalist Tara McKelvey called Stormfront "the most visited white supremacist site on the net".[17] The number of registered users on the site rose from 5,000 in January 2002 to 52,566 in June 2005,[18] by which year it was the 338th largest Internet forum, received more than 1,500 hits each weekday and ranked in the top one percent of Internet sites in terms of use.[19][20] By June 2008, the site was attracting more than 40,000 unique users each day.[21] Operating the site from its West Palm Beach, Florida headquarters is Black's full-time job, and he is assisted by his son and 40 moderators.[9][21][22] The popularity of the site attracted attention not only from racists, but also from groups such as the Simon Wiesenthal Center and the Anti-Defamation League (ADL), whose efforts against the site have been so far ineffective.[23] The ADL describes Stormfront as having "served as a veritable supermarket of online hate, stocking its shelves with many forms of anti-Semitism and racism".[24]

In 2006, the Southern Poverty Law Center reported a discussion on Stormfront in which white nationalists were encouraged to join the U.S. Military in order to learn the skills necessary for winning a race war.[25][26] The 2008 United States presidential candidacy of African-American Barack Obama was a cause of significant concern for some Stormfront members;[21] the site got 2,000 new members the day after Obama was elected as President, and went temporarily off-line due to the overwhelming amount of activity.[27] Stormfront posters saw Obama as representing a new multicultural era in the United States replacing "white rule", feared that he would support illegal immigration and affirmative action, and would help make white people a minority group.[21] During the primary campaigns, The New York Times mistakenly claimed that Stormfront had donated $500 to Republican Party candidate Ron Paul; in fact, it was site owner Don Black who had contributed the money to Paul.[28] In an April 2009 shooting, Richard Poplawski, a poster on the site, was charged with ambushing and killing three Pittsburgh Police officers and attempting to kill nine others.[29]

Stormfront is a resource for those courageous men and women fighting to preserve their White Western culture, ideals and freedom of speech and association—a forum for planning strategies and forming political and social groups to ensure victory.

Stormfront is notable for the white supremacist views of its members,[1] a characterization that is contested by Don Black as an inaccurate description; Black believes the term "supremacy" implies a system which "isn't descriptive of what [the members] want".[4] It is also a Neo-Nazi website,[2] on which Nazi mysticism and the personality cult of Adolf Hitler are sustained and Nazi iconography is popular.[31] The Stormfront.org website is organized primarily as a discussion forum with multiple thematic sub-fora including "News", "Ideology and Philosophy" ("Foundations for White Nationalism"), "Culture and Customs", "Theology", "Quotations", "Revisionism", "Science, Technology and Race" ("Genetics, eugenics, racial science and related subjects"), "Privacy", "Self-Defense, Martial Arts, and Preparedness", "Homemaking", "Education and Homeschooling", "Youth", and "Music and Entertainment".[18][21] There are boards for different geographic regions, and a section open to unregistered guests, who are elsewhere unable to post.

Stormfront.org is comprehensive and frequently updated, hosting files from and links to a number of white nationalist and white racist websites,[6] an online dating service (for "heterosexual White Gentiles only"), and electronic mailing lists that allow the white nationalist community to discuss issues of interest.[23][32][33] It also features a selection of current news reports, an archive of past stories, live streaming of The Political Cesspool radio show,[34] and a merchandise store featuring literature and music.[30] Stormfront has published stories aimed at children.[31] A 2001 study of recruitment by extremist groups on the Internet noted that Stormfront came close to offering most of the standard services offered by web portals, including an internal search engine, web hosting, and categorized links, and lacking only in an Internet search engine and the provision of free email for its members (though a limited email service was available at the price of $30 a month).[31]

Prominently featured on the homepage is a Celtic cross surrounded by the words "white pride, world wide." A mission statement praises courage and freedom. Stormfront states it discourages racial slurs, and prohibits violent threats and descriptions of anything illegal.[18][31] Others state that only blatant hate and calls for violence are kept off the opening page.[30][35]

Don Black has long worked to increase the mainstream appeal of white supremacism. His medium is Stormfront.org.[18] Black established the website to heighten awareness of perceived anti-white discrimination and government actions detrimental to white people,[12] and to create a virtual community of white extremists.[4][21][31][36] Black owns the site's servers so he need not depend on website hosting providers.[20]

Black's organization inculcates enough white pride to make "its worldwide aspirations meaningful and socially significant".[30] Stormfront keeps the rhetoric in its forums muted, discourages racial slurs, and prohibits violent threats and descriptions of anything illegal.[18][31] Site moderator Jamie Kelso is "the motivating force behind real community-building among Stormfront members" due to his energy and enthusiasm in organizing offline events.[37] Black's positioning the site as a community with the explicit purpose of "defending the white race" has helped sustain the community over its long lifetime, as it attracts white men and women who define themselves in opposition to ethnic minorities, particularly Jews.[18]

Stormfront established MartinLutherKing.org to discredit Martin Luther King, Jr.[38] In a 2001 study of white nationalist groups including Stormfront, academics Beverly Ray and George E. Marsh II commented that "Like the Nazis before them, they rely upon a blend of science, ignorance, and mythology to prop up their arguments".[31][39]

Stormfront presents itself as engaged in a struggle for unity, identifying culture, speech and free association as its core concerns,[30] though members of Stormfront are especially passionate about racial purity.[37] It promotes a lone wolf mentality, linking to white nationalist theorist Louis Beam's influential work on leaderless resistance and offering a sympathetic assessment of Benjamin Nathaniel Smith, a white supremacist who committed suicide after a racially-motivated killing spree in June 1999.[31] Scholar Violet Jones notes that Stormfront credits its mission to the founding myth of an America "created, built, and ideologically grounded by the descendants of white Europeans."[40] Asked in 2008 by an interviewer for Italian newspaper la Repubblica whether Stormfront was a twenty-first century version of the Ku Klux Klan without the iconography, Black responded affirmatively, though he noted that he would never say so to an American journalist.[41]

In 2009, roughly two dozen white supremacists demonstrated outside the St. Clair County, Illinois courthouse in response to a recent school bus beating which some had claimed was racially motivated.[citation needed] The rally had been promoted and organized in part by Stormfront users. It lasted for roughly one hour before being broken up by police.[42]