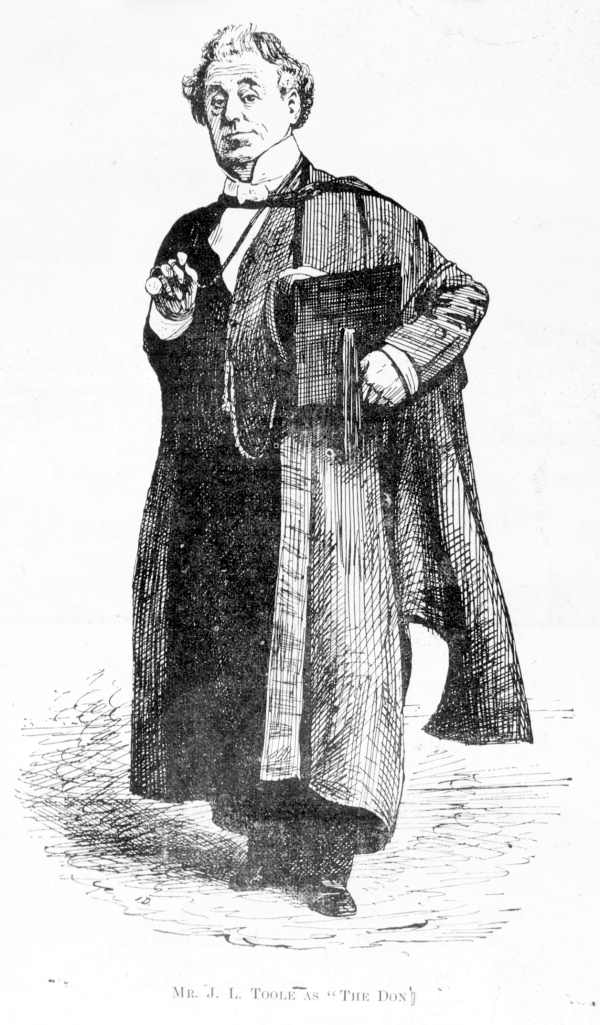 John Lawrence (J. L.) Toole ( &ndash; ) was an English comic and theatrical producer. He was famous for his roles in farce and in serio-comic melodramas in a career that spanned more than four decades. He was so famous in his day that he was the first actor to have a named after him.

Toole was born in , the younger son of James Toole and his wife, Elizabeth. His father was a messenger for the East India Company and for some years an usher at the Old Bailey, who for many years in the 1840s acted as in the City of London.

He was educated at the from 1841–45, and started life as a clerk in a wine merchant's office. In 1854, Toole married Susan Hale (née Caslake), a widow five years older than he. They had a son, Frank Lawrence, and a daughter, Florence Mabel, but both children died in their 20s.

Toole began his acting career by training as an amateur with the City Histrionic Club, beginning in 1850 and by performing in other amateur theatricals and in comic sketches. He earned good notices, particularly as Jacob Earwig in "Boots", and soon met , who had heard of him and came to see him act.

In 1854, Toole made his first professional appearance in London at the St. James's Theatre, acting as in "The King's Rival", by and , and Weazel in "My Friend the Major" by Selby.

Toole was then engaged in 1868 at the Gaiety Theatre by Hollingshead, appearing in many pieces there including "Thespis", the first collaboration. In 1873–74, among other successes, he portrayed the Irishman Brulgruddery in "John Bull" by the younger Colman; Bob Acres in "" by , together with and ; and created the role of the barrister Hammond Coote in "Wig and Gown" by .

In 1878, Toole created the role of Charles Liquorpond in "A Fool and his Money" by H. J. Byron. Liquorpond was a retired footman unexpectedly overtaken by wealth, and Toole's affectedly superior pronunciation, particularly of his own name, was a tremendous success. In his prime, Toole achieved wide popularity as a comic actor, being noted for his comic delivery of words, but he did not confine himself exclusively to comedy. He also excelled in domestic melodramas (adaptations by and others of and similar writers), playing "tender-hearted victims of fate", where he was famously able to combine humour and pathos. "" said of his performance in "Dearer than Life" by , "Mr. J. L. Toole... is associated in the minds of the general public mainly with parts provoking to uproarious laughter; but it may fairly be questioned whether, like his predecessor in this also, his heart does not lie with, and he himself is not seen to more advantage in, the telling sketches from everyday life to which, for want of a better, we give the name of domestic drama. Anything more lifelike than the intensity of cold and hunger from which he may be almost said to suffer, in the garret-scene, as Michael Garner it would be difficult to conceive." ["The Times", 27 December 1871]

In 1879, Toole realized a lifelong ambition by taking over the management of the in London. This triumph was offset by the death of his son in the same year, after a football injury.

Toole began to be troubled by in 1886. After his daughter died in 1888, followed by his wife in 1889, Toole was disconsolate, and his health deteriorated further.

The critic called him "one of the kindest and most genial men who ever drew breath.... No one acted with more spirit or enjoyed so thoroughly the mere pleasure of acting."

Ultimately he retired to , where after a long struggle with and a degenerative spinal illness, he died at the age of 76. He is buried at Kensal Green cemetery in London, next to his wife and children. Toole was a good businessman and left a considerable fortune of over £81,000, out of which he made a number of bequests to charity, to needy actors and to his friends.

* [http://www.npg.org.uk/live/search/person.asp?LinkID=mp04519 Photos and other images of Toole]