The Man with the Golden Arm

The Man with the Golden Arm is a 1955 American drama film, based on the novel of the same name by Nelson Algren, which tells the story of a heroin addict who gets clean while in prison, but struggles to stay that way in the outside world. It stars Frank Sinatra, Eleanor Parker, Kim Novak, Arnold Stang and Darren McGavin. It was adapted for the screen by Walter Newman, Lewis Meltzer and Ben Hecht (uncredited), and directed by Otto Preminger.[1]

It was nominated for three Academy Awards: Sinatra for Best Actor in a Leading Role, Joseph C. Wright and Darrell Silvera for Best Art Direction-Set Decoration, Black-and-White and Elmer Bernstein for Best Music, Scoring of a Dramatic or Comedy Picture. Sinatra was also nominated for best actor awards by the BAFTAs and The New York Film Critics.[2]

The film was controversial for its time; the Motion Picture Association of America refused to certify the film[3] because it showed drug addiction. The gritty black-and-white film uniquely portrayed heroin as a serious literary topic as it rejected the standard "dope fiend" approach of the time. It was the first of its kind to tackle the marginalized issue of illicit drug use.[4] Because it dealt with the taboo subject of "narcotics," Hollywood's Production Code refused to grant a seal of approval for the film, and it was released without the MPAA's seal of approval. This sparked a change in production codes, allowing movies more freedom to more deeply explore hitherto taboo subjects such as drug abuse, kidnapping, abortion and prostitution. In the end, the film received the code number 17011.

Director Otto Preminger previously had released a film lacking the Production Code in 1953, with The Moon is Blue. He told Peter Bogdanovich why he was attracted to Algren's novel.

"I think there's a great tragedy in any human being who gets hooked on something, whether it's heroin or love or a woman or whatever."[5]

Frank Sinatra — who jumped at a chance to star in the film before reading the entire script — spent time at drug rehabilitation clinics observing addicts going cold turkey.[6] The script was given to Marlon Brando around the same time as Sinatra, who still harboured some anger at Brando, since the latter had beaten out Sinatra for the lead role in On the Waterfront. 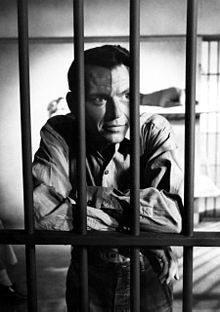 Frankie Machine (Frank Sinatra) is released from prison with a set of drums and a new outlook on life. A heroin addict, Frankie became clean in prison. On the outside, he greets friends and acquaintances. Sparrow (Arnold Stang), who runs a con selling homeless dogs, clings to him like a young brother, but Schwiefka (Robert Strauss), whom Frankie used to deal for in his illegal card game, has more sinister reasons for welcoming him back, as does Louis (Darren McGavin), Machine's former heroin dealer.

Frankie sees his wife Zosh (Eleanor Parker), who is supposedly wheelchair-bound, but secretly fully recovered, after a car crash some years ago. Zosh smothers her husband and hinders his attempt to make something of himself. He thinks he has what it takes to play drums for a big band. While calling to make an appointment, he bumps into an old flame, Molly (Kim Novak).

Frankie soon gets himself a tryout and asks Sparrow to get him a new suit, but the suit is a stolen one and he ends up back in a cell. Schwiefka offers to pay the bail. Frankie refuses, but soon changes his mind when the sight of a drug addict on the edge becomes too much for him. Now, to repay the debt, he must deal for Schwiefka again. Louis is trying to hook him on heroin again, and with no job and Zosh to please, pressure is building from all directions.

Soon Frankie succumbs and is back on drugs and dealing marathon, all-night, card games for Schwiefka. He gets a tryout as a drummer, but spends 24 hours straight dealing a poker game. Desperately needing a fix, Frankie follows Louis home, attacks him, ransacks his house, but can't find his stash of heroin. At the audition, with withdrawal coming on, Frankie can't keep the beat and ruins his chance of landing the drumming job. When Louis goes to see Zosh to try to find him, Louis discovers that Zosh has been faking her paralysis and can walk. Zosh, scared of being found out, accidentally pushes him over the railing of the stairwell to his death, but things backfire when Frankie is sought for murder.

Initially not realizing he is a suspect in Louie's death, Frankie goes to Molly hoping to get money for a fix. After learning the police are looking for him, Molly convinces Frankie that he must go cold turkey if he is to stand a chance with the police. Frankie agrees and is locked in Molly's apartment where he goes through a grueling withdrawal to clear the drugs from his body. Finally clean again, he tells Zosh he is going to leave her, start anew and stand trial. In her desperation, Zosh once again gives herself away, standing up in front of Frankie and the police. She runs, but can get no further than the outside balcony. Trapped, she blows the whistle and throws herself off the balcony to her death. A ambulance then arrives to take Zosh to the hospital and drives away while Frankie watches in dismay. He then walks away with Molly.

The Man with the Golden Arm earned $4,100,000 in rentals at the North American box office and the critical reception was just as strong, with Variety magazine stating: "Otto Preminger's The Man with the Golden Arm is a feature that focuses on addiction to narcotics. Clinical in its probing of the agonies, this is a gripping, fascinating film, expertly produced and directed and performed with marked conviction by Frank Sinatra as the drug slave."[7][8]

Although the novel's author, Nelson Algren, was initially brought to Hollywood to work on the screenplay, he was quickly replaced by Walter Newman.[9][10] The filmmakers proceeded to change the plot and characters extensively, which led to feelings of bitterness from Algren. When photographer and friend Art Shay asked Algren to pose below the film's marquee, he is reported to have said, "What does that movie have to do with me?"[9][11]

Even though the first draft of the novel did not even deal with drug addiction (it was only added later),[12] this became the singular focus of the film. In the novel, Frankie served in World War II and became addicted to morphine following treatment for a war injury. There is little mention of Frankie's film counterpart serving in the war, and he tells Molly that he started drugs "for kicks."

In Algren's book, Frankie is a blond-haired man in his late 20s, and as a poor veteran he often wears a torn Army jacket and brogans. Played by Sinatra (who was nearly 40 years old at the time), the film's protagonist has dark hair and normally wears slacks and a dress shirt. In the film he is given a drum set and almost lands a job as a big-band drummer, but in the novel he only has a practice pad, and his dream of being a drummer is only a fleeting aspiration.

The novel implies that Zosh's paralysis is a psychosomatic symptom of her mental illness, but in the film she is deliberately deceiving Frankie and is fully able to walk.

The book's version of Violet ("Vi") is an attractive young woman and Sparrow's love interest. In the film, she is played by Doro Merande, who was in her 60s at the time. The movie combines the character of her spouse, "Old Husband" Koskozka, with that of the landlord, "Jailer" Schwabatski.

Frankie's employer, Schwiefka, is a villain and Nifty Louie's partner in the movie, but in the book he is a relatively neutral character.

In the film, a walking Zosh accidentally pushes Nifty Louie to his death, but in the novel it is Frankie who accidentally murders Louie.

Algren's story ends with a cornered and hopeless Frankie committing suicide, but in the film Zosh is the one who dies, while Sinatra's Frankie and Novak's Molly survive the end of the film together.

The movie opens with one of the most famous, influential and controversial title sequences in movie history, the animated paper cut-out of a heroin addict's arm, designed and conceived by Saul Bass as a means of creating much more than a mere title sequence, but something that actually enhances the viewer's experience by contributing to a mood built within the opening moments of a film. Bass went on to create memorable title sequences for other renowned films, notably for Alfred Hitchcock's Vertigo, North by Northwest and Psycho.

Similarly, the film's jazz soundtrack (played by Shorty Rogers and His Giants with Shelly Manne) was a landmark in film history; it followed on somewhat from the score provided by Alex North for A Streetcar Named Desire (1951).

The famous theme music was written by Elmer Bernstein. Jet Harris released the theme as single in 1963, Sweet covered the theme song on the UK version of their album Desolation Boulevard, and Barry Adamson released a cover version on his 1988 album Moss Side Story.