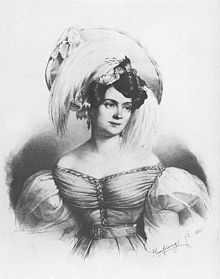 She was the daughter of an estate agent named Pfeiffer. She received her early training at the Munich court theatre, and in 1818 began to play leading tragic roles at various theatres. In 1825 she married the historian Christian Andreas Birch of Copenhagen, but continued to act. From 1837 to 1843 she managed the theatre at Zürich.

In 1844 she accepted an engagement at the royal theatre in Berlin, to which she remained attached until her death. Her intimate knowledge of the technical necessities of the stage fitted her for the successful dramatization of many popular novels, and her plays, adapted and original, make twenty-three volumes, Gesammelte dramatische Werke (Leip. 1863-1880). Many continued to retain the public favor. Her novels and tales, Gesammelte Novellen und Erzahlungen, were collected in three volumes (Leipzig 1863-1865).