Man at the Crossroads

Man at the Crossroads

Man at the Crossroads was a mural by Diego Rivera. 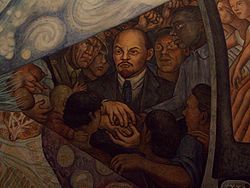 A small part of the recreation of Man at the Crossroads now renamed as Man, Controller of the Universe the famous Lenin portion (depicting communism) which upset Rockefeller.

The Rockefellers wanted to have a mural put on the ground-floor wall of Rockefeller Center. Nelson Rockefeller wanted Henri Matisse or Pablo Picasso to do it because he favored their modern style, but neither was available. Diego Rivera was one of Nelson Rockefeller's mother's favorite artists and therefore was commissioned to create the huge mural. He was given a theme: "Man at the Crossroads Looking with Hope and High Vision to the Choosing of a New and Better Future."[1] Rockefeller wanted the painting to make people pause and think.[2]

The huge mural had many parts including: society women drinking alcohol, pictures of cells (sexually transmitted diseases)[citation needed], Leon Trotsky and finally the famous Lenin portion (depicting communism) which upset Rockefeller.[2] The patron asked Rivera to change the face of Lenin to that of an unknown laborer's face as was originally intended[citation needed] but the painter left it as it was. The work was paid for on May 22, 1933,[citation needed] and immediately draped. People protested but it remained covered until the early weeks of 1934, when it was smashed by workers and hauled away in wheelbarrows.[citation needed] Rivera responded by saying that it was "cultural vandalism."[citation needed]

An assistant, Lucienne Bloch, had taken photographs of the mural before it was destroyed. Using them as a reference, Rivera repainted the mural, though at a smaller scale, at the Palacio de Bellas Artes in Mexico City where it was renamed Man, Controller of the Universe.[2] At Rockefeller Center in its place is a mural with Abraham Lincoln as its focal point.

The Rockefeller-Rivera dispute appears in the fiction films Cradle Will Rock, Anbe Sivam and Frida.